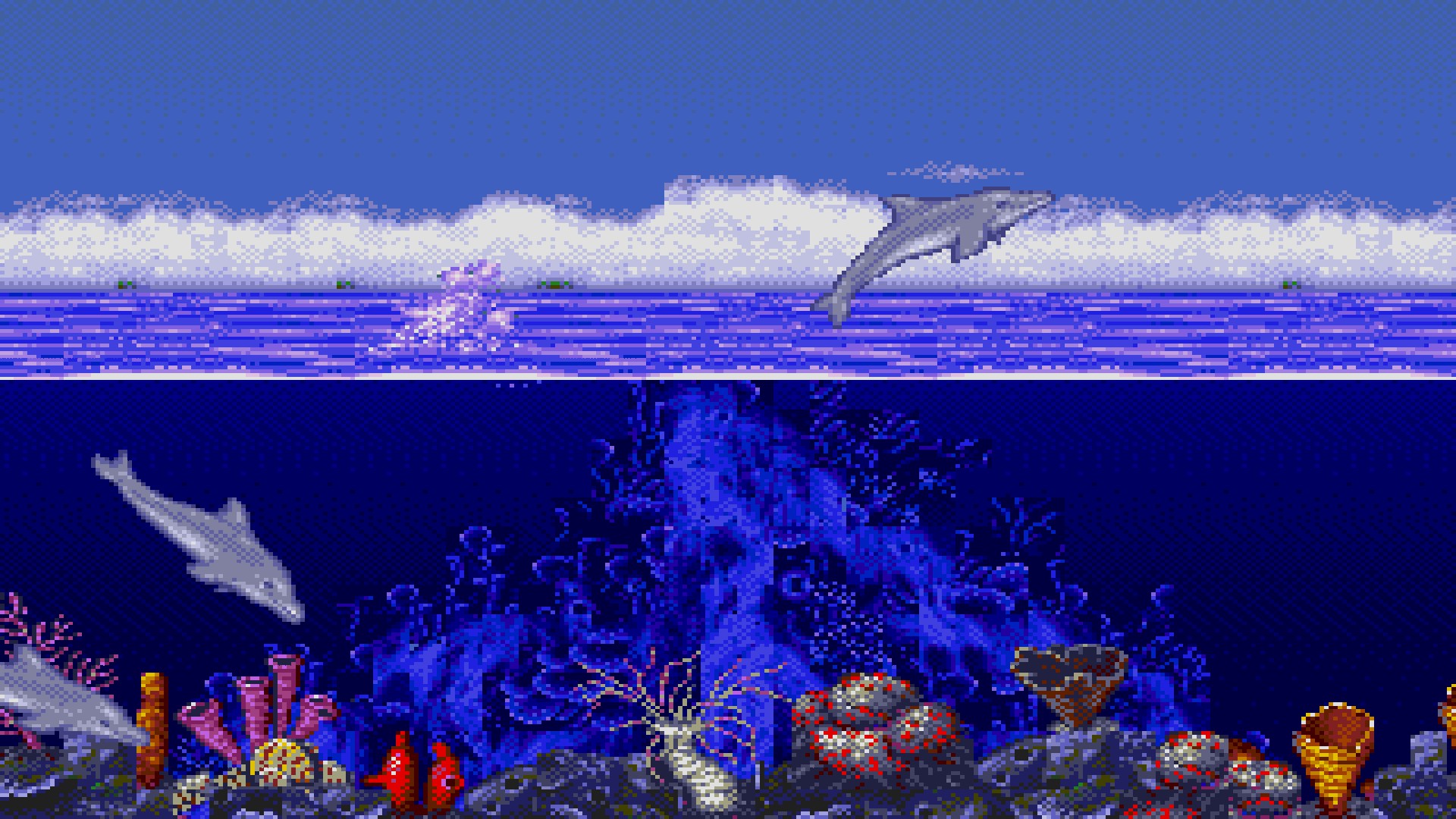 Hi everyone! Welcome to another featured Sound Test. This is my first stab at this kind of feature, so be kind! Today I’m showcasing a somewhat strange addition to the Sound Test batch of games: Ecco the Dolphin for the Sega Genesis/Mega Drive which was developed by Ed Annunziata and Novotrade International in 1992. The music here is composed mainly by Spencer Nilson, Magyari András, and Brian Coburn.

This is a game that, admittedly, I have never beaten, but has nonetheless stuck with me throughout the years from the first scene until game over after game over. For those who have never heard of Ecco, this game is hard as hell! Like, super hard! But the atmosphere, the story, and, most importantly, the music has made a huge impact on me.

The Genesis had a particular music type which was funky and bass driven. For example, Sonic the Hedgehog 3 had hired Michael Jackson to help write music for the official soundtrack (OST) until everyone backed out of that – a story for another time or a quick internet search if you’re keen. Ecco the Dolphin used the Genesis’ chip card to create an entirely different sounding OST. There are still instances of the heavy bass, but they are used for atmosphere and emotion instead.

‘Distant songs are heard but not understood’

Let’s take a step back. Ecco the Dolphin is not your typical game, especially back in the day. The Genesis was known for its beat-em-ups, shooters, fighting games, and Sonic. Ecco the Dolphin is none of those things; it is a story-driven, puzzle-adventure game that is all about atmosphere, storytelling, and emotion. The music presented reflects those three core elements of the game through use of dreamy soundscapes mixed with drone-like synthesizers.

The cover art for this game makes it seem like it might be apart of the BBC’s Blue Planet documentary collection, but in reality this cute dolphin with the stars on his head sends us down a science-fiction horror. Seriously! Play this game and tell me it’s not scary – just listen to the sound Ecco makes when hurt. The story here includes time travel, dinosaurs, and *spoilers* aliens! All of the classic sci-fi elements.

The game starts off innocently with you controlling Ecco by swimming around and talking to your dolphin pod mates. Suddenly as you try to set the world record in jumping out of the water, a giant vortex sucks up your entire pod and the surrounding ocean leaving you alone. Loneliness: the game and music both convey this feeling throughout the entire experience. This is expressed pretty early on with the whole pod’s sudden disappearance to Ecco having to face the dangers of the ocean alone because of that. The music envelopes you as you’re forced down into the harrowing depths, crushing solitude washing through you.

‘Songs of the sea sing of great danger in this place’

Despair and solitude are overwhelming at the beginning until Ecco is given hope about what happened to his pod. Suddenly the music turns more adventurous and hopeful while you’re sent on your way to find answers. As the game and story progress, so too does the music. We start out with more ambient and moody feel while further down the game, the sounds and songs become more laden with electronics and effects.  The backing tracks start off more simplistic and natural – in a synth heavy sort of way – then turns out quite complex as the story and mystery unravels.

“Undercaves” is a unique track especially near the beginning of the game. The main thing we have heard up until now have been sad and gloomy songs, and now there is a jarring, 180 switch up to a more upbeat and adventurous track. This is much needed because it would be hard to want to begin the actual gameplay if we are too sad to carry on. There is an air of mystery to “Undercaves” which is an element present throughout a lot of the music in Ecco The Dolphin, but there is also a tribal aspect which keeps the player motivated to move forward. The genius behind this cannot be overstated and it’s so nice to see the amount of care and thought that went into crafting this game, both musically and gameplay wise.

As you know, dolphins require air to survive and the game plays on this quite well by putting the player into tense situations where it’s difficult to get to the surface for that much needed breath. This is all in place as a reminder that you are alone and are venturing into perilous unknown areas. Crossing the unseen dangers and hardships are immense enough as it is, but knowing that it is to be done alone is something else entirely. The thick layers of droning synth are always there to add to the indication of the overall perils and to carry the weight of the ocean which has been thrust upon your back.

The objective for the game so far has been pretty straightforward: find where your pod is. You accomplish this by talking to other sea creatures and they eventually tell you to speak to Big Blue. After traversing the open ocean and the depths you finally arrive at the house of the old blue whale surrounded by a cave of frozen water. The whale tells you he has heard of this kind of disappearance before and knows of someone who would be able to give you better information. The accompanying music here is just as icy sounding as the landscape around you. There is a delicateness and fragility to the track which feel like the ice crystals you find yourself surrounded by.

Off you go again to find more answers. This is where things go from talking to ocean dwelling animals to science-fiction. The next objective is to find the oldest being in the sea, The Asterite. Now, let’s have fun here, bring to mind the first thing you think of when you hear the ‘oldest being in the ocean‘. That’s right! A multi-coloured strand of DNA!

Okay, strap in, things get bonkers here. The Asterite tells you it’s missing apart of itself and tells you to go to the lost city of Atlantis to find a time machine so you can travel back 50 million years to retrieve his missing bit. Ecco heads off to Atlantis and after warding off many traps you make it only to find a destroyed and barren city. The glyphs left behind all say that the residents have fled through time to escape the constant attack from aliens.

The closer Ecco gets to Atlantis, the more civilised the songs feel. There’s an expected meeting with the lost Atlantians and so the tracks reflect this. Somehow, the “Time Travel” song has an air of curiosity meshed within an awe-inspiring tone fully capturing what I would imagine it would feel like finding Atlantis. Where before you were more or less adventuring going from one place to another, now with the addition of the sci-fi elements, the soundtrack is also indicative of that. There’s a classical influence that’s shown which gives the expectation of a full and flourishing city, but of course we are only met with more emptiness.

Next up is to have Ecco travel back in time to retrieve the missing MacGuffin for The Asterite. Suddenly, we are in the land of Jurassic times! The music is here is pretty amazing. There’s a different level of inquisitiveness that sits behind everything because this is something we never thought we would be able to see – dinosaurs! There is an upbeat pattern played on what almost sounds like sea shells. On top of that is some simple synthesized tones – on one side we have bass, and on the other there’s more of a lead part.

Upon returning the item to The Asterite, we are to be sent back in time to the beginning of the game to where our pod was taken. Now we have learned that every 500 years the aliens known as The Vortex come to feed on the ocean life. It is now our responsibility, a lone dolphin, to stop the aliens completely and thus saving the world.

‘This place has yet been sung’

Everything becomes a little more mechanical and lifeless here. We are suddenly thrust into a world of metal, machines, and aliens. There is no organic life in the next few levels because now we are travelling up to the alien space crafts. The music turns darker and more brooding while the levels give some obvious nods to their inspiration – “Welcome To The Machine” in particular. I love this connection because listening to the Pink Floyd song of the same name really starts to bridge connections to how the songs were made. The use of atmosphere and synthesizers in both “Welcome To The Machine” and the songs in Ecco The Dolphin is something to behold. As I’m writing, I’m starting to wonder if Ecco is what made me fall in love with that particular Floyd song.

The alien levels would not be out of place in a horror movie because suddenly we are faced with what could be Xenomorphs. There are a lot of trial and error elements as the levels get harder and harder. Finally we reach the final boss and holy moly is that a frightening enemy to have in this cute dolphin game. The final fight ensues against The Vortex Queen and we win by shooting out its eyes and its mouth. The song played here is still “Welcome To The Machine” which is a little disappointing admittedly. With all of the incredible tracks it would have been nice to hear something completely unnerving here, especially since the final boss is so terrifying. When you kill The Vortex Queen she essentially pukes out everything that she ate at the beginning of the game – charming.

‘Your song will echo throughout the vast ocean’

And victory! Congratulations you have saved your pod and the earth in the process. The music here is so fun. Really upbeat bass drives the song forward as synthesised leads bleep and bloop out their fanfare! This is such a nice way to end the game because of the contrast between your harsh turmoil and the now lighthearted swimming in formation complete with positive music. It showcases everything you struggled for throughout your entire journey, from empty and foreboding to loved and fulfilled.

Ecco The Dolphin has many elements throughout it. The music is one of the key components to how this game conveys what it needs to. Just listening to the soundtrack on its own gives you the full gambit and experience that the entire game does. It starts you off with foreboding emptiness and adventures with you until the end fanfare. The game would be a much different, and admittedly worse, experience had the soundtrack been anything but what it is. You can pick up Ecco The Dolphin on Steam for only 99 cents right now so there is really no excuse not to play it! You can also find a fantastic fan tribute album on Bandcamp.

What Is the Best Album for Making Pizza? An Investigation