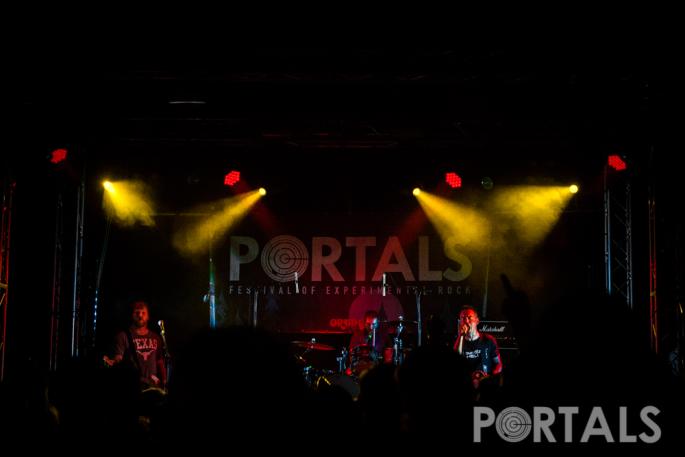 Everything Is Noise at Portals Festival

It is that time of year again, where the sun beats down upon us and festivals are rolled out thick and fast. In the UK, we have an outrageous selection of festivals to pick from, with expertly curated line-ups designed to sate all tastes. Small festivals are blowing up, so when we caught wind of Portals Festival‘s experimental rock-focused roster, we had to try it out.

Hosted over two days in June, the festival took place in three venues inside London. Aces & Eights was the smallest venue, a pokey basement with room for 30-50 people. Boston Music Room was the venue for the second stage, scaling up considerably from Aces & Eights, with the whopping Tufnell Park Dome the mainstage. The ascending size of the stages worked well with the bands playing, and overlapping set times meant there was always a band or two playing at the festival, giving you a splendid choice.

We checked out the Sunday of Portals Festival, despite Saturday looking absolutely brilliant too. Agent Fresco headlined the first day, with excellent acts like Slow Crush, The Samuel Jackson Five, and Salt The Snail also playing. It was, however, the attraction of Lost In Kiev that settled the day upon which Everything Is Noise would visit London for the festival, with the band’s album release party simple tagged onto the end of a great day of music, too exciting a draw to turn down.

Land Wars started the day for us, who were playing Aces & Eights basement. Despite being greeted by a very stuffed room, once I picked up some fine beers from the bar, enough space was available to slide into Land Wars‘ set. Fun math-rock ensued from the duo, with frenetic riffs and crashing cymbals warming the crowd up for the larger acts later in the day. The stage presence of the band was fantastic, they looked like they were having a brilliant time, and told jokes on a par with Devin Townsend and Rody Walker. Definitely worth checking out their tunes and seeing these two live!

After scuttling from Land Wars‘ set back to the mainstage, I missed the very start of Poly-Math‘s show but were nonetheless greeted by an immense wall of sound when we got through the doors. Having caught Poly-Math at ArcTanGent prior, I kind of knew what to expect, but was really blown away by the intense and often dystopian math music played nonetheless. The songs played from their last record House Of Wisdom | We Are The Devil were much proggier in sound and structure than I remember from the band’s previous shows, which immediately got me more hooked than before. The stage show was awesome, the moody lighting complementing the crushing music and the band as rhythmic as their music.

The sound in Tufnell Park Dome was killer too, and really complimented the band’s style, with the thick guitar and drum layers pushed through the room nicely. Poly-Math do dial it back often, and those moments of experimental avante-garde pebbled in between the frenetic guitars played out perfectly on the speakers. The band are hitting the road in the UK in November so be sure to check them out then if you can.

Codes In The Clouds

After another beer pitstop, I moved on to check out Codes In The Clouds, a post-rock band who have been knocking about since 2007. I really enjoyed their set, their emotive post-rock just the remedy after the intense Poly-Math experience. This time in the Boston Music Rooms, the stage size was ideal for the band, and thus their sound came across perfectly. Subtly distorted guitars and tight drumming were found in abundance in their set, and the band certainly lifted the mood again. I can’t really say too much as to why they are different than any other post-rock band, but they certainly were billed right, and allowed punters to catch their breath a bit.

Fitting well with my very post-metal year, Telepathy was a billing I was eager to see. Filling Portals‘ atmosphere with an insidious blend of cinematic blackened post-metal, the UK band worked perfectly on the huge Tufnell Dome stage, filling the room with their melancholic melodies. The black metal elements of the music really set the band apart from other post-metal bands who play more on the cinematic angle. It translates even better into the live setting than it sounds. Make sure to dig into their discography and catch them live in Europe this autumn!

One of Holy Roar Records best up-and-coming acts, Palm Reader have made themselves a key feature on many tour amd festival line-ups, because they can go really damn hard, yet can also appeal to those who don’t truly make the leap into metal from punk. The last time I saw the post-hardcore band, they were sandwiched in between two bands I was dying to see – Rolo Tomassi and Cryptodira – and whilst they tore the stage down, it didn’t quite compare to the bands I knew so well. This time around, however, I was blown away, and I am sold on going to their UK tour later in the summer. The energy they brought to the stage was unmatched throughout the rest of the festival, and the sound was absolutely on point.

You’ll have noticed some gaps in my schedule, and I promise you I did not spend my time poorly. Everything Is Noise got the chance to interview Lost In Kiev earlier in the day, which you can listen to here. I did check in on Vodun, but the allure of the food stand and beer made me leave their set, which in all honesty didn’t really tickle me.

As mentioned prior, Lost In Kiev were the main attraction for me, having reviewed their latest album Persona and, of course, met the dudes in the band earlier. Their set was brilliant, with them smattering their new album in a shuffle across their set to great effect. The dual synths taken up by the guitarists mid-song multiple times were really impressive, their sound sometimes turning Boston Music Rooms into a nightclub before tearing back into dystopian post-rock. This band lived up to all my expectations, and I’m looking forward to seeing them play on their next tour, hopefully for more than a 45-minute set!

Unfortunately for me, UK trains are absolutely appalling past 11 o’clock on a Sunday, so one had to make a quick getaway before Three Trapped Tigers took to the stage. That all said and done, I had an absolute blast at Portals Festival, and will certainly be aiming to turn up to both days next year. Thank you to all the bands, and the organisers for a great time!