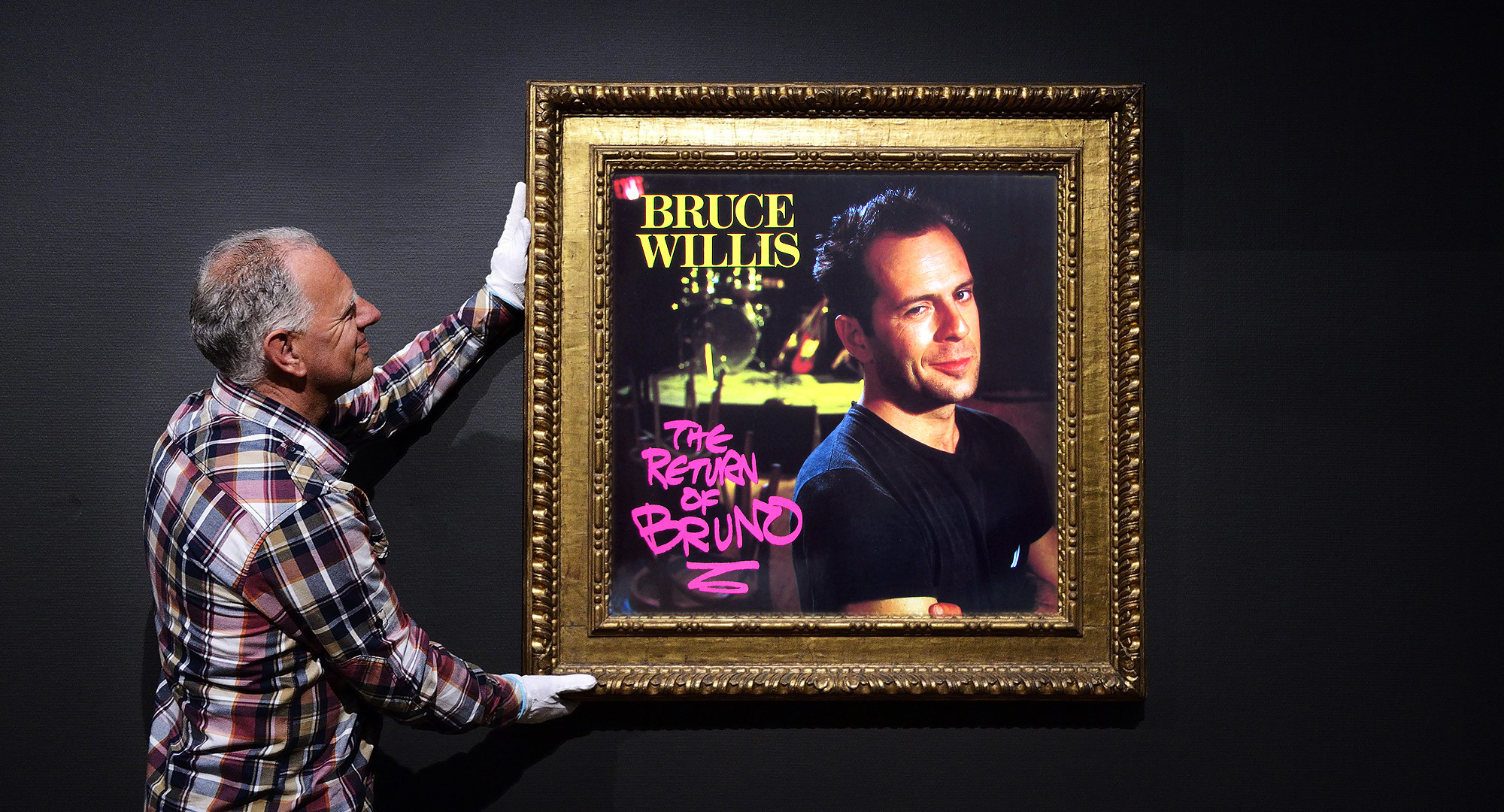 Buy Its Cover: What Album Did You Pick Up Because of Its Artwork?

The reason ‘don’t judge a book by its cover‘ is a saying is because people do. It’s natural, given the sheer quantity of media being thrown at us on a daily basis, that we find a speedy screening metric to help narrow the range of albums to which we want to give more time and attention. Will great albums be overlooked simply because of boring artwork? Unfortunately, yes. Will garbage music squeak through the cracks by way of some slick packaging? Same story. Nowadays, there’s little reason to blindly buy albums without having heard at least something from it. But there was a time when that wasn’t the case, and there was nothing quite like being so enthralled by a cover that one simply had to know what music it was attached to. Here, sourced from the EIN staff, are a few such tales:

When I was thirteen years old, I was terrified of the ocean. It was a phobia based less on its immensity (though that was most certainly a factor) than on its stubborn opacity. What’s it trying to hide down there? And why the hell would I get in to find out? Needless to say, my fear bred, and was fed by, fascination. Sharks, whales, giant squids, angler fish – if it was ooky and lived in the ocean, I loved it the way I love a good horror movie.

So the first time I saw the cover for Mastodon‘s Leviathan sitting on the new release rack at FYE, as though the album for which it fronted weren’t destined for legendary status, as though it wouldn’t go on to become one of the defining albums of my turbulent high school years, as though it wouldn’t pull me further into the sonic landscape of ball-twisting riffs and strangely-enunciated screaming, as though I wouldn’t make a close friend in college simply because we both wore a Mastodon shirt to class one day…well, it was like the part in the horror movie where the monster leaps out and the orchestra sneezes. You’re startled, and then you laugh, because how silly it was of you to be startled. It was just pictures and sounds.

Well, I had Paul Romano’s terrifying, badass seabeast punching me in the face with its cheeky little ain’t-I-a-stinker grin, but I’d yet to have my ears boxed. I’d had a banner summer mowing lawns that year, and so bought Leviathan on a whim. I was naive enough to believe that an album with artwork like that had to be a beast, and Mastodon certainly wasn’t about to disabuse me of that notion (they even had the decency to ensure The Hunter had ridiculous artwork, which shows their commitment to the correlation). I don’t know if I’ll ever experience anything like the full-body whipcrack that sped up my spine as “Blood and Thunder” announced my newest musical obsession to me. Part of its power was derived from the sheer unexpectedness of its arrival. The lion’s share of the credit goes to the music itself, which is and will remain a high water mark of modern metal. But that artwork, man. The synergy between the image and the sound is pure fury.

I’ve already said that I judge an album by its cover, and it’s true. Damn true. Before the internet, the only way to hear new music was a combination of the following:

Of course, I bought a few duds over the years, but I’ve also discovered some real classics and a more recent find was The Odyssey by Horisont.

I was browsing through the usual prog and metal sections and this cover just jumped out at me. Look at the thing, how could you resist!? From the spacemen with frikkin-lasers, the 2001-like embryonic baby to the alien silhouettes, it’s got everything that a prog album should have.

Flip the thing over and you see this:

The band members even have space cruiser job titles, from Laser Specialist, Mechanic, Weapons Control and more! Ok, this is bonkers.

Wait! There’s more! It’s a bloody gatefold and has a full comic on the inside. Man alive!

The whole package is something to behold and I knew it would either be a classic, or just terrible. There was only one way to find out. On getting home and winding up the turntable, I was not disappointed. In fact, I had found a new favorite album that sounds like a combination of The Darkness and Deep Purple. Awesome melodies, ridiculous lyrics, and superb musicianship make an album with absolutely no duds. Epic tracks like the 10 minute “Odyssey” and “Timmarna” are mixed perfectly with accessible retro rockers like “Break The Limit” and “Bad News”. Just brilliant.

Thank you Horisont for creating a musical experience that I will never forget.

It was only relatively recently that I started getting into the relentlessly crushing vocals of death metal. Growling and screaming was a-okay in my books, but I preferred to either have a balance of cleans or for the music itself to be the focus. Hard cut two years back to the summer of 2016, and I’m perusing, meandering, and killing some time in a record shop’s absolutely massive two and a half rows they have in place for their metal section. After the third or fourth time reaching the “F” section, I noticed my eye getting drawn to the same place to a band I’d only really heard of peripherally online: Fallujah.

There was something about the painterly palate and the striking contrast of soft darks and ethereal light emanating from the distorted framework of the abstracted human on the cover of their Dreamless record. It had a good flow to it, and, as the eye wandered, it saw more intricacies in the smaller details. I wanted to know what kind of music a band with a cover like this could possibly make, so I pulled out my phone, snapped a picture of it (a practice I still often use), went home and pulled up YouTube. It took less than a minute to come to a conclusion: I hated it! Or, at least, I didn’t appreciate it at the time. I’ve since come to revel in the intensity and grooves the record has to offer – and death metal in general – but I still think back and laugh at the anticipation and mild let-down of that day.

People often say don’t judge a book by its cover, but I say ignore that. If something looks cool and interesting, pull out your phone and snap a picture for later. You have nothing to lose from trying something new, and you’ll never know what surprises might come from a little exploring.

In 2005, I discovered, (as did many others) the amazing Ghost Reveries. And so began my lengthy delve back through time and into the archives of Opeth. During this, my home town of Wrexham, North Wales contained a shop where you could buy brand new CD’s dirt cheap. I near-enough managed to obtain the entire Opeth discography in the space of six months, and one day I came across the band’s comparatively raw 1996 second album, Morningrise. As the Opeth connoisseur knows, there are many black and white Opeth album covers. But none are quite so ominous and photogenically ragged as Morningrise: An old stone bridge resting above a shallow lake, photographed somewhere in some surely unknowable corner of the world, its placid mysteriousness evoking a true sense of prog/black metal bewilderment. Well, at least that’s how I saw it.

In many ways, the cover captures the music excellently. Back then, Opeth were extremely avant-garde in their approach to prog metal, providing listeners with songs up to 20 minutes long. Acting as part two of Opeth’s proclaimed Candlelight years, Morningrise was bold, honest, and technically simple compared to the layered values of Opeth’s Music for Nations and Roadrunner releases, but still intense and beautiful for it. It’s the Opeth album I keep gravitating back to. The brashness of Mikael Åkerfeldt’s vocals and the stripped eloquence of the music renders this a unique experiment, and an understated cornerstone in Opeth’s timeline. It means a hell of a lot to me.

In 2007, I moved to Bath. I got a job in my friend’s cafe. One day we took a walk to the Prior Park Landscape Garden, a UK National Trust site which is only a 20 minute walk from the cafe. I couldn’t believe my eyes…

There it was. The Morningrise bridge. Not a lookalike, but the actual real bridge… Or as it’s actually known, ‘The Palladian Bridge’ in all its technicolour sandstone glory! And what you cannot see on the 1996 Opeth album cover are the numerous dated messages of residents, some going as far back as the 18th century, etched in the stone, an ancient legacy right there for public absorption…

I hum the opening riff to “The Night and the Silent Water” every time I visit it, a reference nobody gets it but me and my friend Sharpy. Not even the people who work there… which is a disgrace.

Back when buying CD’s was still cool, I would go to the local record store every Tuesday to see what new albums came out each week. Most of the time, I’d walk out with some new music. This was early 2004. There was an album in the hip hop section, which I didn’t really frequent. At the time I was strictly a metalhead. The only hip hop I was into back then was Eminem, Outkast, Nas, and The Roots. Little did I know, my hip hop world was going to be turned upside down.

I was an angry teenager, which kind of coincides with me being a metalhead. I also, ashamedly, was a singer/rapper in a nu-metal band. My built-up anger made writing angry lyrics extremely easy. While I was in high school, the first real big school shooting in American history took place – the one in Columbine, Colorado. I read that the shooters used semi-automatic hand guns called tec-9’s. Being the angry nu-metal lyricist, I somehow managed to add using a tec-9 in just about all of my songs.

So there I was, wandering away from my familiar rock and metal section to the unknown hip hop territory. Staring right at me was this dude in all red. I’m talking shirt, shorts, and shoes. He also had long red hair standing up. Without even listening or knowing anything, I was strongly drawn in to this album cover. I wanted to know more. The kicker was his name: Tech N9ne.

At first I was like, ‘dude stole my name’. But I didn’t get mad. Instead, after weeks of him calling out to me, I took home Absolute Power, Tech N9ne‘s fourth studio album. I’m glad my curiosity got the best of me, because Tech N9ne became one of my favorite rappers. I’ve been a Technician ever since!