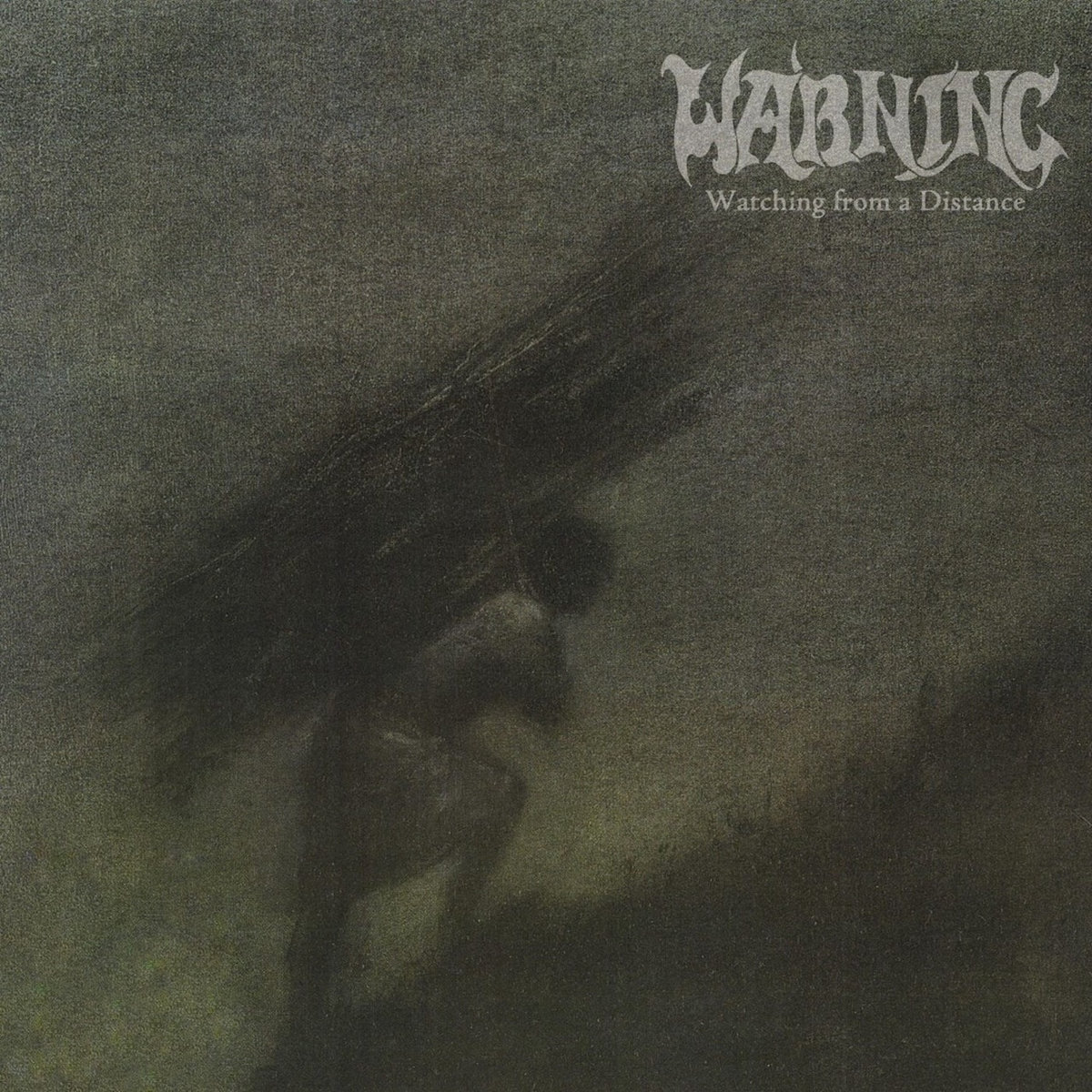 A SCENE IN RETROSPECT: Warning – “Watching From A Distance”

By Dominik BöhmerDecember 18, 2021 No Comments

Warning. Watching From A Distance. I don’t think there is a single (metal) band or album that could evoke the same depth as Patrick Walker (40 Watt Sun) and co. with this one back in 2006. It’s devastatingly, gut-wrenchingly emotional from start to finish, and making it from one end of it to the other requires immense fortitude, or at least the maturity to be at peace with your inevitable emotional response to its contents. Doom metal has a proclivity for somber, downcast portrayals, but this… this is a whole new level.

My dear colleagues Jake and Carlos answered my call when it came to writing about this behemoth, and I think that you will be able to relate to their personal connection(s) to Watching From A Distance.

‘But I’m afraid of the way that I’m feeling
Afraid of this new understanding now
Afraid for the beauty within me,
And that which I hold within my hand‘

A little bit more than a decade ago, I thought I had everything figured out. My naivety propelled me into feeling so confident that I had gone through every spectrum of the metal genre and its more extreme varieties – that is, until I stumbled upon Watching from a Distance.

This album might not seem much at first glance: crushing doom metal at its most elemental and in just five songs, each of them spanning over 7 minutes in length. If this alone sounds to you like your run-of-the-mill doom record, then I’m excited to say that you’re in for quite a surprise. I’ve yet to find a doom metal album – let alone a metal one – that portrays the feeling of forlornness as intense and palpable as this crowning achievement from Warning.

Watching from a Distance is an experience I personally think no one was, is, and will ever be ready to face; I certainly wasn’t when I first discovered it. Even the album cover emanates a certain bleakness that is unmatched to this day, portraying exactly how the whole thing is sonically. Right from the initial pummeling notes off the title track, you’re in an automatic trance. No questions asked – you simply are. It’s truly a strange sensation that just keeps you glued to your seat for the remainder of the album. This is because (as clichéd as it sounds) vocalist Patrick Walker and company let the music speak for itself.

Warning does not waste time with embellishments or fancy production choices here. The simplicity that they bring to the table for this album is more than capable, taking into consideration the pure and unfiltered emotions bleeding through each strum and wail. Take “Bridges” for example: I find this song to be the simplest (and, factually, one of the lengthiest) of the bunch, and yet the sheer sincerity and power of the performance is enough for you to endure the whole of it without your noticing.

Of course, this discussion is not possible without pinpointing out Walker’s vocals. Good lord. I think this is the very aspect that sold Watching from a Distance to many people, including myself. Coupled with the colossal instrumentation, the theatricality and morose delivery of his voice is an inescapable thunder, shuddering you with such an intensity that you’re left with no choice but to be awestruck by it all. The latter half of “Footprints” still stands as one of the most stirring moments in metal for me – truly an impeccable example of the heights doom metal can venture emotionally. Each song is ridiculously immersive in their own way, leaving you in a barren field desperately looking for a long-lost love, or for an answer to your unexplainable feelings when confronting change.

You know, that last sentence is precisely the reason why this album stuck with me since day one. Look, I was in my late-teens when I happened upon Warning and Watching from a Distance – careless and ignorant about the world and the self. Experiencing this album, especially with songs like the aforementioned “Footprints” and “Faces”, put me in a clusterfuck of moods for days, trying to make sense about what I had just listened to and about this sense of… hopelessness(?) I had been feeling as a result. I shit you not, there were times where I was straight-up hesitant to go through the album again because it was that shocking to me.

Expanding further upon that thought, it’s astounding how music as simple as the ones found on this album can uncover quite a hefty range of complex emotions, really. Even to this day, I still find it a bit difficult to go through it in its entirety – that by itself speaks volumes and is a testament to the magnitude of this record. It has been 15 years since its release, and it still stands unrivalled: no outer, evil forces are spoken about here, there are no moments of treading onto fantastical lands from ye olden times. Watching from a Distance is all about pain and how we process it internally, and honestly, how much more doom can you get after that?

The oversimplification of Warning as just ‘sad’ music is a mistake that many people have made over the years. As with all things, perspective is key, and while Patrick Walker and friends definitely lean into the bluest hues of the emotional spectrum, there’s more here than just slow, sad music. The title and title track of “Watching From a Distance” signals that this small collection of thoughts is a deeply moving and achingly deep album. The sentiment of watching from a distance can be looked at in multiple ways on the surface, but my take is that the band decided to just plant their flag in a single definition of this idea. “Watching from a Distance” is an account of longing, deep longing, ache, remorse, and resignation. Each of these nuances are painfully real, and what’s more, every time I hear this song, I feel it just as I imagine Walker does as he sings. The timbre of his voice, the lurch at which the song moves, and the incredibly vulnerable lyrics are all weighty components of their own, and when combined in this opening track, it feels almost too much to bear from the start:

‘[…], I have no sword at my side. I leave behind me the ruins of the fortress I swore to defend;
I leave behind me foundations; I’ll leave you a man I’ll need you to mend.
And through all the battles around me I never believed I would fight.
Yet here I stand, a broken soldier, shivering and naked, in your winter light‘

Warning are magic, plain and simple. Few acts can slowly and deliberately open your heart and pour in their own sorrow to the point where you can’t separate it from your own. The feelings of loss, helplessness, and sorrow are dispensed in a way that few other acts can do. While it’s reasonably true that a picture is worth a thousand words, with Warning a version of the inverse is true. The above lyrics, while concise, tell a massive, emotive tale by using deep metaphors that resonate and ring out with each chord stuck on the guitars. Of all of the lyrics on this record, the ending of “Bridges” sends me into an emotional spiral every time I hear it:

‘I read over all you wrote me. The words mean so much more these days. They echo in my soul. They sting me like a bug. Can someone feel too much? I wish you were here with me tonight.‘

I’d be remiss if I failed to mention that along with all of the emotional authenticity, the musicianship, production, and arrangements are always spot on with this album. The guitars are complimentary in every way and emotional punctuation is given by the rare-but-perfect drum fills that send the lyrics not only into your brain but to the back of your spine as well. When the instrumentation does steal the show, such as the beginning moments of “ Faces”, it’s a quick but welcome diversion.

As with all doom albums, duration can be a concern. Slower-paced songs, especially when saturated with this much emotion, can be a lot to absorb. Let’s just say that keeping this one at under 50 minutes was a wise decision, as each song has plenty of space to wash over me and verges on exhaustion but never crosses that line. “Echoes”, the ten-minute closer, is a fitting way to close Watching from a Distance. Each time I listen to it at the end of the album it lets me go on my way with a dash of hope, still tinged with restraint. There’s no album like Watching from a Distance, and there’s no band like Warning.