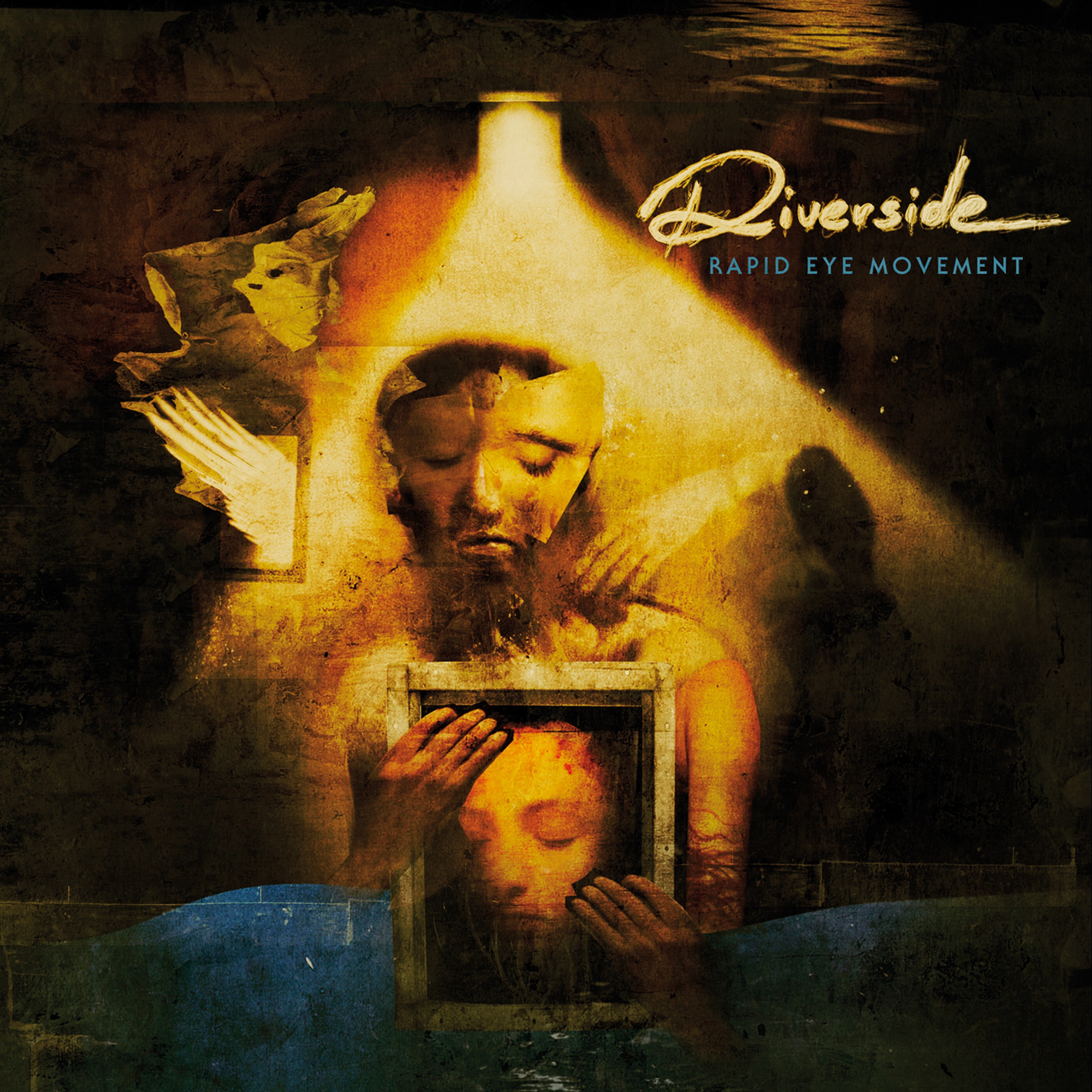 Europe has seen its fair share of highly emotional prog rock over the past few decades, culminating in the presence of bands like Porcupine Tree, Anathema, and the subject of today’s episode of A Scene In Retrospect, Riverside. The Polish prog flagship has released a good handful of lovingly crafted, touching records over the course of eighteen years so far; the one we will be looking at in particular is 2007’s Rapid Eye Movement. In the following, our editors David and Jake, together with staff writers John and Scott, will be sharing their views on this album. Please enjoy!

Rapid Eye Movement is the final album in Riverside’s Reality Dream trilogy, and it’s pretty fitting, since it has a tone consistent with finality. Their third album overall, it also saw the Polish band fully grasp what it meant to stand out in this new, wild millennium of progressive music.

Channeling established peers like Porcupine Tree or Anathema, it’s not that Riverside saw fit to emulate them or anyone else; rather, they settled into a spot that could comfortably coexist with them and other prog rock bands. More importantly, it’s also arguably the stylistic middle ground between all the different sides of Riverside that have come to be known in their near two-decade existence. It’s like all-you-can-eat day at the prog buffet.

“Beyond the Eyelids” and “Parasomnia” flirt with metal, containing heavier material driven by guitars and even harsh vocals and screams. It’s heavy enough to land the album and band on Encyclopaedia Metallum, as baffling as that sounds. “O2 Panic Room” has a mechanical, industrial flair that sets it apart from everything else, especially when accounting for that total structural change at the end.

“Through the Other Side” captures this wonderfully exuberant gentleness that’s really hard to nail – not too somber, yet doesn’t betray the emotional weight that does exist. It’s something that’s captured a bit on a future album Love, Fear and the Time Machine, albeit not quite as succinctly. It feels so all-encompassing. At this time, ‘generic’ wasn’t even in Riverside’s vocabulary. They walked the razor’s edge between heaviness, melody, progression, and atmosphere – all culminating in a foreign feeling mood that’s just…so good.

There’s a lot going on with Rapid Eye Movement, but it’s never overwhelming or threatens your senses. Much like REM sleep, it stimulates and fosters vividity in a listener’s mind, weaving memorable, grand pictures and stories with color and textures that stand the test of time. This is where Riverside crossed over into progressive greatness, where they continue to test and challenge fans with nuance after nuance. At least in my opinion. Get your dream journal out and give it a spin.

Heck yeah, I get to talk about Riverside! These Polish prog rockers have such a hypnotic hold on me with their labyrinthine compositions, rich vocals, and cathartic-yet-catchy melodies. To be frank, this band is a somewhat recent acquisition for me; however, in the few years that I have been perusing their catalog, Rapid Eye Movement stands out as highlight in their rather pristine career. The opening moments of “Beyond The Eyelids” are timelessly gorgeous with layered harmonies, grand instrumentation, and a groove that that settles things down, only to have it all upended with staccato riffing. Don’t even get me started on those vocals. Actually, yeah, let me talk about those too.

Mariusz Duda is absolutely one of my favorite vocalists in progressive music. His often subtle and understated approach paired with that golden timbre are one of the differentiators for Riverside. From his aggressive leanings on “Rainbow Box” to the intricate navigation of “Schizophrenic Prayer” and “Through The Other Side”, his signature voice elevates each track on this record.

I should also mention that my favorite track on this masterpiece is the proggy-fresh “Parasomnia”. The vocal-only lead-in is a nice, somewhat jarring way to jump into a song. It’s an immediate attention-grabbing move that really pulls the listener in – it’s so smart! Then that sweet bass line drops in, and is quickly surrounded by and organ that really gives it a classic prog feel before those modern riffs get the baton handoff to take it to the finish line. Placing this song right smack in the middle of the tracklist was a savvy move from the band, as it sets up the second half quite well, while being a massive moment on its own.

Rapid Eye Movement is an obvious reference to dream state, and it only takes one listen to understand why. It’s an effortless and dynamic set of songs that genuinely play off of one another and weaves them all into a potent and effective fantasy. “Ultimate Trip” closes the album aptly by letting this band flex their compositional muscles throughout its 13-minute duration. It’s haunting, technically impressive, and just damn amazing.

I could talk about Riverside for days; they have found that exact spot to my soul and have cooed me into being a lifelong fan. Graphic details of my inner workings aside, Rapid Eye Movement was oddly an album I hadn’t realized got released at the time. I had been obsessed with their earlier albums, and just completely missed out on this one until many years later.

But Riverside have always been about second chances – righting a wrong and moving on – so years later, I discovered this album, and it was a(n ultimate) trip back to their early days. It marked a bit of a stylistic turn for them. Their early albums had a progressive hard rock feel, and with Rapid Eye Movement, there exist some slight subtleties in their tonal shift; to me, there is more emphasis on the keyboard and ambience.

Stylistically speaking, there’s a lot more chanting, à la Lunatic Soul – you can really hear some early workings of that future project on this album. And speaking of early workings, there are also a lot of moments that lead up to Riverside’s ambient album. All of this to say that Rapid Eye Movement is Riverside in their prime. Every song is expertly crafted to such great detail that it is really hard to choose a favourite. Although I will, of course.

Talking specifically about Rapid Eye Movement, I’ll put it simply: this album is amazing. It is the perfect embodiment of the classic Riverside formula – it has the short, heartfelt acoustic songs, the long prog epics, and the regular-length songs. My favorites of the album are “Schizophrenic Prayer”, “02 Panic Room”, “Ultimate Trip”, and “Embryonic”. But to be fair, you could pick any song on the album and get a full experience out of it.

I would also be remiss if I did not mention Piotr Grudziński. His guitar playing here is of course top-notch. He had an ability to take Mariusz Duda’s bass lines and add his own very unique and personal flair to them, which ended up creating their signature sound. There will never be another guitarist who is a better match for Riverside. R.I.P. good sir.

I got into Riverside through an iTunes suggestion. Whenever I bought an album from Opeth or Porcupine Tree, iTunes would mention them. I finally gave in, and immediately fell in love. This was some time in 2008 or 2009, so they didn’t have many records out at the time, but I downloaded them all that night. Rapid Eye Movement was the highlight.

Riverside definitely have their own signature sound, the first constituent element being Piotr Grudziński’s ambient guitar layers. Mariusz Duda’s bass tone always cuts through with his intricate bass lines. Duda’s vocal melodies are also very unique and catchy. Lately I have been enjoying Riverside‘s newest effort Wasteland. When I cracked open Rapid Eye Movement again for this review, I quickly remembered why I was immediately hooked.

It’s a very accessible album. Not too heavy, but still heavy. Not too technical, but still pretty technical. One thing Riverside have always done well is play around with time signatures where the grooves are so solid that it doesn’t sound like odd time. It doesn’t feel forced or pretentious like many prog bands. Being a more underground prog band, they don’t necessarily have radio singles, but the two songs that really stand out as the singles would be “Rainbow Box” and “02 Panic Room”. They’re more straightforward but very well-written and memorable.

The albums is also spaced very well. The longer, more proggy numbers are the first, middle, and last songs, respectively, with the final song “Ultimate Trip” being just that: a 13-minute trip through Poland’s finest progressive rock. They also display their niche for beautiful ambient music on this record with “Through The Other Side” and “Embryonic”. About ten years later, Riverside released a double album, Eye of the Soundscape, which is much like these two songs.

Rapid Eye Movement is a great album for someone who is looking to get into Riverside, mainly because it features all their strengths. You have their technical side, their more poppy side, as well as their stripped down, simpler side. All in all, a wonderful collection of songs. It’s going right back into the rotation for sure.

That’s all for today! What are your thoughts on/experiences with Rapid Eye Movement and Riverside in general? Do you have any suggestions as to what band or album we should include in this feature? Let us know in the comments, either below this article or in the comments section on Facebook.

See you all in two weeks for another retroactive discussion of a record that’s near and dear to at least a select few of us here at Everything Is Noise. Until then, stay safe, and as always…