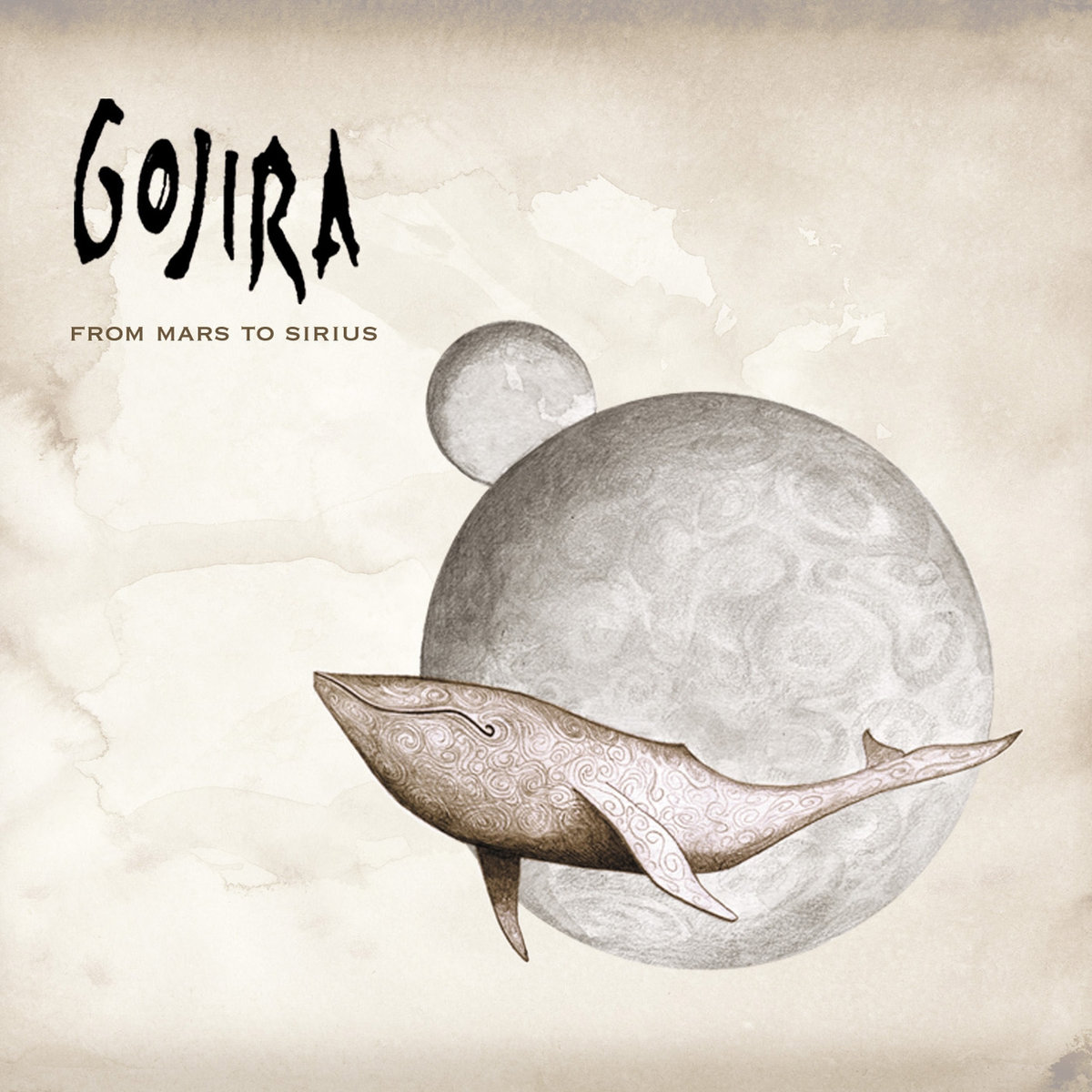 A SCENE IN RETROSPECT: Gojira – “From Mars to Sirius”

By Dominik BöhmerAugust 18, 2018 No Comments

Not many of the bands and albums we have featured on A Scene In Retrospect so far deserved the tag ‘heavy’ – in the broadest sense of the word – as thoroughly as today’s subject of examination, Gojira‘s From Mars to Sirius; none of them carried an equal dedication to a (political/societal/environmental) cause, either. That makes this one of the more special episode of the feature, so please enjoy as EIN team members Inter, David, Rodney, and Ashley run you through their opinions on the record in question.

It’s the cross between borderline universal metal appeal and unreplicable distinctive flavour which makes Gojira’s third trailblazing album so special. I believe it can also be said that From Mars To Sirius was what metal was built for; it was just that nobody had realised it yet. Heaviness. Brutality. Rage. The album is a musical dictionary for all of these words. Who knew that the secret to utilising mind-blowing heaviness was actually a fairly linear process? Well, Gojira did. But there really is so much more to it than that.

The album, for all its upfront abrasiveness, is also filled with sadness. It’s a cry of remorse for the unruly descent of humankind in the modern world. And vocalist Joe Duplantier, whose voice is consistently harsh, touches on the more mature side of negative emotion. There are no foul-mouthed, declarative statements in his lyrics. His is the muse of a person who has all-too-late arrived at the apocalyptic wasteland of man’s self harm. He also serves as an advocate of the natural world, whose beauty is tarnished by the same beasts to which he is related.

So mentally and physically locked in are Gojira’s four members that each note played on this album is a concentric ring model of guitar, bass, drum, and voice, all executed with the stamina of an airborne whale. Trust me, I’ve seen them do this live. From Mars to Sirius is a naturally crafted occurrence in metal music. “Backbone” is an explosive beast which is really only comprised of four parts. The same can be said for several other songs on this record. Also consider “The Heaviest Matter of the Universe”, a mechanically perfect tour de force, and “Flying Whales”, a decidedly awesome example of the album’s overall attributes balanced finely in one track.

From Mars to Sirius is the ultimate showdown of energy and angst, a carnal display of rage and poignancy. It is also a heart-and-soul demonstration of technical proficiency from a band whose energy and musical talent is as anomalous as the gritty natural lore they depict in their music.

Not too long ago, I stumbled over Gojira‘s studio version of “Global Warming“, a song that they haven’t performed before, but decided to record due to its growing lyrical importance. Watching the band perform this huge track, which also closes From Mars to Sirius, made me realize once again how great the record is.

Gojira, beside Opeth, completely reconstructed the term ‘progressive death metal’. These Gojira-esque scratches are what makes their music sound so unique. They definitely reflected on other, later bands like The Safety Fire. The second important aspect of Gojira‘s music is the rhythmic work that is similarly intriguing as the rhythms of Meshuggah. Meshuggah take the logical and mathematic way; Gojira make their grooves vivid and devastatingly heavy while not necessarily focusing on them too much. Also they never lose their melodic focus, which I really enjoy on all of their records.

When thinking about this record, another two songs instantly cross my mind: “The Heaviest Matter Of The Universe“ with its great heavy metal riffing, and the following “Flying Whales“. I love the conceptual side of the whole record and how Gojira worked with whale samples on this one. The artwork also shows the flying whale, and it looks as majestic as it sounds. Each and every song has this pure and raw energy, while Joe Duplantiers vocals add emotionality to Gojira‘s sound.

From Mars to Sirius might be the most important record for Gojira‘s career. I’m not saying that L’Enfant Sauvage is a worse album, but the songs on From Mars to Sirius made them what they are today: one of the most important European metal bands. For me personally, “Global Warming“, as part of this record, is a warning for humanity. I know that Gojira is sometimes called an ecological metal band, which is something worth supporting. Our environment suffers from our lifestyle, and it’s time to (finally) open our eyes.

Gojira, as their name might imply, are monolithic in progressive metal. While much of their music deals with larger-than-life themes, making music to match that scale, nothing is quite as massive as their third and most celebrated album, From Mars to Sirius.

From singer Joe Duplantier’s memorable, memetic bellow of ‘WHAAAAAALES’ on the track “Flying Whales” to the album’s deceptively heavy and unorthodox structure, any of us could easily cross the thousand-word mark talking about this album. But really, it’s a concept album that speaks for itself lyrically, thematically, and musically. It focuses on harmony with, and compassion for, the natural universe. Whether it’s in regards or to our planet or to each other as living beings, it’s presented as a journey for enlightenment. The band has dissected the concept a bit in several interviews, most recently one with Decibel when the album was entered into the publication’s Hall of Fame.

The music is quite fitting of such a huge concept. Groovy licks and descending melodies in “Where Dragons Dwell” evoke the contours and craggy angles of steep mountains and cliff faces. “Flying Whales” is serene in its approach to catchy riffs, much like a whale’s call. Hypnotic and repetitive rhythms thicken up “From Mars”, then expand into progressive metal glory for “To Sirius”. The instrumental heft is always present, and it’s presented in an epic and self-serious way. It’s executed well here, and doesn’t daunt a listener, which is rare for material like this.

Earlier, I described the music here as ‘deceptively heavy’, and it is. It’s not the heaviest music to be put to tape, nor is it the fastest, darkest, or most brutal, but the sum is more important than the parts. With a galaxy-sized concept, progressive song structures that shift like earth during a quake, and instrumentation that’s relentlessly dynamic like the ever-changing waves of an ocean planet, From Mars to Sirius is colossal. Whatever Gojira album you like best – if you like any of them at all – you can’t deny this one’s presence.

Ask around some metalheads, and you’ll probably get your ‘What’s the best metal album of the last 20 years?’ question answered with Gojira‘s From Mars To Sirius. And with good reason. This album is the epitome of a sophisticated metal album, which never loses any of its brutality and heaviness. Not at all. Much more, the still relevant topics, the dense atmosphere and the progressive approach add to the impalpable heaviness, making it one of the most energetic metal albums I’ve ever heard.

Goijra‘s influence on the metal world, together with their standing, is undoubtedly immense. For more than 20 years, the French band releases thoughtful and intense material, but it’s safe to say, while I really love all their other albums, From Mars To Sirius is their magnum opus. There is a certain crudeness within this album, accompanied by nearly surgical precision and timeless lyrical themes, which makes the experience so rich and never-ending. Why the technicality on the album is astonishing is never the focus. Gojira build atmosphere, more and more with every track and every chanted line.

I never found the right words to describe how the band managed to combine the wide epicness with incredible intimacy. From Mars To Sirius tells the story about a dead planet, and how economic destruction as a war against nature causes wars between humankind. A perfect metaphor for the battlefield which can seethe within ourselves. The contrast set by whale songs, which you can hear again and again throughout the album, is the real magic of the album. Whales as a symbol of nature, freedom and weightlessness against the crippling and destructive wars we cause on our planets and in us.

C’est tout pour l’instant, chers amis, et donc…*cough* sorry, my French studies took over for a second there. What I meant to say was: that’s all for the moment, my friends! What are your thoughts on this album, and on Gojira in general? Are there any records (no matter the genre) you’d like to see included in this feature? Leave it all in the comments!

Hopefully I’ll see y’all back here for the next episode of A Scene In Retrospect in fourteen days! I can already promise that it’s going to be a great one, so make sure to not miss out on it. Until then, though, do stay safe, and as always…