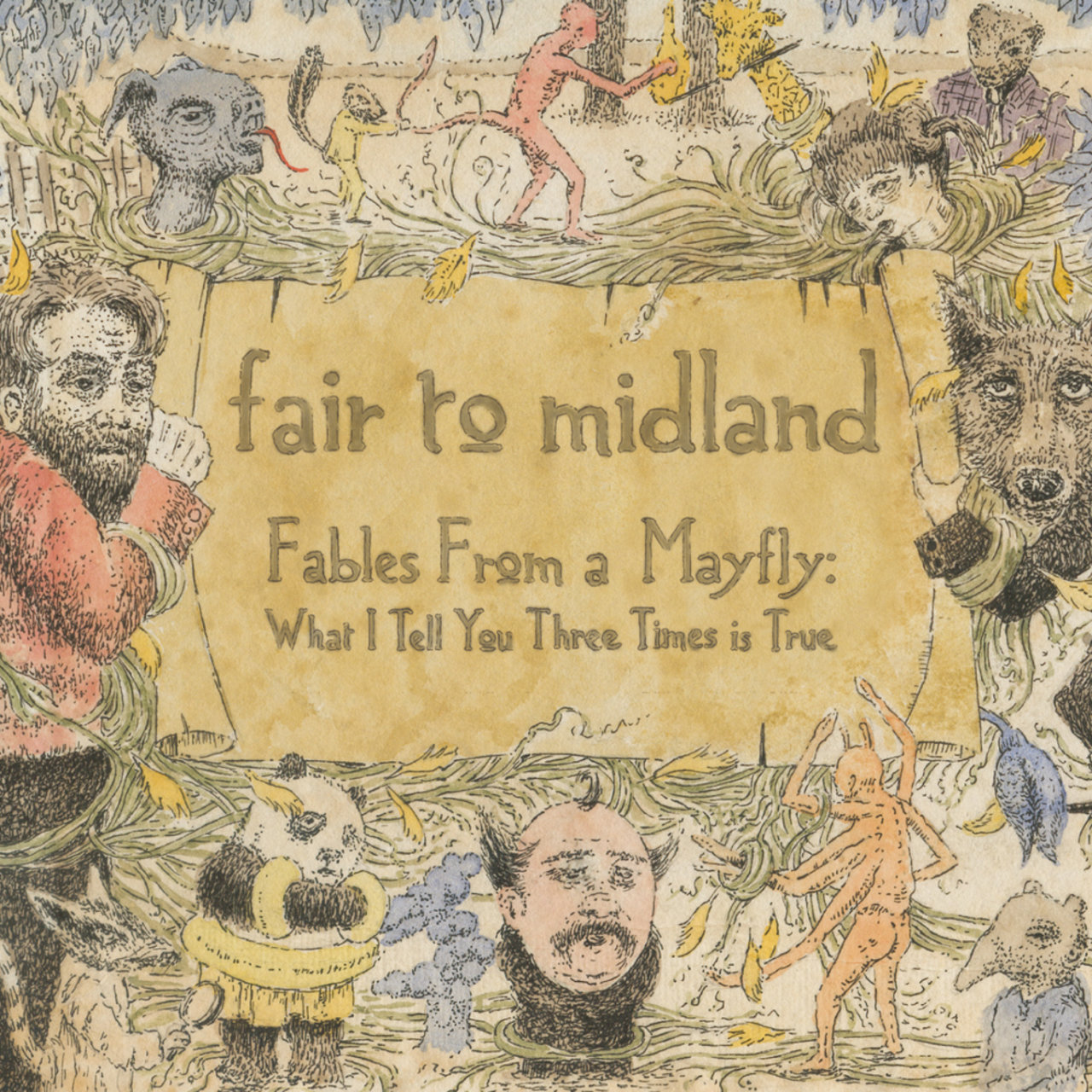 A SCENE IN RETROSPECT: Fair to Midland – “Fables From a Mayfly”

By Dominik BöhmerDecember 22, 2018 No Comments

This is the last episode of A Scene In Retrospect of 2018, and what a record we chose to act as a send-off! To be honest, this might be one of those episodes where the nostalgia stings the most, just because the band in question might in fact never return, not today and not in a thousand years. I’m talking about Sulphur Springs, Texas progressive rock/alternative metal group Fair to Midland, of course. Their third full-length Fables From a Mayfly: What I Tell You Three Times Is True is still dear to the hearts of many among our team, and so I’ve gathered a team consisting of PR/social media manager Inter, editors Tyler and David, and staff writer Billie to hopefully give it its due credit. Let’s do this!

There are few albums I’ve listened to in my life that immediately hit me the way this one did. I still remember as if it were yesterday (hard to imagine that it’s been eleven years) being in my friend’s basement as he tells me that I have to hear this ‘new’ band. It only took seconds for Darroh’s vocals and the cohesive layering of the sharp guitar tones and bouncy drums to take me aback. Song after song, once and again, I was hooked.

I’ll spare the divulgence into specific songs, as for me at least, it was the elements of the overly long and difficultly titled record that hooked me. The aforementioned vocals are easily the most defining feature, but I often find myself patting away to the simple, adventurous drum patterns and bobbing my head to the beat. When you get right to it, the music is pretty simple. It’s the inventive phrasing and great song writing that make it something more. Rarely is music this…full-sounding. These lyrics are some of the most fun to sing along with, simply for how ridiculous they often sound on the surface (and how silly it sounds trying to mimic those high notes). Composed of nearly all metaphors, there are some really cool and interesting concepts explored. Pretentious? Not quite, given the presentation and audience. More artsy than anything.

And how could I forget those interludes! Near-circus music to pad between some of the songs, they never fail to get a laugh out of me. I wouldn’t know that Serj Tankian was the one who picked this group up and produced the album, or that most of these songs were previously released in their earlier inter.funda.stifle release, but that didn’t change the face that it was an instant favourite. Music that I could listen to lift my mood, to share with friends, to get lost in. One of my favourite concert experiences was talking with some of the members in a little club in Toronto shortly after their bus crash nearly a decade back.

Reflecting on this record only makes the sting of their disbandment fresh as an open wound. It may have not been the complete package in the way Fables was, but Arrows and Anchors was still a good time, and any new music in this vein would be a treat. For those who know this record, give their actual first record a listen to – The Carbon Copy Silver Lining – you might be surprised at what you hear. For those who haven’t checked this out, do it. There are a fine few who I could imagine not enjoying it at least a bit.

Fables From a Mayfly is an album that I feel was ahead of its time and never got the love it should have because of that. It truly is a masterful rock album, yet you almost never hear mention of Fair to Midland. Even at the height of their success, when you could find “Dance Of The Manatee” on certain radio playlists, it wasn’t a household name in rock music. While I can’t say for certain while that is, what I can say is that this album still holds up the better half of a decade later.

Fables From a Mayfly is a really progressive album for what I would generally classify as alternative rock. When so many of the heavy hitters in rock were laying out record after record with little to nothing new to offer, Fair to Midland pushed to a higher point than many of their colleagues. The sound they ran with was similar enough to a lot of their peers in plenty of ways; there were moments where you wouldn’t think to put them in a different category than a band like Three Days Grace. Downtuned power chords echo out over some soaring arena rock vocals in moments, when shortly after keyboard and bass take center stage and they go off in a completely different tangent than you’d expect from a similar band.

As great as that is, to see a band do something unique like that, I feel it is also part of what could have been their downfall. When you sit somewhere on the fringe of mainstream like they did, it can have a weird effect. You may have the people who refuse to check into anything mainstream completely overlook you, and a lot of mainstream fans may also not vibe with such an experimental sound all that well. Whatever it was, Fair to Midland separated in 2013 rather quietly without making much more than a splash in the water after four albums. Fables From a Mayfly is still a great album to go back to if you want some great alternative rock without boring yourself too much.

These are the saddest stories in the music world: artists with an impressive catalog, a very special sound, and that certain something, which never lived up to their potential in the reception of the people. One such band that comes to my mind instantly is Fair to Midland, the unsung prog heroes from Texas. A so called ‘connoisseur’s band’, they are praised by few, but unnoticed by many.

Fables From a Mayfly: What I Tell You Three Times Is True is the band’s third album, and it showed them on their peak. Fantastical and epic, the band draws reminiscences from acts like A Perfect Circle and Pain of Salvation, while adding some Americana influences to their mix, especially folk and country. What really makes Fair to Midland, though, are Darroh Sudderth’s one of a kind vocal performance and their strong sense of narrative. They manage to tell captivating stories not only with Sudderth’s lyrics, but also with their cleverly paced arrangments and meaningful motifs.

As stated in my first paragraph, their relative obscurity really, really bugs me. Fair to Midland are a very rewarding and unique band, and while many people in the prog scene might know their name, not enough of them really checked out their entire discography. If you wanna change that, Fables From a Mayfly is a great starting point into this fantastic and colorful world. You won’t regret it!

Being a newcomer to Fair to Midland, I didn’t know what to expect. Seeing the cover of their third album Fables From a Mayfly: What I Tell You Three Times Is True, my mind was thinking folk rock of some sort, but nope! Full-blown progressive rock with a nice edge that keeps it chugging along for multiple listens. This album is the kind of excellence you look back on and regret not being a fan of sooner.

The Texas group has the deft ability of peppering in a couple different styles into their brand of grounded progressive rock. You can hear the oft-misunderstood might of hard rock (most tracks, though especially “A Seafarer’s Knot”); even rarer is a drizzle of country music twang to their tone (“April Fools and Eggmen”). The use of piano may seem overwrought in prog rock and okay, it is, but the way it’s implemented by the quintet here provides the tracks with some welcome whimsy.

Darroh Sudderth’s vocals are something else. Lots of range, but slight tweaks in cadence and pitch make them so interesting to follow along. One line sounds akin to Tracy Chapman, the next like a gruff metal singer, and much more in between (seriously, listen to “Dance of the Manatee”). His lyrics weave poetic and epic tales that forego the levels of abstraction and fantasy that a lot of prog rock gets caught up in.

All of these elements concoct a sound that dances back and forth from punchy and fast-paced bangers to slower, more emotional and atmospheric endeavors. Each angle sounds natural for Fair to Midland, like a band who’s confident in their sound. It’s easy to see why this album is worthy of reflection and praise: it’s full of finely-crafted and produced music with barbs to snag into a listener and keep them engaged for some time.

This is an album that I feel like I truly missed out on. Of course nowadays, you can listen to almost anything you want on demand, especially with the advent of the Internet, but being able to listen to an album in the context and when it’s released is priceless. Regardless, Fables From a Mayfly is very good, and that’s the third time I’ve told you, so you know it’s true.

Well, that’s it for now, or rather for 2018! Hopefully this episode of A Scene In Retrospect gave you one last sweet fix of nostalgia before the year is finally done with – it sure did for us! Anyway, what are your thoughts on this band and album? Are there any records you’d like to see included in ths feature in 2019? Leave it all in the comments!

I’d like to use this space to thanks you for keeping up with our continuous trip down memory lane this year, and to wish you a merry Christmas, happy holidays, and an awesome 2019 in advance. Make sure to tune back in fourteen days from now when we take a look at another classic record. Until then, stay safe out there, and as always… 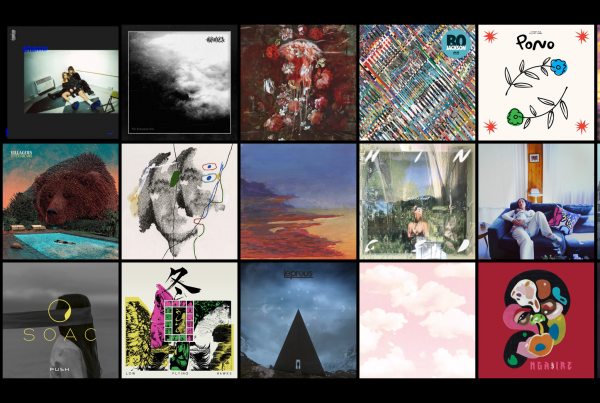 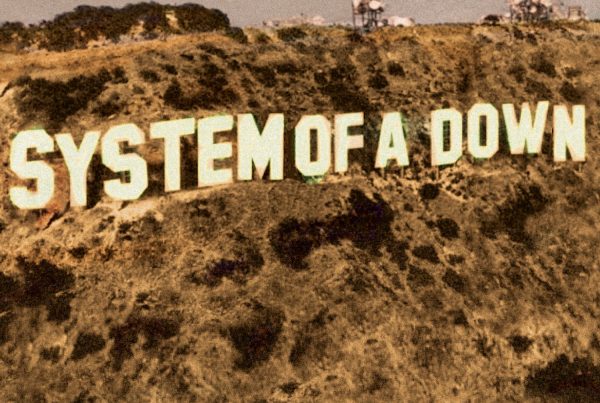 A SCENE IN RETROSPECT: System of a Down – “Toxicity” 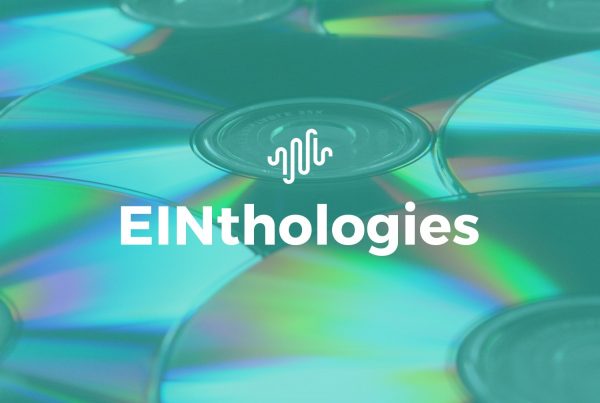