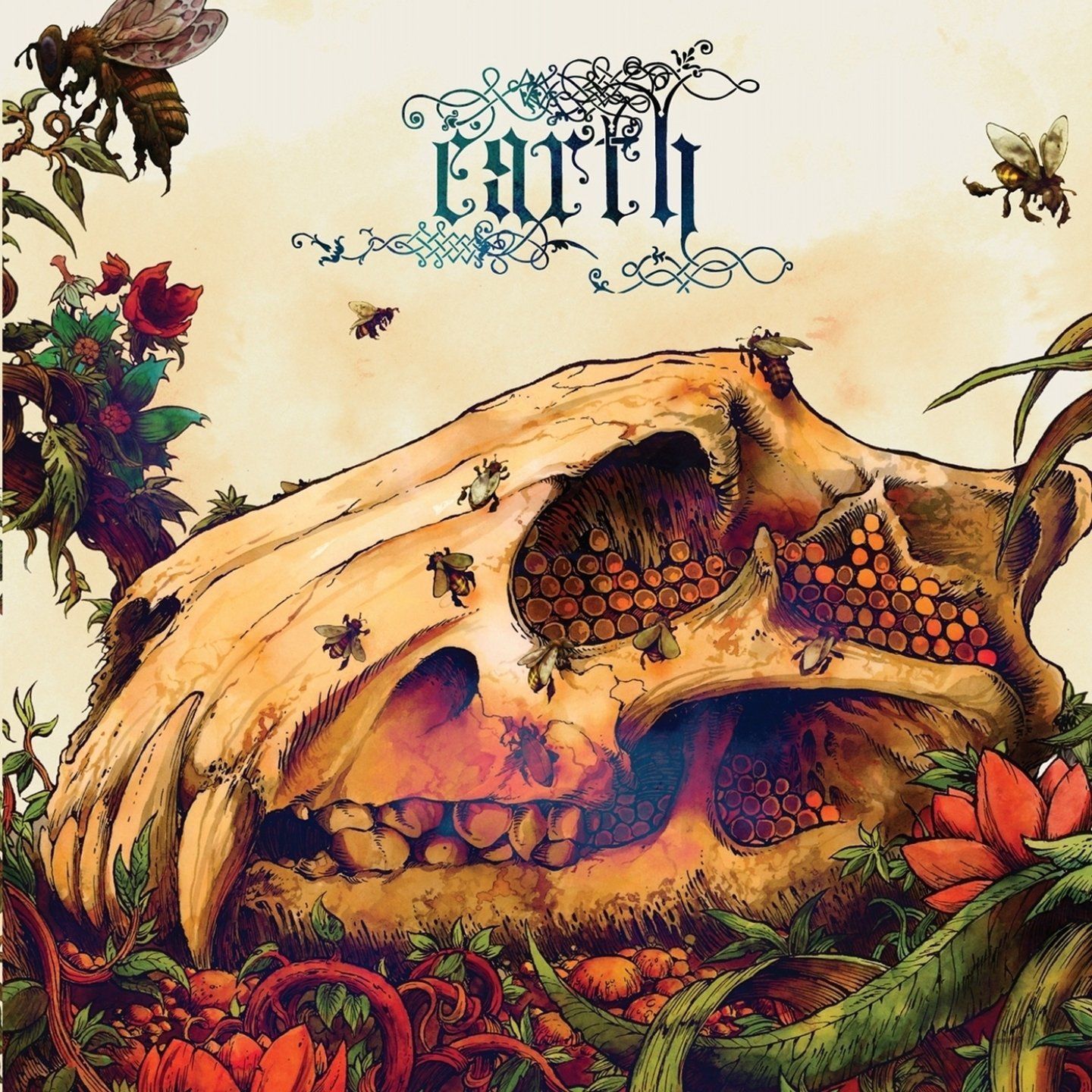 A SCENE IN RETROSPECT: Earth – “The Bees Made Honey In The Lion’s Skull”

By Dominik BöhmerSeptember 14, 2019 No Comments

I will be painfully upfront with you here: Earth‘s The Bees Made Honey In The Lion’s Skull is one of my personal favorite records of all time. From the artwork right to the music, it has left a profound impact on me as a music listener and as a person. That’s why I’m so delighted to finally present to you an episode of A Scene In Retrospect entirely dedicated to it.

Don’t take my word alone for it being an amazing album, though; below, you can find what EIN editor Jake, as well as staff writers Ashley and Shaun have to say about what I consider to be Earth‘s defining masterpiece.

In terms of instrumental rock, the nicety of this record is on another level. With so much room inside the sprawling soundscapes for you to use your imagination, you might be caught between floating across the stars and wandering sun-blasted across a desert landscape. The Bees Made Honey in the Lion’s Skull is the ultimate template for your drifting thoughts, and there is more substance in Earth‘s fifth studio opus than for it to serve as mere background noise. There is, in fact, a whole cosmos to be found. Should you not get lost along its rustic but steady torrents, this is an album you may have fun breaking down track by track. Give it your full attention, and you’ll hear how each song encompasses a different mood, starting with the ominous movements of “Omens and Portents 1: The Driver”, before taking a turn for the triumphant in “Rise to Glory”. If it hasn’t already, the deep hypnosis effect will have fully kicked in by “Miami Morning Coming Down II (Shine)”, and so you are at Earth’s mercy.

The band make no pit-stops during their slow-witted quest to serenade and mesmerise, but these mood changes are what really make it stand out. After becoming lost in the midway progressions of “Engine of Ruin” and acquiring the emotional full-swing of “Omens and Portents II: Carrion Crow”, the dark dream-poppy sounds of “Hung From the Moon” cement the sense of travel listeners have gained on listening to it from start to finish. Title track, “The Bees Made Honey in the Lion’s Skull” serves as the album’s empowering epilogue, by which point, the brain is well-fed and the resulting silence is frankly, dissatisfying.

Patience can make for a heightened experience. In the case of Earth, this is true of both listener and musician. A tempo as slow and steady as theirs can be misrepresented as something placid, but that ain’t the case by a mile. You’ll find the truth in the guitar tones, the keys, the overall musicianship, a mastery of sound which mixes density with simplicity. The Bees Made Honey in the Lion’s Skull is a classic which can’t be bound by time or space. It is just great music, subject to interpretation by each individual. Earth are a wise and progressive band, who clearly take their craft seriously, and as a listener, you are hard pressed not to obtain some of that wisdom along the way.

I must confess that I had never heard this 2008 album before agreeing to jump on board this episode, taking a spot purely on the strength of its fascinating title and artwork alone. Having absorbed it several times now, I’m not sure how I ever overlooked it – let alone for over ten years. It is to my shame that such a standout work has eluded me for so long; now it’s sitting categorically among my favourite instrumental albums of all time, with oozing character and a decidedly relaxed atmosphere.

The opening note of “Omens And Potents 1: The Driver” chimes in a blissfully welcoming distortion. It momentarily rolls over you like silk, the almost comatose rhythm of the drums leading you onward into a cathartic combination of bluesy organ and shimmering tremolo ahead. Moving onward, there’s an underlying whimsy to The Bees Made Honey… that could easily have you ambling through arid wilderness. This is an album that doesn’t dial its punch up beyond three, and never needs to. Its greatest asset is its deceptive weight and uncanny ability to retain your full attention, while also selling itself as perfect background noise fodder.

Soothing and somehow quietly energising, its seven tracks are a laid back collection of minimal sting, although this is far from a criticism. Inversely, the repetitive, comforting nature of its songs are testament to Earth’s ability to craft endearing music that pulls you in. Whether it’s the sudden stop/start moments of “Rise To Glory”, the meandering bass and piano melodies that lead “Engine Of Ruin”, or the jazzy undertones of “Hung From the Moon”: there’s an impressive variety to the musicality of The Bees Made Honey… for such an understated album, released at a time when bigger was often misconstrued as automatically better.

The handful of instrumental elements melt into a sweet, sticky substance, taking their time to progress anywhere. By the point we reach the closing title track, the record bows out gracefully with an uplifting swell that takes you in like the overdue embrace of an old friend.

With a combined runtime of almost an hour, Earth made a record that truly reaches with its seven songs, yet fully delivers without ever feeling like it’s scraping the bottom of the barrel. On this occasion, it really does appear that less is more. As with the old adage ‘slow and steady wins the race’, in taking its time and not rushing to prove a point, this tranquil-paced record has very much won my heart.

Attempting to explain why The Bees Made Honey In The Lion’s Skull is a masterpiece is a daunting task. It’s almost as complex as explaining why Earth is one of the most interesting acts in the drone music space. And yet, here we are. Beginning with the stunning artwork and the verbose-yet-specific title, this record begins setting itself apart before you even unwrap the thing or press play. While the title could be seen to some as the downfall of power or the general idea of ruin, for me it’s a serene celebration of the ‘little’ things. Perseverance, steadiness, persistence – this is what I see and hear.

If you have a keen eye for the somewhat established tropes for album art as it relates to genre, upon first glance you would probably pin The Bees Made Honey In The Lion’s Skull as a blues rock record, with sprinkles of psychedelia. You’d only be kind of right. The strong Western vibe that pervades the sound of Earth took me off guard the first time I heard “Rise To Glory”. The tones, methodical drumming, and of course that legendary vibe all coalesced into a dreamy transcendence that felt almost celebratory. To get such an emotional response from me without lyrics and a fewer beats per minute than I have years on this planet is quite the feat indeed. The magic that courses through those notes is something ethereal.

To me, one of the standout compositions is “Engine Of Ruin”. With the stripped-down intro of mostly piano and sparse drumming, it builds anticipation from the very first note. The major chord resolves that are peppered throughout the song bring moments of catharsis that resonate with the album’s theme and mood. Also, the deliberate, steady pace, mixed with the notions of improvisation from the guitar, are a satisfying mix that really shouldn’t work. This is the story of the album and the band, however. I’m not hugely into lengthy instrumental pieces, but the secret sauce of Earth is drizzled liberally over every note, and I can’t get enough.

There’s a reason that I don’t refer to this album or Earth in general as ‘doom’. Regardless of sonic makeup and their lengthy, lurching compositions, there’s no gloom to be found. There’s a sense of hope and celebration that’s delivered in an unorthodox package. If you’ve yet to imbibe the sweetness of this album, you shouldn’t wait any longer.

That’s all for today! Sadly my schedule was already occupied by other commitments; otherwise I would’ve thoroughly loved to participate in today’s heaping of praise. Either way, thank you for reading this episode of A Scene In Retrospect! You can leave your thoughts on/experiences with Earth and The Bees Made Honey In The Lion’s Skull in the comments if you like, and don’t forget to come back two weeks from now for another belated discussion of a beloved classic!