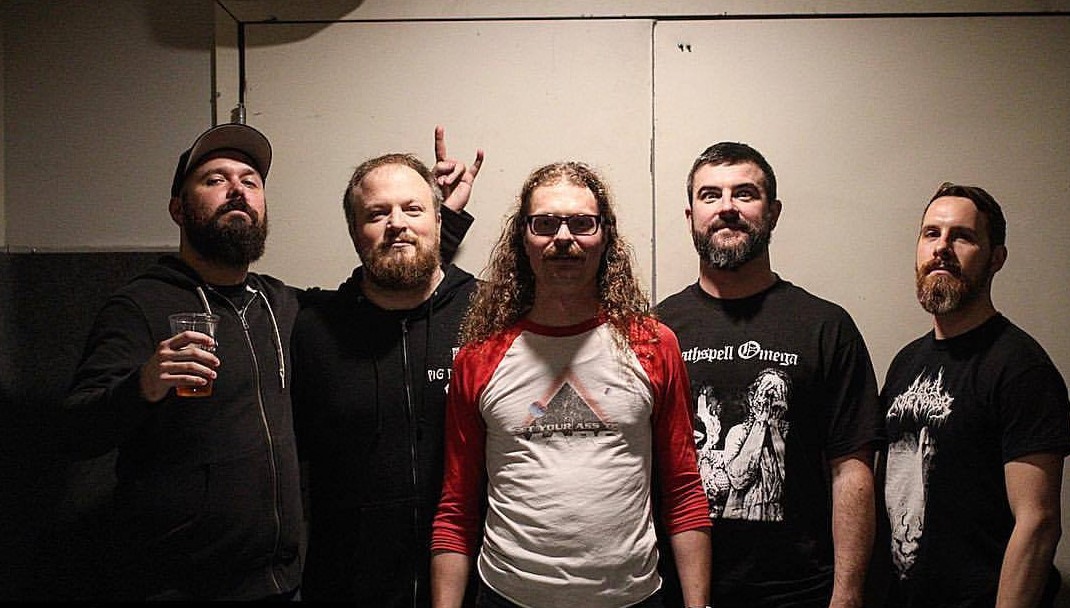 Welcome to another weekly edition of Weekly Featured Artist here at Everything Is Noise! Today your host will be myself and our featured band will be Asthma Castle. These guys recently released their album Mount Crushmore and I thought they needed a bit more attention thrown at them.

Asthma Castle cut through the bullshit and charge right into the heavy riffage, inhalers, and humour with Mount Crushmore. This is an album to throw on when you want something heavy and doesn’t take itself too seriously. Most track titles offer up a bit of wordplay mixed with a tongue in cheek, dare I say, bro-mentality.

These guys hatched in Baltimore, Maryland and now have two releases under their belt. Their first release Jesus, Mary, and Broseph EP dropped 10 years ago. Things went quiet for a bit after this. The group had this to say about the time in between albums.

‘Well, there was a whole lot of nothing for a few years after the EP, which was ended in 2012 when we decided to get the band back together. […] This band is a side project for everyone involved. We have several touring musicians and a pedal builder in our ranks along with children, wives, mortgages, careers, etc. so it took us several years to write and we finally went into the studio in 2015. […] It’s hard to believe it took us 10 damn years, haha!’

Formed as a bit of an amalgamation of other bands, see Pig Destroyer, Misery Index, Integrity, *checks sources again* and yep, too many others to list them all. Do your own research! As stated earlier Asthma Castle came to be as a side project for everyone. Guitarist Justin has this to say about how the band began.

‘I was playing in a fast post-black metal band around that time and as that dissolved, I got interested in slowing it down and going back to my Sabbath/Metallica roots. I came up with the band name after writing one riff and decided to build the sound around the name. Cam and I had been friends for some time, but never had much opportunity to get together and play. We started meeting regularly to have a few beers and riff it up. […] Recruited the amazing Randy Wray on drums, as I had been playing in bands with him for several years by that time and Matt Yukna on vocals. We had a bunch of laughs, Evan Williams, and just enjoyed writing the EP and practicing in the basement of my townhouse! We blasted the hell out of the neighbors, but they were somehow usually cool with it! In that iteration of the band, we never found a bass player that we gelled with and Cam wrote and recorded all the baselines on the spot in the studio.

Having just released Mount Crushmore on March 15 of 2019 the band are looking to get a bit of a tour going. So what can we expect to hear from them during their tour, ie. what do they sound like? Well, this is unabashedly heavy music. There’s no gimmicky atmosphere or filler, it’s straight riff and heft. Don’t let the heaviness sway your opinion of these guys because fun is a huge element of what they are about.

‘We’re just trying to build a little island of good times to get away to occasionally. When we meet up, we do just as much joking as we do music making. All of the song titles come from jokes we kicked around during band practice. We joke with each other on stage. It’s so entrenched in our chemistry at this point, we couldn’t do it any other way. We just get together, get a little inebriated, and let the humor and riffs fly!’

“The Incline of Western Civilization” gets the album going to a great start. The main thing I can take away from this track is DAT BASS THO! There is such an enormous heft to the bass to which the guitars eventually jump in to match. The song is killer and is a pretty good indication of the feel for the rest of the album. Crack open a cold one (or beverage of choice) and enjoy them riffs.

Asthma Castle are in the midst of setting up a small US tour. Be sure to pay attention to that if you want to see them in the near(ish) future. Also, check out their album Mount Crushmore for more humour and riffs!

‘We back up our humor with some serious riffage. It’s tough to find both in one band. The fact that we are a hobby band that takes special care to really craft our music hopefully translates to the audience and they can come join us on our island of good times when they listen to/watch all the hard work we’ve put into Asthma Castle.’

For more content on these guys take a gander at EIN‘s Review Rundown 32 for a quick review of Mount Crushmore. Be sure to check out Mount Crushmore in its entirety in on Bandcamp or Spotify and give them a like and follow over on Facebook.