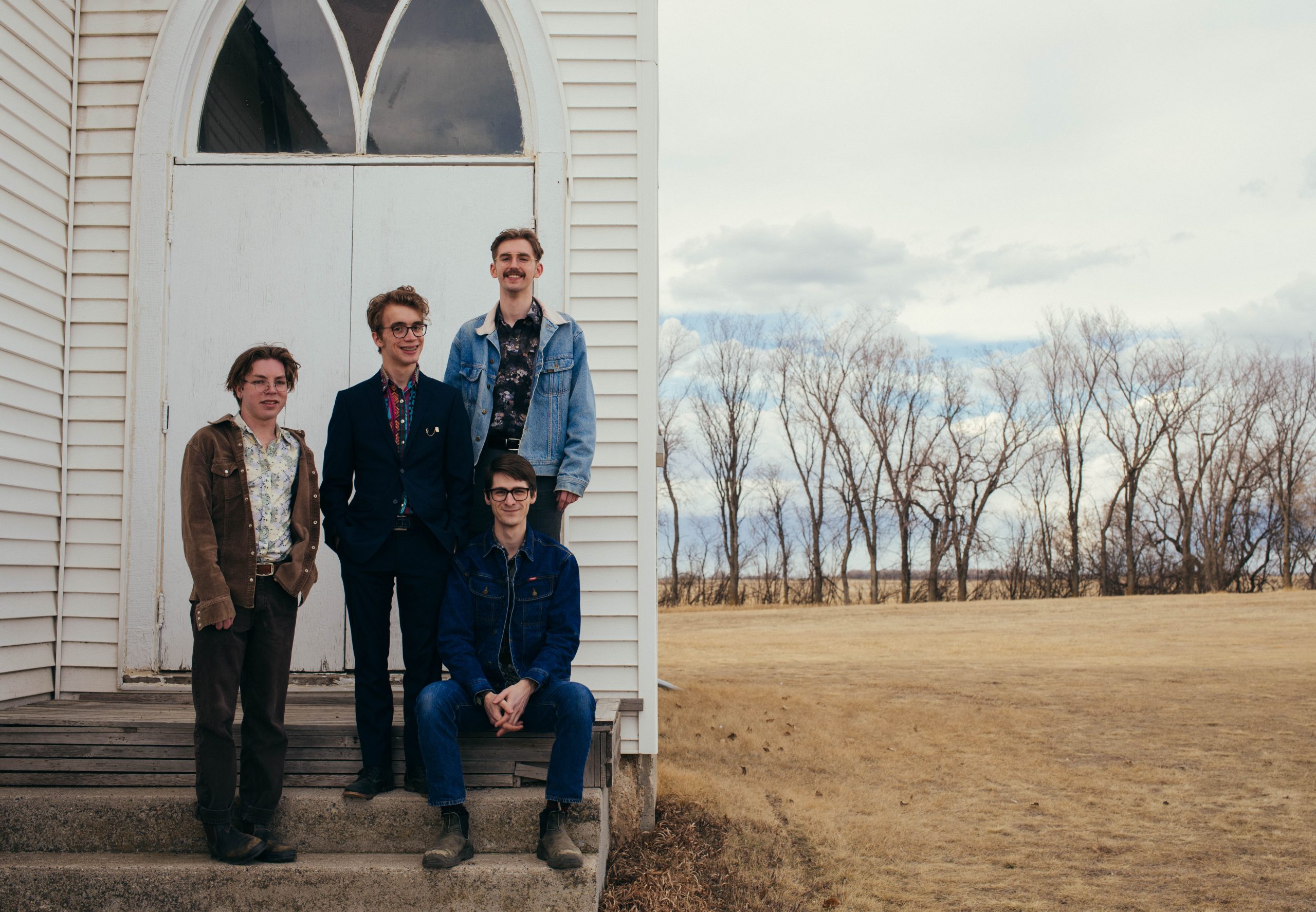 When people think about Saskatchewan, Canada, they often see a small prairie province. The music they associate with this is most likely acoustic sounding folk, bluegrass, and country. I think this is a very wholesome picture filled with warmth and community. Although many artists in Saskatchewan stray far from this sound, The Local Group is one that is keeping it alive, specifically in the younger crowds.

The Local Group is a young bluegrass ensemble from Saskatchewan, Canada, that charms the hearts of everyone they encounter. The quartet includes Ethan Peters on double bass, Elliot Dillabough on acoustic guitar, Jaxon Lalonde on banjo, and Justin Vilchez on mandolin. At times Peters breaks out the fiddle, and Lalonde chimes in with the triangle for a change up in instruments, impressively adding to their sweet folk sound. Originally a trio that met in high school, they were joined by Australian musician Vilchez and his mandolin, creating The Local Group as we know it today.

Ironically enough, their somewhat vague name is unforgettable. Whether they are playing in their hometown as locals or performing out of town on tour, they bring a welcoming presence with them that feels like home to everyone. Curious about their name, I asked them the origin story. They say that it is ‘a reference to the cluster of galaxies that our Milky Way galaxy is in.’ The band originally started performing without a name, but were forced to come up with something when applying for a festival. Last minute, they chose The Local Group, which could not be more fitting for this enchanting group that has become a Saskatoon favourite.

Coming from the small province of Saskatchewan, aside from Vilchez, the band has grown up in the tight-knit prairie music community. Starting their group young has helped them to connect with many other musicians in the area and has opened up many opportunities for them. They state that they have received ‘nothing but support and kindness from everyone else and it’s been a great environment to come up in.’ Banjo player Lalonde has performed with many other bands in the city and double-bassist Peters is studying music in post-secondary, so they are quite immersed in the surrounding music scene. Staying true to their name, the band’s favourite festival takes place in their province, just a few hours away from the city of Saskatoon. Northern Lights Bluegrass and Old Tyme Music Festival takes place at Ness Creek in mid August every year. Playing at the festival for one of their first performances, they have returned every year, making it their second home.

The Local Group is quite young, specifically for the style of music they play. Being in their young twenties allows them to introduce the traditional bluegrass sound to a generation that does not even know what it is. Each of the band members has been immersed in folk music their entire lives, so playing and writing bluegrass tunes comes naturally to the group. Although they have grown up in the folk music scene, they have their difficulties being a younger band in a more traditionally-styled music community.

‘As for being a young band in bluegrass it is predominantly a genre that attracts an older crowd and kind of has an element of strict traditionalism to it […] in some ways that’s nice because we get to introduce people our age to this cool music tradition and get to enjoy the support of the well-established bluegrass community. In other ways, it can be limiting in that we can be written off as a band that plays an old and boring style of music, and on the flip side we sometimes play too ‘progressive’ of music to be called a ‘real’ bluegrass band. That being said we primarily think of ourselves as bluegrass musicians.’

The Local Group puts on captivating performances, including tunes their favourite artists have written as well as originals of their own. They usually stand close together all crowding around a retro looking microphone, giving them a unique performing aesthetic. They do a great job of making people want to dance and have people singing along by the end of shows. Their tune “Greenback Dollar” gets stuck in your head for days and makes you crave the familiar feel of bluegrass music. Influenced by Joe Val and the New England Bluegrass Boys and The Slocan Ramblers, the band strives to create a sound of their own while appealing to long-time bluegrass fans.

‘Generally speaking we also owe some debt to Cletic music and traditional irish (The Dubliners, Andy Irving and Paul Brady), blues, barbershop, classic country, and Appalachian and Canadian old-time fiddle music for inspiring us and giving us material to play. It’s pretty natural for us to listen to and borrow from those genres given our instrumentation, but we’re lovers of all kinds of music and we keep an open mind and an open ear to anything that’s good.’

The band is currently playing smaller shows and has had to adapt to playing as a trio again, for Vilchez is stuck in Australia with travel restrictions in place. They are looking forward to a couple of releases in the near future, one being a collaboration with Saskatoon artist Gunner and Smith and the other being their first album. Once they are able to, they plan on setting out on tour in Canada and playing festivals again. They are eager to get back to playing as a quartet again and are excited to release their new music.

The Local Group is…

You can follow The Local Group on Facebook and Instagram to keep up with upcoming releases. Check out their Bandcamp and official site for music and videos!