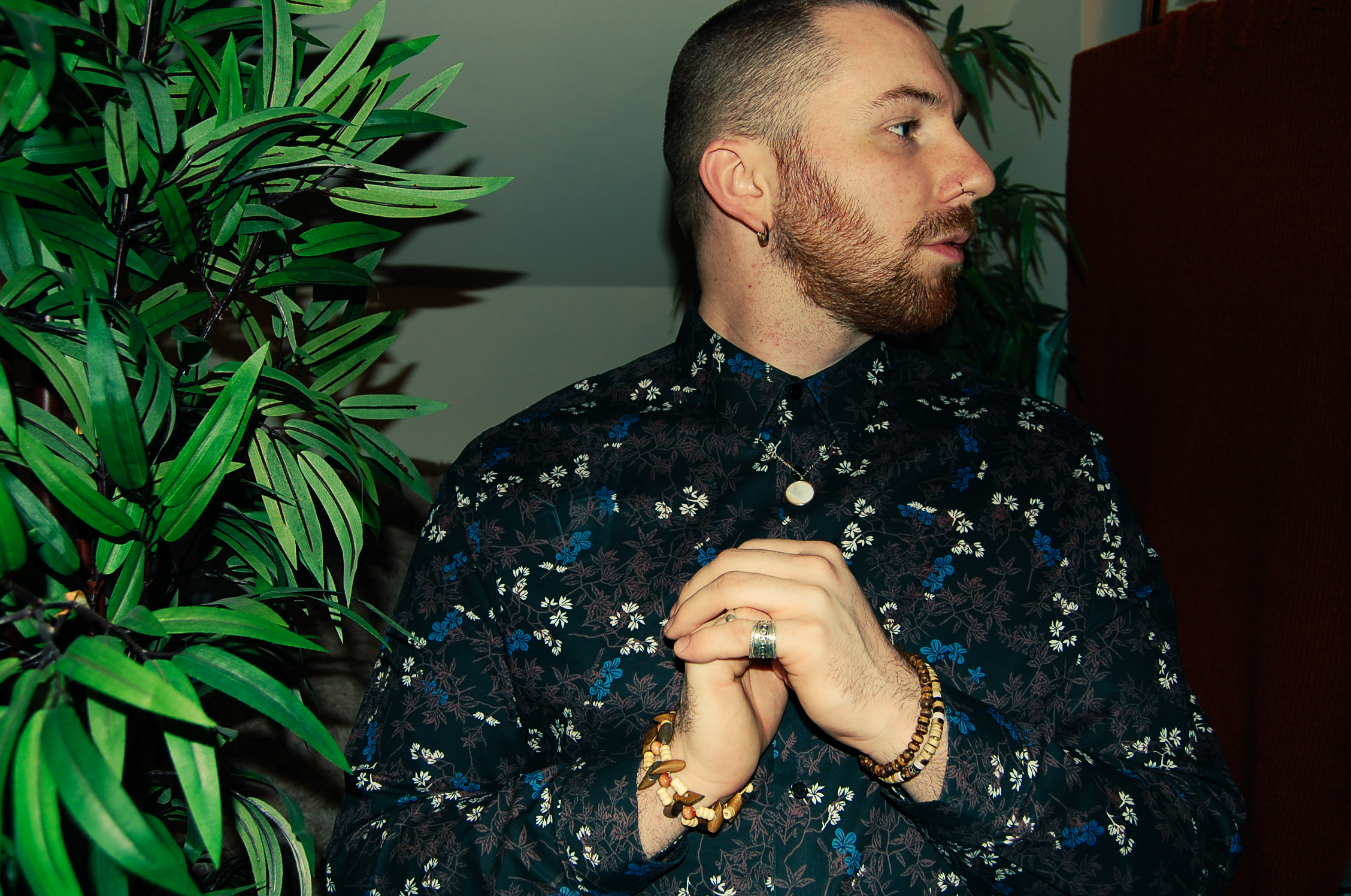 With where I am living, we’re finally out of that ‘are we still going to get snow or not’ pseudo-spring season, at least I hope so… My home state is also doing well on its overall vaccinations and COVID restrictions will be lifting soon, so things are looking hopeful here, for once. Given how mentally and emotionally draining these past 18 months have been on all of us, we owe it to ourselves to relax and enjoy the summer as much as we can, while still being cautious and safe of course. What better way to start that off than with a smooth and relaxing soundtrack to kickstart and celebrate the warm weather? There’s nothing like a drive down the freeway, windows open, and listening to some liberating and peaceful tunes. That is where Naja comes into the picture, this week’s Weekly Featured Artist!

Naja is an artist who is local to me and who I’ve kept up with for the past several years since I discovered them as LOYA. This started off an alternative metal solo project that was akin to Deftones, but with slight djent influence. Despite being very reminiscent of Deftones, LOYA was something that stood entirely on its own and it pulled me in from the start. But as times change, people change too, and the individual behind LOYA slowly shifted from that alt-metal sound to synthpop, and then from there to the soulful, jazzy R&B sound you hear in Naja’s music, which is the focus of this feature here.

Naja is an abbreviation of Nathan Johnson, the mind and soul of the music being discussed here today. Although there was that big shift in sound earlier in their career, the music Nathan puts out is as genuine as their earlier tunes were, even more so now. As LOYA, Nathan put out an EP and two LPs. One of those LPs, Komaglass, ultimately marked their departure away from rock/metal music into electronic-driven dark pop. Here is what Nathan had to say regarding their shift in musical direction:

‘The shift in styles has been a very natural progression for me: when I started writing music and releasing it under the name LOYA, bands like Deftones and Tool were my biggest influences, but the dark, ambient electronic qualities in those bands started to become more interesting to me than the heavy parts, and then my interest started to shift to stuff like Grimes, Purity Ring, and Crosses, things that were much like ‘pop’ music but that drew from a wide sonic palette and employed darkness and mystery throughout their songs. That translated to my last album under LOYA, Komaglass.

These characteristics I described led me to delving into artists like Kanye West and The Weeknd, who were in genres I didn’t know anything about but who were experimental and unconventional in their musical approaches. Then I started to love the R&B aspect of The Weeknd even more than I loved the experimental aspect. From there, I’d sink my teeth into R&B crossovers, to soul, to jazz, and so on.’

As Naja, this is where Nathan took hold of that jazzy R&B style and made it their own. It really felt as if Nathan had finally found a style and sound that they were truly comfortable in. Released in mid-2020, Colors of Your Heart marked the transition to Naja and their new sound, one I’ve been infatuated with ever since. As I listen chronologically to all the music Nathan has released, be it under LOYA or Naja, I’ve come to notice that this musical rebirth is where Nathan really grew into their own musical voice and this music couldn’t be any more authentic because of that.

‘If it wasn’t for The Weeknd though, I wouldn’t be making an album like this. About a year after the first time I really listened to his music,  I just got obsessed with singing all of his songs. And while attempting to do that got me to expand and really hone my vocal abilities, I feel like the biggest takeaway from the last couple years is that I found my OWN voice, in a literal sense: I quit trying to sound like any particular artists and decided to be more in love with what I bring to the table.’

From the moment Colors of Your Heart starts with “Going Blind”, you’re invited in with very vibrant guitar chords that give this funky song a ’70s, psychedelic kinda feel. “Sunflower” makes for an interesting shift in sound, with the Latin-infused beat and the smooth, colorful vocals leading the way to various saxophone and bass-driven passages. As a whole, this album really is a musically colorful piece of work, as the title would suggest. It just feels so warm and comforting, and is 24 minutes of solace, a sublime distraction from a world filled with chaos.

Overall, this first album gives you a glimpse of what to expect from Naja’s music. Following up Colors of Your Heart, we are spoiled with new tunes as the follow-up effort, Sun Covered Diamonds, was just released last week! Although it feels just a tad bit more minimalistic compared to its predecessor, Sun Covered Diamonds is the beautiful, first ray of sunshine after a long, dark winter. This is Naja at their most vulnerable and the music really benefitted because of that.

Sun Covered Diamonds seems to be a little more reserved instrumentally when compared to its predecessor. That isn’t to say that this album is instrumentally lacking, as that couldn’t be less true. The music here allows Nathan’s tranquil vocals to guide the songs while the instrumentals build undeniably lush, supporting soundscapes. The groovy bass and the fluttering piano flourishes sprinkled throughout the album definitely provide plenty of musical zest on an entrée already so rich in flavor. The various saxophone passages are spaced out throughout the album, where they are the most effective and musically powerful, notably on “Grayish Clouds” and “Closer”, featuring a saxophone solo from Grammy award-winning artist, Fabian Hernandez, on the latter track.

“Breath” is incredibly infectious and upbeat with its bouncy bass lines and almost rushed vocal patterns that give this track a sense of urgency that is so refreshing. It is really hard to pick a favorite song or part on Sun Covered Diamonds, as this album is littered with special musical moments. The synth solo that closes out “Grayish Clouds” is definitely one highlight moment for me. The more I listen to this album, the more I feel like this is a modern, revitalizing take on music from the ’70s. The music is just so peaceful and serene that it washes away any troubles and worries I had prior to pressing play on my music player. Sun Covered Diamonds is a warm cup of coffee early on Saturday morning, with how it makes everything just feel better.

Given all the stylistic changes Nathan has gone through so far, I am fully expecting every coming release to be something different. Each new release shows artists reflecting on their current state of mind and where they are at various points in their life. Naja is one such artist, where their music is organically changing as well between each release; it makes the music feel more personal and real that way.

‘I’m always going to change and evolve as a musician: the ways I want to organize sound, the topics I want to talk about or not talk about, the way I choose to sing or not sing. If my experience has shown me one thing it’s that evolution is a part of my musical journey. So while Sun Covered Diamonds is a combination of pop, soul, funk, R&B, and jazz, although elements of that will likely be present on whatever I do next, I can almost guarantee my next release will be different.’

Naja is the musical entity in which Nathan is the most expressive and truly themself. Sun Covered Diamonds is an ambitious yet humble album, one that brings me indescribable serenity with its gorgeous soundscapes and seamless blending of various genres. For those who want a silky smooth album with plenty of pop, indie, R&B, soul, and jazz influences, this will most certainly satisfy that thirst.

Breathe some color back into this bleak, surreal life we’re living in with some wholesome, luscious tunes provided by none other than Naja. Give them a digital thumbs-up and a follow if you’re so inclined on their Facebook and Bandcamp pages!