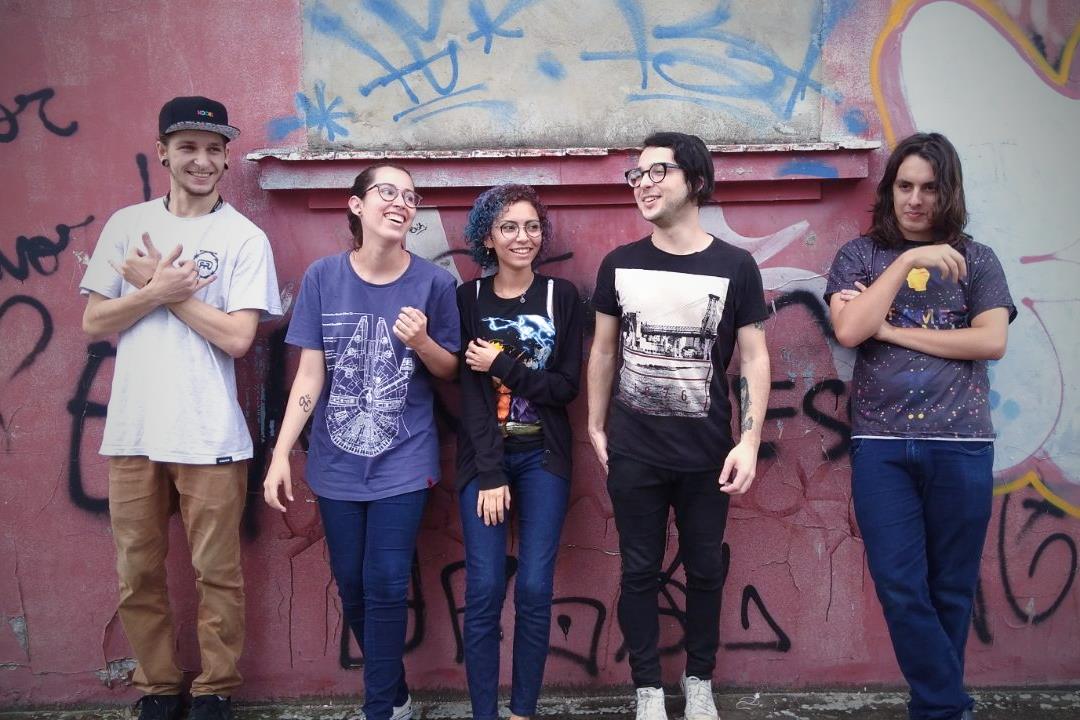 By Faisal BinzagrSeptember 23, 2019 No Comments

It can be comfortably said that the shoegaze genre and its progenitors, derivatives, and cousins have been enjoying a resurgence. Perhaps not explicitly in terms of sales or other markers of mainstream success, but certainly as far as overall presence. The genre’s heyday (arguably the late 80s/early 90s) was represented by a core of well-known bands such as My Bloody Valentine, Cocteau Twins, and The Jesus and Mary Chain who were soon joined by others such as Curve and Slowdive. The scene disintegrated by the mid-90s, but not before cross-pollinating with numerous other genres. The impact of shoegaze can be felt loudly today, from mainstream pop (e.g. Lana Del Rey whose latest album we recently reviewed), to metal (so called ‘blackgaze’ and the like), to surf. The fingers of ‘gaze are everywhere. Other bands straight up label themselves as shoegaze or dream pop (a term once used interchangeably with ‘gaze that has since diverged somewhat) and represent the style with varying degrees of reverence towards the old guard. One such band – self-described as ‘Dream Pop/Shoegaze/Neo-Psych’ – are Brazilian outfit Juna. A little known gem from São Leopoldo, Brazil – currently playing out of Porto Alegre – they’re set to out-psych the scene with their upcoming debut album Primavera Blue, the follow up to 2017’s absurdly brilliant Marina Goes to Moon.

‘Juna is young and made by dream’s noise,‘ the band writes, describing their sound. ‘The music would be a perfect soundtrack for Jean Cocteau‘s movies. Or for Neil Gaiman‘s cartoon Sandman. Juna is simple like perfect details or good things of heart. It’s a sexy kiss in a contemplative affectionate hug. Sonorous and dreamlike, it is precise and beautiful.‘ It’s an unusual, but highly effective description that mirrors the strange and accessible nature of their music.

As it happens, Brazil is fertile ground for unusual musical concoctions, no doubt owing to its melting pot of cultural influences. Multiple articles could be written about its music scene – its history, various movements across numerous genres and time periods, and various key players. It would seem the Brazilian shoegaze scene in particular is thriving, enough to warrant a ‘Famous 5’ playlist by indie music website Noise Artists. Moreover, a blog titled Brazilian Shoegazer is specifically dedicated to the genre. Meanwhile, labels such as the local Brazilian indie labels Crooked Tree Records and Lezma Records provide platforms for psych-leaning artists to distribute their music. It’s from this launch point that Juna introduced themselves in 2017 by way of Marina Goes to Moon.

Recorded during the summer of 2017 in São Leopoldo, the five-track EP was written, mixed, and mastered entirely by Juna at Buraco Negro studio when they were still just a duo comprised of Victoria Appollo and Thomas Almeida (they’ve since had a massive lineup overhaul and expanded their numbers). Marina Goes to Moon is an immersive psychedelic adventure with many layers.

Before the music even kicks in, the listener’s attention is grabbed by the imagery of the cover art. Illustrated by Maria Bitencourt, it’s a stylized reference to the seminal 1902 film Le Voyage Dans La Lune by Georges Méliès. The film (considered one of the first – if not the first – science fiction films ever made) features a plot involving a team of scientists traveling to the Moon, and kidnapping a local lunar alien, before returning to Earth. By evoking the film and its moon mission, Juna frame Marina’s auditory ‘trip’ to the moon and back within the context of a fantastical visual voyage. In doing so, they cloud the EP’s surreal metaphors for drug use with a real-life reference point whose delivery is equally surreal. Marina‘s journey is one of layers within layers… and what a journey it is.

With opening track “Prologue,” shiny bright strumming calls to mind the work of Anton Newcombe. At points, the guitars almost sound like sitars, while dual vocals take turns soaring over dreamy, meticulous production. Possessing both a live quality and hyperreal crispness, with audible bass and lush instrumentals, the duo’s production chops match the quality of song writing.  ‘You don’t even know me until I get high,’ they croon, suitably setting expectations and building narrative context.

“Prologue” is followed by the title track, complementing it nicely with a different spin on ‘gaze. Less Newcombe, less sitar-like, and more classic psychedelic rock. It’s electric guitar driven, featuring a tripped-out solo by Daniel Rosemberg.  ‘As she walks into the room she says to me/someday I will be so far you won’t see me/I don’t want to be yours anymore,‘ Appollo sings longingly. The lyricism is brilliant. I speculate it’s a conversation between Marina and the substances that are consuming her life… told from the perspective of the substances. Equally valid is that it evokes a dysfunctional romantic relationship. Within the framing of Méliès’ film, it could allude to the decision to undertake a physical (or metaphysical) odyssey to somewhere far away. Whatever your take, it’s lyrical minimalism at its finest, working within the EP’s inter-textual framework to create a tangible theme whose precise meaning is elusive without sacrificing immersion.

The album’s centerpiece and arguably most brilliant moment arrives afterwards with “Aniram” (Marina spelled backwards). While still ‘gazey and falling comfortably under the psych umbrella, this nearly eight-minute-long monster takes a sharp tonal turn into darker realms, sounding like a 60s surf nightmare. After a two-minute intro of droopy riffs that evoke a sense of total unravelling, the minimalist lyricism continues with a refrain of ‘wasting time, blow your mind/fallin’ down, hit the ground,’ delivered with slurred brilliance by Appollo. There’s so much this track could represent: a bad trip, the dark side of the moon, the moment in Le Voyage where the aliens emerge from within the Moon. Whatever your interpretation, sonically and lyrically, this is the moment where darker truths are confronted. It’s visceral and climactic, and my favorite track on the EP.

Things conclude with “Drop The Satellites” – the last full-length track – and “Reprise/Two Times” (a two-minute wrap up). Both evoke the lighter psychedelic sounds of the first two tracks, while introducing new elements. “Drop The Satellites” in particular is a refreshing take on their brand of ‘gaze, featuring a more aggressive grunge spin. It’s the perfect track to follow “Aniram” – feeling like renewed hope after a dive into despair. It’s the most confident song on the EP, concluding the journey on a brash (and optimistic) note. “Reprise/Two Times” winds things down with laid-back, stripped-down tones, concluding with the sense that the protagonist is better off than she started, while hinting she may still revert straight back to where she began. Clocking in at just 22 minutes, Marina Goes to Moon is one of the most complete listening experiences I’ve heard this decade, an accomplishment made more impressive by its genius optimization of time, tone, and dynamics.

Following the EP’s release, Juna decided to go indie and eschew record labels. Moreover, Appollo seemingly departed the band, having been replaced by Irina Vitola on vocals, with Marcelo Ajalla and drummer David rounding off the lineup – leaving Almeida the sole remaining original member. Since then they’ve announced the impending arrival of their debut album –  titled Primavera Blue – with the release of its first single “Help Me Cry” back in spring 2018. The single showcased a different spin on their sound, perhaps inevitable considering the lineup shift. Slightly less psychedelic and more alternative, immediately calling to mind the bouncy gothic flair of Doppelgänger-era Curve. Despite the change in vocalist, the delivery and accents remain comfortingly consistent. Speaking about the album on Instagram, Juna promised a personal and autobiographical record, indicating a shift away from the more abstract/narrative driven lyricism of Marina.

While “Help Me Cry” is a catchy track, it does little to preview the overall tone of Primavera Blue. Fortunately, a double-single followed shortly after that summer, further fleshing out Juna’s promising vision, titled “Don’t Be Like Them/Artificial Paradises.”

“Don’t Be Like Them” features their signature twangy guitar style that was all over Marina Goes to Moon, while continuing in the more streamlined alternative rock vein of “Help Me Cry.” It’s a great compromise between accessibility and psychedelia. “Artificial Paradises” on the other hand, is a pleasant left-turn into classic rock. Galloping drums and chugging riffs are overlaid with phased out guitar work that swells and rescinds as the track unfolds. It’s very 80s in tone, with a core that remains true to Juna’s sound and identity. Collectively, Primavera Blue’s three singles suggest a streamlined approach to Juna’s brand of ‘gazey psychedelia… more rock-driven and accessible, without compromising strange effects, walls of sound, or, most importantly, their distinctive tone.

While initially scheduled for spring 2019, Primavera Blue remains unreleased. Having set a precedent with Marina for well-crafted, layered, DIY songcraft, Primavera Blue promises to deliver another immersive listening experience with the potential to catch global attention and recognition. Until then, I will continue to spin Marina Goes to Moon as I collate my personal ‘Albums of the Decade’ list. It’s a worthy edition to any such list, and I can’t emphasize my recommendation to check it out enough. Enjoy the tunes and let them take you away on a lunar voyage. If you’re a fan of shoegaze, dream pop, surf, psych, alternative rock, or grunge, you owe it to yourself.

You can stream/buy all of Juna‘s material released so far on their Bandcamp page. For news and updates (hopefully including an imminent release date for Primavera Blue) be sure to follow Juna on Instagram (their preferred social media outlet). You can also find them on Facebook.