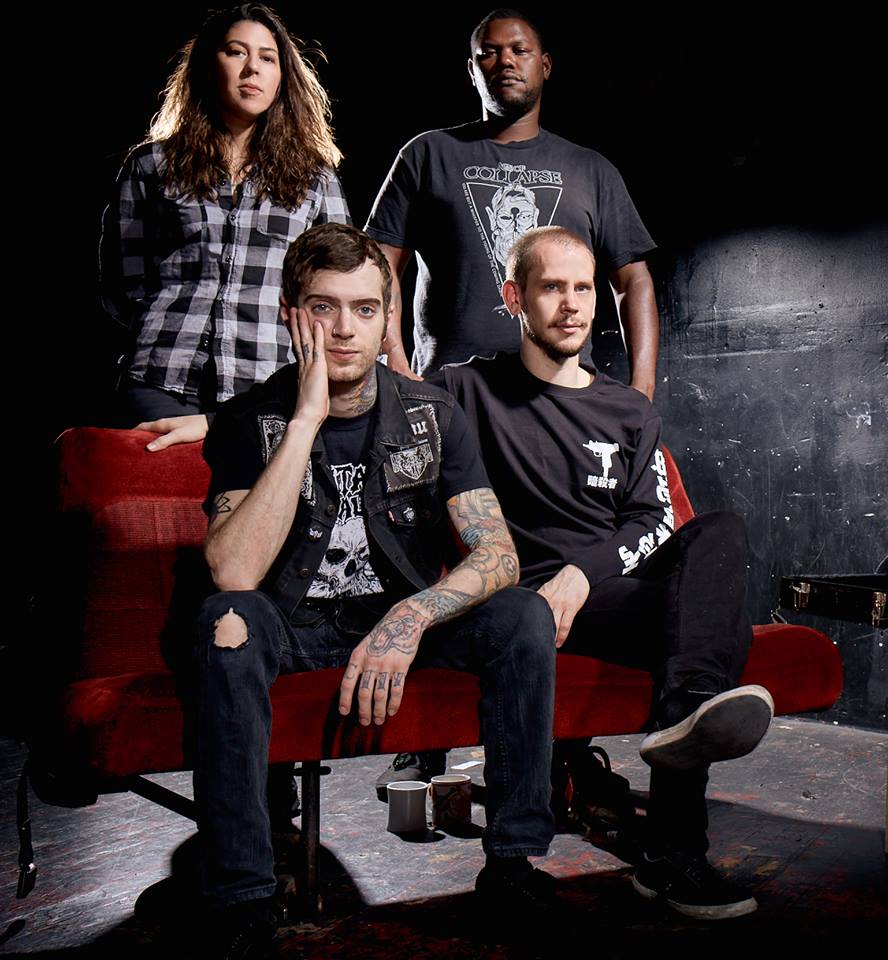 By David RodriguezSeptember 3, 2018 No Comments

Back in February, I came across an LP by a band I’d never heard of. Their name was titillating to say the least: Fucked and Bound. Hardcore from Seattle? Okay! I reviewed their Suffrage album for our Review Rundown feature shortly after it released. I described it as a ‘molotov cocktail through the windshield of your car‘. Ever since, I’ve returned to the record multiple times and never tire of it. Today, I’m very happy to introduce the band as our latest Weekly Featured Artist here on Everything Is Noise. I was privileged enough to get in touch with Lisa Mungo, the mouthpiece for the fiery quartet, to talk about the band’s past, present, and future. And if that name sounds a little familiar to you, well, we’ll get into that.

For the uninitiated, Fucked and Bound is something of a side-project for Mungo and guitarist Brian McClelland, both of whom you may recognize from He Whose Ox is Gored. While that band is a fine amalgamation of the best that heavy music and light, synthetic atmosphere have to offer with a Seattle edge, our WFA is something much more blunt and caustic. This project came together as McClelland was working on material for Ox. ‘Brian had been writing all these great riffs that didn’t quite fit conceptually with Ox. At a certain point the riffs became songs, and he began recruiting people to record‘, Mungo recalls. She remembers saying yes immediately when asked to join, noting ‘I had spent so much time behind a keyboard rig that it felt like a smart move to try something completely different‘.

Material for Fucked and Bound started forming, with Curtis Parker (bass) and Matty Chandler (drums) rounding out the band’s lineup. They played a number of live shows where Lisa had to adjust to her new role as lead singer. ‘It’s interesting because the first few shows, I felt really vulnerable. I mean, nervous is the perfect word to use. Then block party (Capital Hill Seattle, WA) happened. Up until that moment I wasn’t syncing with the lyrics. I was just going through motions. Some switch flipped and it’s been different ever since‘. That’s putting it fairly lightly. Live shows – affectionately referred to as ‘fucks’ by Mungo – consist of a ton of energy and crowd interaction. She jumps in the crowd and mingles, embracing onlookers, sometimes removing an article or two of clothing, all while performing and not missing a beat. ‘It’s important to note, however, that every show is different. I try to be present, so the environment has a lot to do with my interactions. If the energy is crazy then I feed off that. If it’s flat, it could go either way, but [I’m] usually more extreme out of spite‘.

Eventually, the band saw the release of their debut Suffrage on February 18 through Atomic Action Records. The 20-minute record contains 13 tracks of blistering hardcore punk with D-beat touches that slap you in the mouth. Busy, erratic drums lay the groundwork for frenetic guitars and Mungo’s fierce vocals. Lyrical topics range from confronting men prowling at night (“Creeps on the Street”) to tending bar for a bunch of demanding patrons (“#GTFO”). On the latter, Mungo’s scathing inner monologue effectively captures the ethos of an overworked and fed-the-hell-up service worker:

‘Is there anything else
That I can do for you?
As I imagine driving my pen
Into the side of my fucking head‘

I already reviewed it once, so I’ll spare you the details; suffice it to say that the album’s feminist and occasionally ennui-tinged take on the world around makes for a rousing, refreshing listen. The overall tones of both Fucked and Bound and He Whose Ox is Gored are independent and unique respectively. Marching to the beat of your own drum, so to speak. Mungo’s inspiration emulates those feelings well: ‘I am most inspired by people brave enough to carve out their own sound, individuals who stay true to themselves and their work. I guess to dig a little deeper, I am most attracted to authentically fucked up humans who produce genuinely fucked up music’.

This year has seen, and will see, Fucked and Bound play a number of shows locally and nationally. The buzz generated from their stellar record seems to be propelling them to new places and that makes me happy as an fan. Bassist Parker has since stepped down and been replaced by Rah Davis, and it is with this current line-up that they have been working on material for a new album and look toward the future: ‘We have almost 20 new songs and will be heading into the studio in a few weeks to record our second LP.‘ She divulged further, saying the album should utilize more dynamics this time around, but also has a 17-second song on it, showing that they still seem hellbent on staying hardcore to the bone.

As for further down the line, the band doesn’t want to overthink anything. They are in the process of planning a west coast tour for next Spring with some friends of theirs, not to mention the east coast shows coming up very shortly throughout September. All members seem to stay busy, whether related to Fucked and Bound or other endeavors. Lisa, for example, is developing an electronic/drone/harsh noise solo project called FTEU (Fuck The Entire Universe). Her dream collaboration would be to work with Kristin Hayter on something (Lingua Ignota), so this sounds like a perfect match for quite a project. Her and McClelland will also be working on a new Ox LP shortly.

I want to send a big thanks to Lisa Mungo for her time and effort in speaking with me in preparation for this feature. It’s only appropriate I give her the final word: ‘Just a huge shout out to Atomic Action Records for all their support and to all our current fans for your energy and encouragement! Can’t wait for the next fuck!‘

Meet Fucked and Bound at their next ‘fuck’ by following them on Facebook, Instagram, and Twitter. Be sure to support the band by checking out their Bandcamp and look out for new material coming soon!