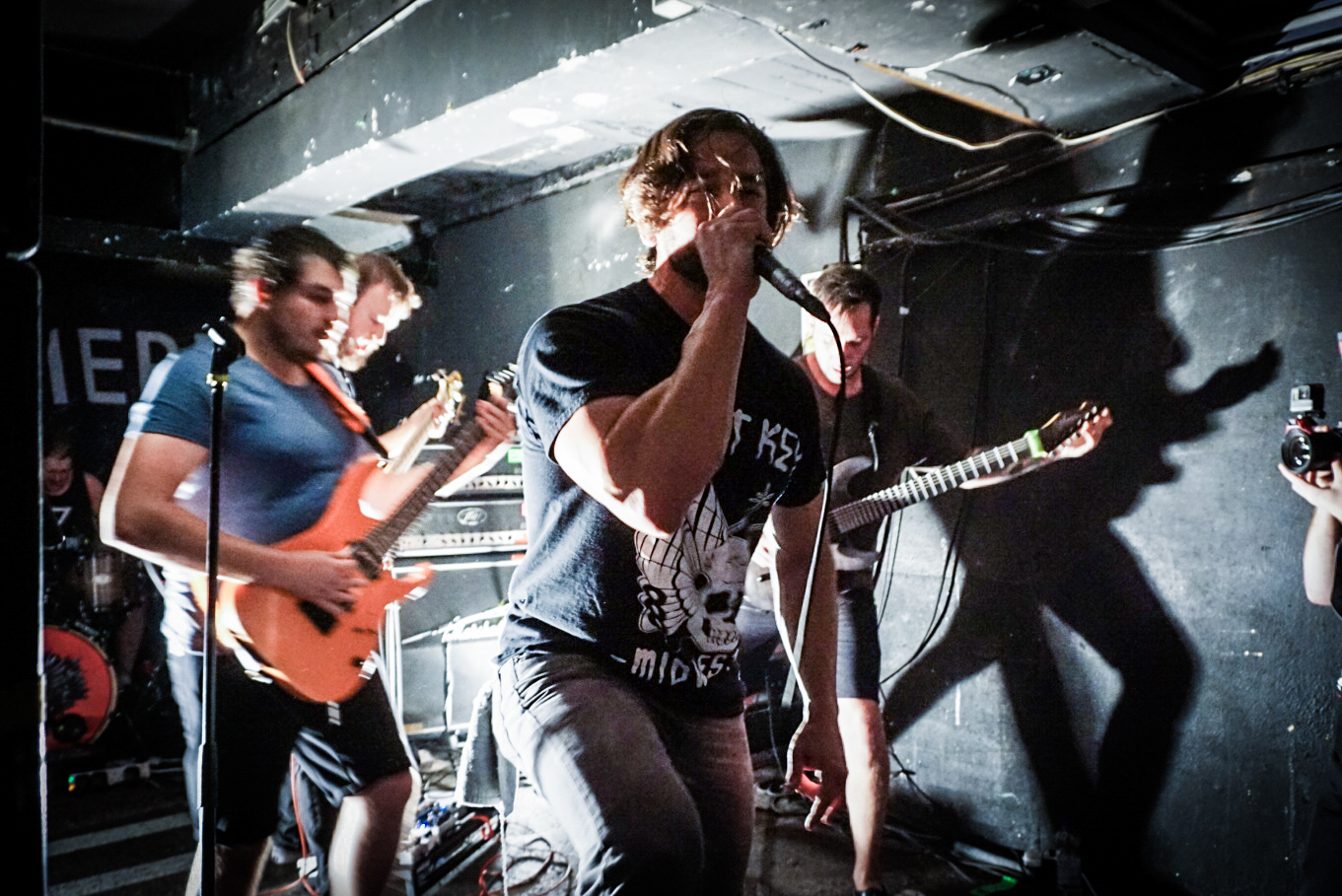 Pedram Valiani Talks Shop About the Future of Frontierer

By Rodney FuchsSeptember 3, 2018 No Comments

Frontierer‘s music is intense, wild, chaotic, heavy, and definitely not for everybody; so are their live shows. A full show of lights that work with the musical background, their performance appears very flashy (and might cause epileptic strikes on affected people). With the release of Orange Mathematics, Frontierer had a huge impact on the metal scene.

Musikbunker in Aachen is a small venue, which inevitably creates an intimate feeling. The people were totally involved in Frontierer‘s show, while the band members had to go off-stage for proper performative moves. Fascinating about the light show is the fact that it was being played live over a midi-keyboard. Their set was a continuous piece of music, and was combined with a lot of loops and guitar effects. Songs like “Bunsen”, “Tumoric” or “Bleak” stood out as highlights; the audience was even treated to an encore in form of “Helium Vat”. The concert that had no supporting band to offer, but it definitely was worth it, if only for getting the rare chance to catch Frontierer. Beside enjoying the mathy tunes and heavy breaks, I took the chance to talk to Pedram Valiani about the band’s career.

Fans of the band might know that alongside Frontiere exists Sectioned, another band of Pedram Valiani, who is the main man behind the writing for both projects, and three of the other Frontierer members. But how does Valiani actually know when a song is for Frontierer and not Sectioned? It depends on the feeling, as he himself explains:

‘Hard to explain but it depends on the feel required and the tools involved in making it. It’s no secret that the whammy pedal is behind a lot of the sounds on Frontierer’s work. Also, often when I’m writing for either band I’ll intentionally write in a style that I feel fits each band rather than just writing a song and assigning it after.‘

Unloved marks the highly anticipated follow-up for Orange Mathematics. Due to the fact that Frontierer‘s vocalist Chad lives in the US, it’s hard for them to play shows. The preparation was made up of intensive rehearsals for a week before the tour. Obviously, this took place without vocals. In the past, the band had one practice with Chad the day before the tour starts. This time this didn’t work out, as Chad had to get to Amsterdam, so they just picked him up right before the show in Groningen.

‘Everyone’s schedules were busy so we had some other rehearsals but they were spaced 2-3 weeks apart.‘

However, the band is an independent outfit that doesn’t gain enough money to live from. This makes it generally hard to tour, as all members have their own careers to take care of. Because of this, they are limited to their holidays for touring. While others fly to the Caribbean, Mediterranean or somewhere entirely else, the guys in Frontierer go on tour to play some shows!

Pedram even hints on more to come in future:

‘We are slowly adapting it and with the response, we have had we are encouraged more and more to push the boat out. Chad has taken a new job which means he gets more holiday time. In the USA people aren’t legally entitled to holiday leave as they are in the EU so that was a limiting factor. If the opportunities presented are great we’ll do our best to make it work.‘

With the release of Unloved, the band decided once more to stay independent. A big reason for this is the financial and creative control that labels get over their artists. In Valiani’s eyes, this would be a huge setback:

‘They haven’t been sensible for us. I’ve personally been quite unimpressed by the lack of professionalism some (not all) labels have approached us with and how naive they think we are. That’s a huge turn-off because if we can’t feel secure and like they know what they’re doing then alarm bells start ringing.‘

There have been cool offers, as Valiani continues, even those that might’ve worked but didn’t pan out at the end of the day. As he states to the labels: ‘It’s time for the big boys to wake up to the realities of being a musician wanting to tour extensively in 2018 if they want to sign committed artists.‘

Speaking about the future, the band definitely see themselves on the road. ‘USA and Canada, but we also really want to go over to Australia, New Zealand and Japan‘, explains Valiani. ‘We’re just riding this wave where it takes us, but we have a rough idea of where we want to go at least geographically speaking.‘ So the chances of catching Frontierer live in the future appear to be good! On a side note, I was told that a third full-length record was already done before Unloved came out. Frontierer‘s not over, and they prove it with their live show.

Make sure to hit like on Frontierer‘s Facebook and visit their Bandcamp! All photos taken and edited by Rodney Fuchs.