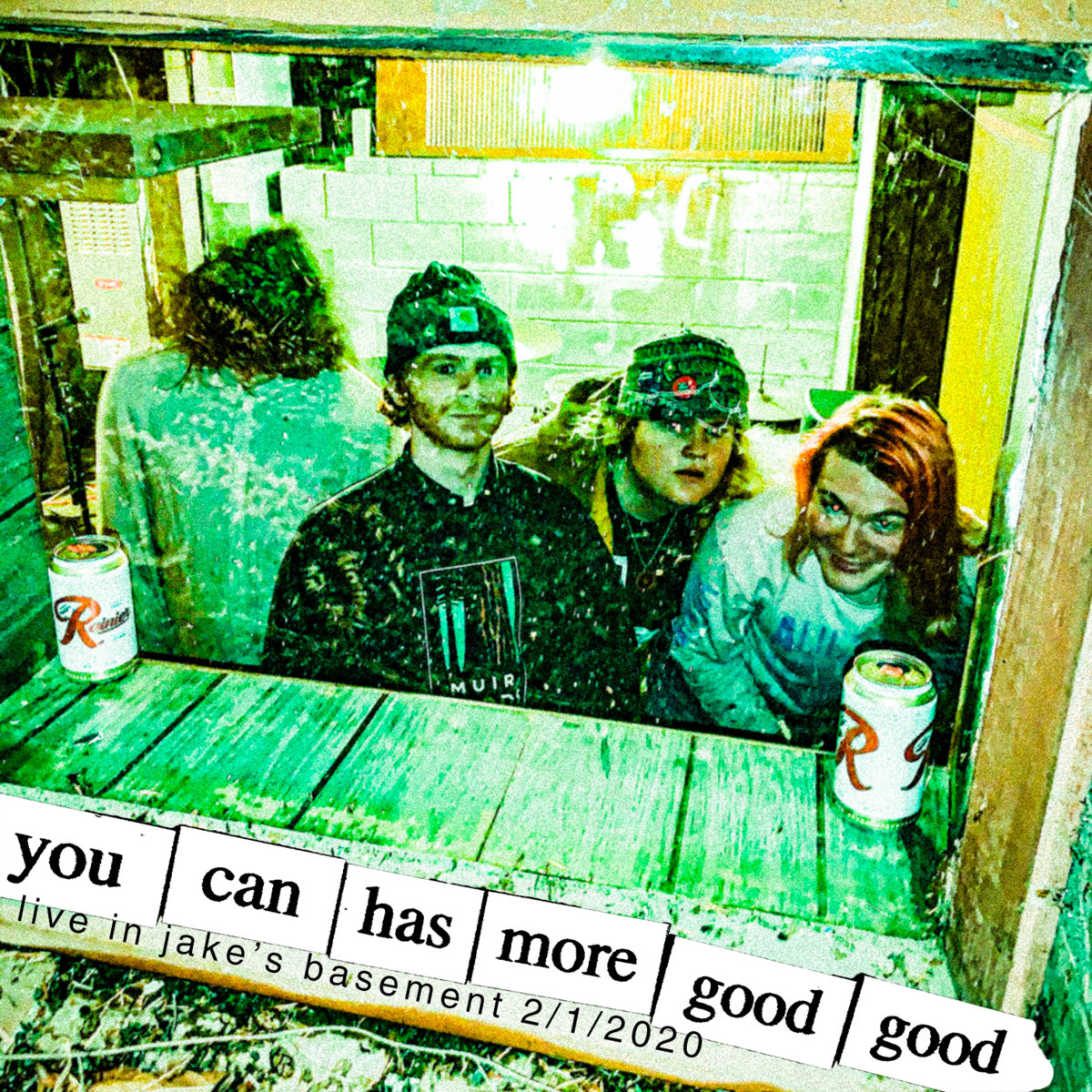 Don’t you just love it when an album seemingly comes out of thin air to take your heart by storm? I know I do! The latest encounter with this all too rare occurrence was when I stumbled across You Can Never Have a Long Enough Head Start by self-described ‘trans ass netrock’ band Floral Tattoo from Seattle, Washington. I’m pretty sure our PR manager/resident music wizard Inter had a hand in this discovery, as it often the case. Their sound, equally rooted in shoegaze, chamber pop, post-rock, and (surprisingly enough) folk punk swept me off my feet. I knew then and there that I had to get them on our Weekly Featured Artist segment, so I recently connected with Floral Tattoo members Alex Anderson and Gwen Power to make it happen.

The band was formed in 2015 by Alex Anderson in their hometown of Kirkland, Washington. After a particularly messy break-up, their newly acquired habit of journaling ‘turned from stream-of-consciousness rambling into songs’. In turn, this lead to a dissatisfaction with the lack of self-expression that was possible in Anderson’s then-main band Darkmysticwoods – they had nowhere to go with their folk punk-inspired ideas, so acoustic solo shows under the name Floral Tattoo became an important outlet. Not too long after they started playing on their own, Anderson moved to Chico, California for a year, which is where they met now-former bassist Nico Pellowski, who would coincidentally move to Seattle a month before Anderson decided to return home. Back in Washington, Floral Tattoo finally turned into the full-fledged band it is today with the addition of Power, whom Anderson had met before moving to Chico, and drummer Christian Taylor.

But how did Floral Tattoo get its name? Anderson revealed that it came from a friend of theirs: ‘Back when the project first started, she was dating my other friend Dakota and the three of us were rather inseparable. She made a collaborative playlist on Spotify for us to listen to whenever we were hanging out so we never had to argue about what to listen to.’ Save for Power, none of the band members have an eponymous floral tattoo, and even they got it only after joining.

Implied in the band’s sound is a plethora of different influences; after all, such an eclectic mixture doesn’t grow from nothing. Upon request, Anderson and Power expressed a shared admiration of folk punks AJJ, while rattling off a sizable list of other, more individual touchstones like The No-No’s, Galaxie 500, Jeff Rosenstock, Slowdive, Nana Grizol, and SEACATS (Anderson), as well as Conor Oberst, My Bloody Valentine, Swirlies, Guided by Voices, The Anniversary, and The Paper Chase (Power).

Everything Is Noise: Your album You Can Never Have a Long Enough Head Start is one of the musical highlights of 2020 so far if you ask me (and others among the EIN team). What was the writing and recording process like?

Alex Anderson: I feel like this album is where we really became a band. Save for one song, the first album was all songs I had been playing solo for years. It almost felt more like a solo act being backed up by a band. Not to say everyone else didn’t contribute because they absolutely did, but this album’s writing process was much more collaborative.

Half of the songs are songs that Gwen wrote and sings. In my opinion – she wrote all the best ones. I can’t speak to when she started writing the stuff of her’s that is on the album, but I wrote “Life in Color” and “Oar House” on the same day in late 2017/early 2018. Other than the few songs on the record that are from years ago that got re-tooled/re-written (“Leaving”, “Don’t Try Things”, and “Danny Be Well”), those were the first things that I wrote for the record.

The recording process started in December 2018 with drum tracking in Christian’s basement/our old practice space. Everything else was recorded in the apartment that Travis and I lived in at the time. We all helped out with engineering, but Travis definitely headed up that process. He essentially taught me everything I know about mic placement, how to run a DAW, etc. We were done with the tracking process by May 2019. Originally, Travis was going to mix the album, but Gwen and I got pretty carried away with overdubs and the mixing process ended up being much more involved than he was prepared for so we got his friend/co-worker Alex Viglino to do the mixing. Gwen and I are both fans of Orchid, and when we found out their guitarist Will Killingsworth does mastering at Dead Air Studios we jumped at the chance.

Gwen Power: There was a pretty sizeable gap between when we finished recording Approaching Bearable and when it actually released, and in that time, we started working on new material and slowly arranging things to our liking. Back then, we had three guitarists and a completely different rhythm section.

As for the album’s lengthy title, there’s no deeper meaning behind it, as Anderson pointed out to me that the phrase was merely chosen because ‘we picked it kind of just because it sounds cool’. It stems from a conversation between them and former bassist Travis Powell, and while Anderson does not remember who exactly uttered it first, they do know that the two of them instantly agreed on it being a good title for an album. So, while there’s no inherent meaning to You Can Never Have a Long Enough Head Start, Anderson believes that ‘meaning can certainly be ascribed to it, and if people find some sort of meaning in it then I don’t wanna ruin that for anyone’.

Their first live bootleg, live 1: you can has more good good (awesome title, by the way), was released in early February. It was recorded at a birthday party that took place at drummer Jake Kelly’s house, and recorded by his roommate. Now, with a live album under their collective belt, I wondered where the band members themselves placed their priorities: on stage or in the studio? Power takes a firm stance in favor of live performances, saying that they ‘consider us a live band primarily. Working in the studio is fun and all, but the majority of time we spend working together as a band is working on performing live.’ Anderson, on the other hand, remains more impartial, admitting that while playing shows is their favorite part of being in Floral Tattoo, the recent in-studio experimentation was also a fun experience they’d like to recreate in the future.

You might’ve guessed this from the ‘trans ass netrock’ genre tag Floral Tattoo placed on themselves, but there are indeed multiple transgender people in the band, with Anderson and Power being two out of three in total. To some, this might be more of a fun fact, but knowing how hard the music scene can be on members of the LGBTQIA+ community, I had to know how their diverse cast affects the band’s everyday life.

EIN: As a band that has multiple transgender members, what has your experience been like? Did it ever affect the way audiences and other bands reacted to you? Does it affect the way you write and perform your music at all?

AA: Personally, I have been really lucky in that I’ve been able to avoid dealing with much bullshit from people about being trans. Sure, I get misgendered every day of my life, but if that is the worst that I have to deal with then I’m doing pretty well relatively speaking. Not to say that violent transphobia isn’t a real thing, it absolutely is, but I’ve been lucky enough for that to have never really been directed at me specifically. We’ve been met with nothing but support from our friends and community in regards to our identities. It probably helps that most of our friends are trans. It affects the way I write and play in the same way that being depressed or being in my early 20s or existing under the horrors of late capitalism does. My music is generally an extension of who I am as a person, everything about me is going to affect it in one way or another.

GP: Worst that’s happened is that I occasionally get misgendered at a show and have to correct someone.

With the current COVID-19 outbreak leaving nobody unaffected, Floral Tattoo had to re-adjust their plans for the time being. Where they originally wanted to play as many local shows as possible and potentially going on tour in the near future, the band now shifted their focus onto demoing new material. On March 20, they played a well-received so-called ‘e-gig’ together with Bitch Fits, Smuggling Croissants, and Pure Mothman, which might also be something they’ll explore further during these trying times. Aside from Floral Tattoo, Power will have a mini-LP out soon under their Alien Days alias, while keyboardist Thomas Carson is gearing up to release an album as Trees & Flowers, having recently released a single called “Horse Girl Triumphs”.

Here’s the part where I’d like to give Anderson and Power a chance to address the EIN readership directly with a personal message. This is what they had to say:

AA: The world is really scary right now, please take care of yourself, your loved ones, and your community as well as you are able to. I hope you like our music and that it is able to offer some sort of distraction/relief/help.

GP: Stay hydrated, give money to those who need it, and stream Union Suit XL by Them Airs.

If what you heard and read above was to your liking, please make sure to check out Floral Tattoo on Bandcamp and give their Facebook page a follow. They are lovely people and awesome musicians, and their work deserves your full attention.