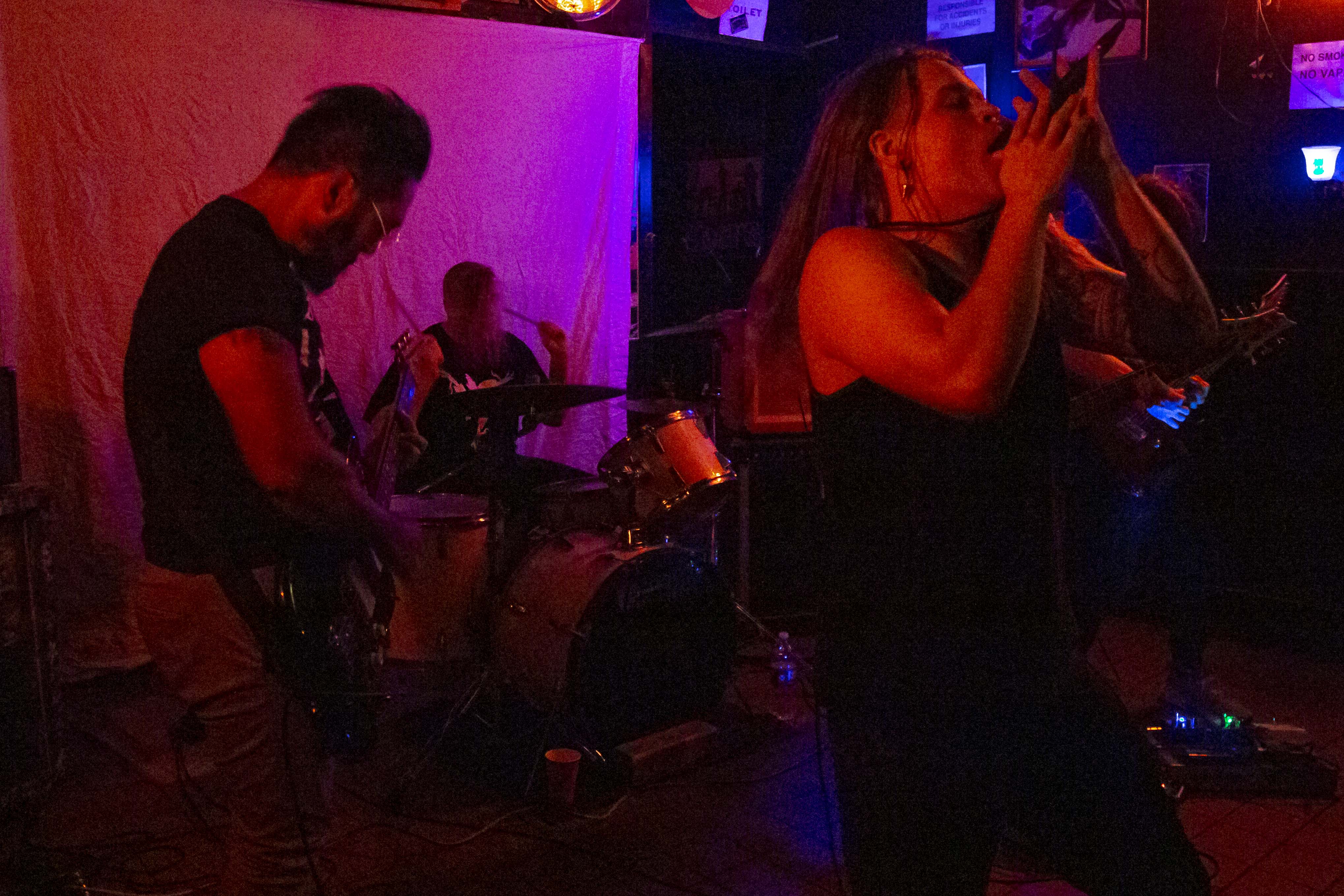 By Ashley JacobNovember 4, 2019 No Comments

Cathari‘s debut album, Corporeality, came out just over a month ago, and I know for a fact that I wasn’t the only one blown away by it. By all accounts, it’s a doom record, but a doom record wrought with melody and sorrow. Is it bleak or is it beautiful? I believe the truth lies somewhere in the between. Its sense of pace, depth of character, and profound level of emotion is nothing short of breathtaking.

My gratitude goes straight out to Cathari vocalist, Mac Stephens for giving Everything Is Noise such a personal account of how this amazing record came to be. Corporeality represents the latter part of a turbulent stage in Mac’s life, which began in a previous band with a much darker story. As he willfully admits, the intention of that band’s music was to act as his suicide note. Fortunately, that did not transpire.

‘Many things went wrong in the process and the small bit of recognition that previous iteration of the band received for the record kept me going. Because of this, Corporeality was composed during a period in which I was lost. Completely lost. If you all but planned to die, choosing to live every day is in and of itself, a great and terrible uncertainty.’

Equal credit goes to the band as whole, for successfully translating these despairing senses into music. Cathari have undergone numerous guises before reaching this point. At one stage, they were even called Gossamer, but had to change their name to avoid confusion with the Ohio goth rock band. After numerous lineup changes, founding members Mac and drummer Sean Clintonov, finally settled into the Cathari we know today.

Drawing influence from bands such as Low, Le Pré Où Je Suis Mort, Kayo Dot, and the chaotic hardcore nuances of early emo, they were able to create Corporeality. As Mac explains, this debut opus reflects grief, or more specifically, the five stages of grief as described by the Küebler-Ross Model. The album’s primary intention is to evoke a sense of unrelenting pain with the listeners, which they can then understand, connect to, and make peace with as they superimpose it over Mac’s own lyrical meditations.

Breaking the structure down into a little more detail, each of the five tracks embodies an individual stage in the Küebler-Ross Model, whereby Cathari apply a specific context to the model’s classic definitions. “Though the Stars Still Fall” discusses ‘denial’, and the dependency of loved ones to fix our pain on our behalf, and the second track, “Drown” covers the tragic irony of self-perpetuating male ‘anger’, as it’s projected towards everything besides the person himself.

The middle track, “Cold Lips” represents the misplaced ‘bargaining’ for personal validation via social media, and “Erase You” talks the about ‘depression‘ and the self-destructive reaction one has in the aftermath caused by the pain inflicted by another person, or their absence. The record closes with “Corporeality”, which quite literally discusses the ‘corporeal reality’ of pain and grief, as well as one’s ultimate ‘acceptance’ of these feelings in their own life.

Keep in mind, however, that Corporeality does not serve as a technical thesis, but more of an evocative journey. It’s also an incredibly patient journey, and exists as such to allow a feeling of reflection in the listener. Mac insists that this would hardly be achievable in a muck of chaos and noise, as opposed to the eloquent stillness and silence that Cathari offers.

‘Would the furious emotional fervor of some tracks have the same effect without a quiet period of reflection to follow? Grief is deeply personal, and I wanted this to be reflected not only in the lyrical content, but the way the music encourages you to process it as well.’

From a technical standpoint, the songwriting began with poems and musical motifs written by Mac, which he then converted to the lyrical content of Corporeality. He would then work in cohorts with guitarist Kevin Nolan, to create the full arrangement as heard on the album. Besides the music, one of the most striking elements of the album are the vocals, the majority of which are sung cleanly. Mac is a baritone singer, and though he is an avid lover of harsh vocals, he chose to growl sparingly as any excess in this department would dilute the message of the record, thus rendering that particular emotional release ineffective.

‘When I am screaming, I want you to feel a fever-pitch of anger that isn’t present in other portions of the recordings. If I were to use harsh vocals throughout, this anger would be emphasized less and less.’

Cathari is all about communication, and for this reason, taking this music to the stage is as equally a personal experience. Under their current name, the band have only played one singular show, but have performed several more times under their previous titles. Mac does not by any means deny that there are challenges in playing such patient, spaced out, and emotional pieces whilst maintaining a sense of energy throughout – particularly during the moments where he remains silent – and it’s down to the band alone to maintain pace. He also proudly states that such challenges have been more or less surmounted.

‘As the vocalist, I am able to engage with the crowd, to touch them, to look into their eyes as I tell them of my own pain. I spend songs pacing up and down the front row, placing hands on shoulders, giving hugs, and allowing people to sing along. I want our shows to be a collective catharsis, not just my own, and if you (the audience) don’t cry with me, I feel somewhat that I have failed.’

With a tour planned for next year, an intended global expansion, and even a hopeful break into film scoring, Cathari are just getting started. The themes for the next record are also already mapped out, this time exploring life in the ongoing climate crisis under globalized capitalism, as well as the resulting despair it imparts unto the youth.

Proving with clear distinction that communication through art is a powerful tool via which the burdens of grief and suffering can be addressed and discussed, Cathari are a musical force that should not be ignored. In harnessing a very real and personal dark place, Corporeality gives listeners the choice of either gaining an understanding of emotions not quite so well explained in other faculties, or relating to those emotions on an equally intuitive level. Either way, the experience is nothing short of full-bodied. Here’s wishing for a strong and prosperous future for the whole band, and big credit once again for the amazing music.

Corporeality is currently available to hear on Cathari‘s Spotify and Bandcamp pages, courtesy of Seeing Red Records. For all other news and info on Cathari, visit their Facebook.