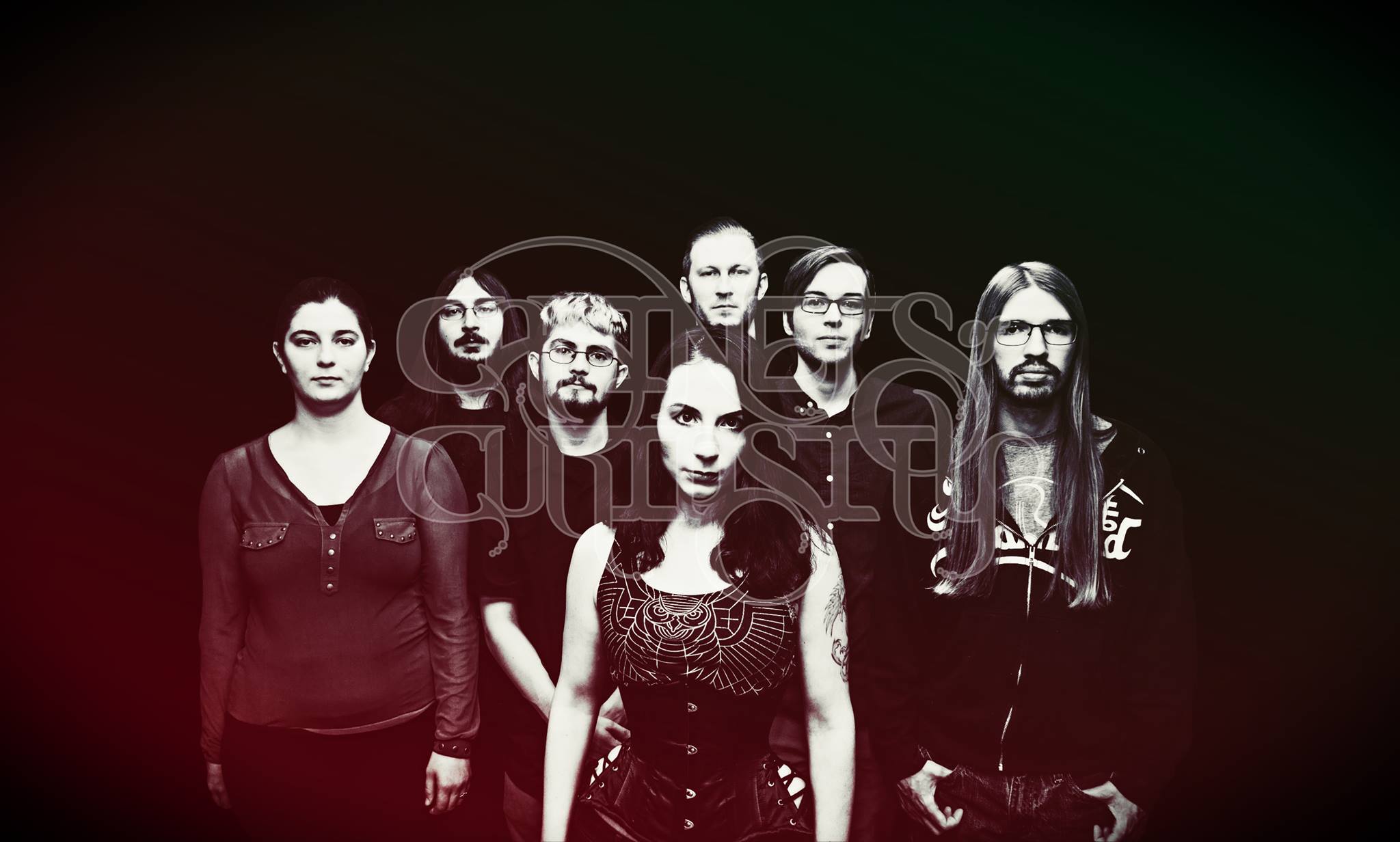 Occasionally, you have a band like Cabinets of Curiosity, who demonstrate that intelligent musicianship strives to break out of convention. Their recent debut album, The Chaos Game is a fun, layered and decidedly epic ensemble, mixing jazz, prog-rock and a touch of outlandish storytelling. It’s a remarkable feat, dutifully performed by seven separate musicians, three of which were kind enough to talk to Everything Is Noise about all things Cabinets of Curiousity. Natalie Hornyak (vocals), Brandon Blackmire (guitars), and James Naprawa (guitars) began by giving testimonies on how the band first came together..

James: ‘I basically just wrote a few songs that were prog rock-ish, and I wanted to hear them played. I had this big vision in mind for the band — keys, brass, woodwinds — I wanted to make something big. I ended up posting an ad on Craigslist, and, well, here we are.’

Brandon: ‘While I only officially joined the band around two years ago, I was around for the formation of Cabinets of Curiosity. Cabinets started as somewhat of a side project (one of many that were started) between myself, James, and Jared when we were in another band called Volt.

‘We all had wanted to explore and experiment with a more progressive sound in the vein of Yes and King Crimson. Back then, it was decided that there would be one guitarist, so I volunteered to be put on keyboards. The three of us had started to look for other members, but I had to step down due for reasons unrelated to the band. Luckily, after the EP, I ended up joining back up.’

Natalie: ‘It’s been a lifelong dream of mine to find a band like Cabinets. I’ve been writing proggy songs on my own for years — both “Timeless Sound” and “Fractometer” were actually songs I wrote as a teenager. I came in after the band was mostly formed, and it was just perfect. Everyone is just so ridiculously talented, yet there aren’t any battling egos. We just all love the music.’

And so The Chaos Game was born, which is the band’s first and hopefully by no means last, feature-length triumph. The album also has a strong fictional narrative, fully crafted by the band’s singer.

Natalie:‘The Chaos Game is based on a novel that I’m writing. To summarize it quickly, it’s about a paralegal named Julia who is called up to The Upper Realm to destroy and recreate the universe. Things go wrong, and she has to head down to the newly created world to save it — by blowing up a mountain.

‘The first half of the story takes place with Julia learning about the Gods and The Upper Realm, and the second half is all about her journey to blow up the mountain. It shifts from this philosophical, almost magic realism sort of thing into this full-blown fantasy adventure. The album hits on all the major story beats. It’s a bit crazy.’

It’s an impressive feat for a band so young in its years to bring out such an outright masterful endeavor. Look into the Cabinets of Curiosity back-catalog and you will find only one previous release, which is 2016’s Eponymous EP.

James: ‘Just about everything from the EP was a learning experience from us. In terms of writing, recording — everything. We are very proud of that release, but The Chaos Game is just such a huge upgrade. Hopefully, we’ll carry that momentum into the next release (and beyond).’

Brandon: ‘I’ve had the pleasure of being in the position to look at all the progress Cabinets has made since Eponymous, both as a fan and as a band member. When the EP was being recorded, I was around to help with some of the process some months prior to rejoining the band. With this in mind, I’d say everything from the planning, songwriting, as well as the actual production of the record was a vast improvement over the EP.’

With such breadth and style across each song, one may think that composition is a tricky endeavor, though it all appears to work out nicely in the long run. Brandon tells us about how some of the meeting-of-the-minds works.

Brandon: ‘It really depends on the song. We are really lucky to have the majority of the band be productive and talented songwriters. This album is an interesting case because it contains such a vast variety of methods in which the songs were written.  A few of them were written by individual people (as is the case of “Fractals” and “Coastlines”, which was written by James, or “Surf”, which was written by Jared).  Some were written as a group, as was the case for “Nowhere Near the Blade” and “The Clockwork Pheasant”, and so on and so forth. When I joined the band, very few of the songs were composed with two guitarists in mind, so I went and wrote all my parts in a way which would fit in with the music.’

And of course, it helps when each member is on a respectful and mutual footing with each other. This group seems to have a natural talent for it, which is remarkable given that there is a whole seven of them.

James: ‘Everyone’s really open to play just about anything. When someone puts a new song into the band Dropbox, it’s usually an exciting occasion. Sometimes we’ll look over and make some changes as a band, but most of the time, the songs remain unchanged from their original versions.’

Brandon: ‘Yeah, we’re all pretty open minded individuals and love to experiment, so generally we are all open to playing or writing whatever comes to mind. There’s never really too much debate on how something should be. Really, we’re all about what works best for that particular song.

‘If there ever was a challenge, it’s that we have such a large amount of ideas and songs that it can be difficult at times to organize them when all seven of us convene.’

Which brings us to the logistics of live shows. As James Naprawa states, the biggest challenge is fitting the whole band on stage.

Brandon: ‘While I’d love to tour with the new material or even tour in general, at this very moment there are unfortunately no plans for a tour. Hopefully we get some gigs together soon because we’d all love to play this music live for our fans.’

Just listen to this album once and you’ll understand why the concept of live shows is so exciting. But it seems that this is not the only thing in store for the band’s future.

James: ‘Our future lies mostly in the studio. We have a lot of material written already that we’re really excited for everyone to hear, and we have unlimited studio access, so it puts us in a really good position to get a lot of music recorded.’

Brandon: ‘Lots of recording! Always expect more music from us because we have such an extensive and diverse catalog of music that we can’t wait for everyone to hear. We also want to get some shows lined up, of course.’

Good job then, that we have The Chaos Game to keep our ears well-fed in the meantime. Finally, James and Brandon bow out with a statement on what music means to them.

James: ‘To me, music is a way to tell a story. I’m not much of a wordsmith or an artist in the drawing/art sense, so for me music is how I express just about anything I want to express.’

Brandon: ‘Music means a couple different things for me. It’s been a part of my life for as long as I can remember. When I really began to explore my passion for music, it started off as (and still happens to be) an avenue for expressing how I felt. I’ve always kind of had trouble with verbally explaining how I felt, but with music it’s really kind of effortless for me to do so.

‘It’s really an excellent form of therapy to me.’