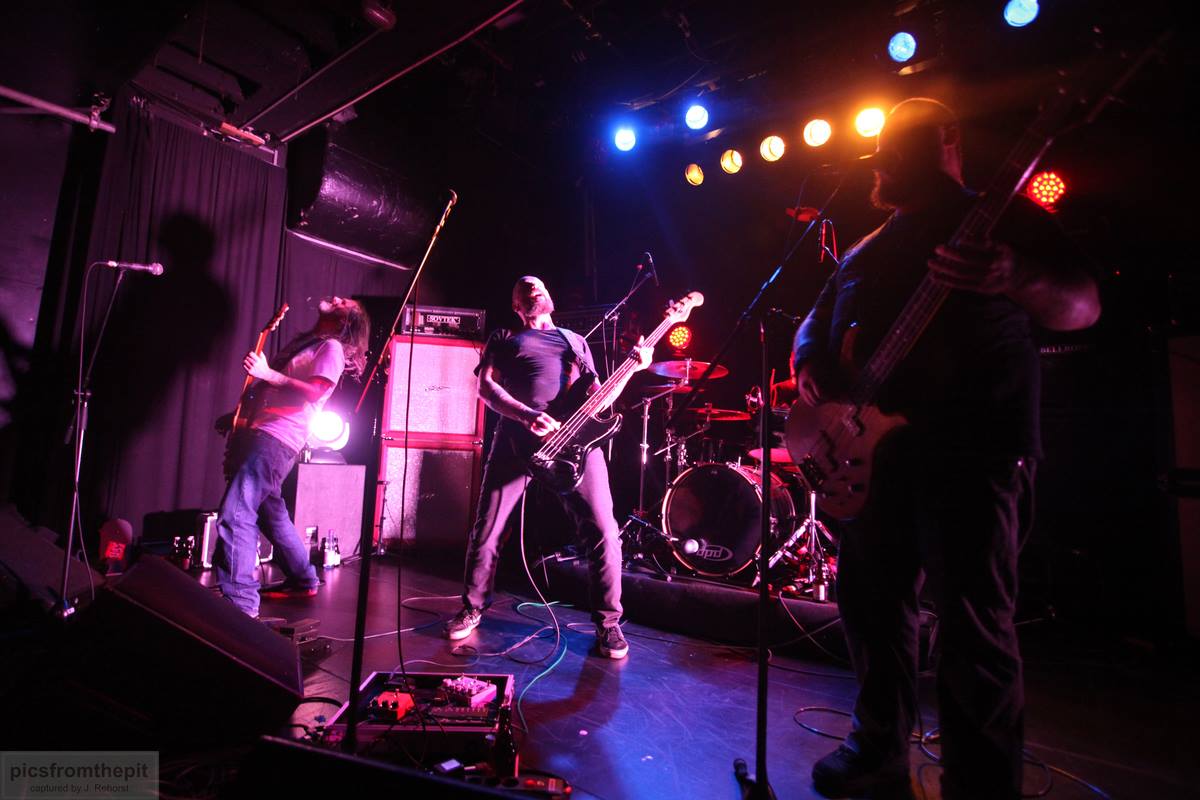 By Ashley JacobFebruary 11, 2019 No Comments

All hail Bellrope! They are a brand new force in sludge/doom who take great pride in abusing the boundaries of noise at every available opportunity. Their debut, You Must Relax is a ravenous opus of bone-crushing riffs, sonic outrage, and a plethora of unruly vocals. Its ironic title and subject matter are an enigma open to each of our personal interpretations. So climb aboard, but give your eardrums a workout beforehand!

This Mannheim, Germany-based outfit have more track experience than one might first think. Bellrope is in fact born from the ashes of doom/drone band Black Shape of Nexus, which disbanded in 2016. All four Bellrope members were previously in this band, meaning they had a mutual sense of enthusiasm for a new project. It is also worth knowing that each member has an equal share of the creative input. Everyone is free to criticize. Everyone is free to be passive.

Malte also went on to tell Everything Is Noise about some of Bellrope‘s influences and creative workings, beginning with what brought him and his band-mates to such a brutal sound in the first place.

‘Books have been filled with thoughts about this. What appeals you to a specific genre? The scene? The attitude? The emotions? The tone? We all grew up with hard music and feel a strong bond with the negativity, the rawness, and the power of this music. Speaking for myself, the most important moments occur when the room is filled with an overwhelming tone: A tone under my control, which I can lose myself in.’

Speaking of which, listeners might be interested to learn that beside drum and guitar, Bellrope is composed of not one, but two bass guitars. But let’s clear that this musical roster makes for a differing style of noise rather than a specifically heavier one.

‘It just happened. There is no specific intention. Having two basses doesn’t make your band heavier. In the beginning it was just an act of stupidity. It was never easier to piss off sound engineers.’

One should also keep in mind that this is by no means a solely instrumental set up. The hellish arrangement of monstrous vocals are another seismic attraction of You Must Relax, and seemingly intuitive too…

‘It happens during the writing process and the rehearsals. We just follow our feeling. My general feeling is that vocals will become less important in the band’s future. Our lyrics never had a message. The vocals are just another instrument that adds a specific mood.’

‘Noise is a very important part of our music, and the challenge is none. If you push your amp far enough, you don’t have any problems producing feedbacks and noise. Add a generic noise pedal, et voila: loud and nasty!’

In doing so, and keeping the sound as carnal as possible, Bellrope pay homage to the numerous forebearers that came before them.

‘We have strong punk, hardcore and noise roots. Our influences can’t be bound to a specific set of genres. We’re gaining our inspiration from many styles. Dub? Sure! Jazz? Bring it on! Eurodance? Well …’

One particularly striking element of You Must Relax is the slight change of pace in the track, “TD200” which is a hard-nosed, quick witted number guaranteed to get the head banging. It sure isn’t Eurodance. Malte gave us some insight on how this track came to pass.

‘”TD200″ was the last song we’d written for You Must Relax. Our first intention was to make this an instrumental track, but something was missing. We asked our dear friends from Treedeon, Yvonne Ducksworth and Arne Heesch, for vocal contributions. Furthermore, our longtime friend Benny from This Brutal World contributed a guitar track. The result was beyond our expectation. We are playing “TD200” live as an instrumental version.’

And as one can imagine, the full force of Bellrope‘s sonic assault can be best appreciated on the live stage, of which these guys are seasoned veterans.

‘The best live experiences are those when you totally forget where you are or when you have the feeling that the whole room is just sound. We had such wonderful moments, several times. You can’t have it always – as all circumstances have to perfectly match. Some of those perfect shows were Stoner Hands of Doom 2008, in Erfurt and Low Frequency Assault 2009, in Nuremberg, both with Black Shape of Nexus. The best so far with Bellrope was Droneburg 2018, in Hamburg.’

‘So far’ being the operative term. So what lies ahead for this unmissable band?

That sounds, as many will agree, like a prosperous existence. You Must Relax will be released February 22, via Exile on Mainstream Records. To hear some snippets in the meantime, check out Bellrope‘s Spotify and Bandcamp pages. For all other news and info, visit their website and Facebook page.