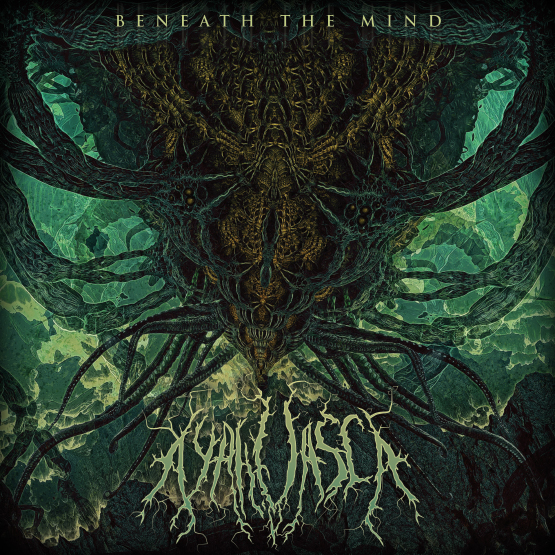 Deep in the underground of metal, a seed has been sprouting, soon to unleash its glorious noise upon us all. On November 9, 2018, Ayahuasca will unleash their debut album Beneath The Mind, a record that offers a rich and trippy death metal experience. Everything Is Noise have been following their progress since Ayahuasca put on some impressive European shows, and released their 2015 EP, Instinct, because quite frankly, their style is so different and unique compared to many bands in this genre. With a crew of eight members, their sound is a force to be reckoned with, and the Cologne-based metalheads have won critical acclaim from their live shows, most recently at Euroblast ’18.

Through a strange series of connections, I was introduced to the band via the French band Mantra, who was hosting Ayahuasca at Festival Les Lunatiques, which was held near Renne in France. The record has been a highlight of my musical rotations recently, complimenting and contrasting to the stoner rock and post-metal I’ve been lavishing in. I’m really excited this week to present to you Ayahuasca as our Weekly Featured Artist, and I hope after you’ve tried out their singles below, that you’ll also be hankering for the ninth to come around sooner.

A name like Ayahuasca sets this band up to be weird and trippy, and the combination of that and death metal is a match made in heaven. We asked the band which came first, the name or the band, and whilst the story wasn’t as wild as we’d hoped, it was crafted from over a decade of the band’s history. Kirill, one of the guitarists, backup vocalists and composer for the band explains:

‘The music was first. Before we were ‘Ayahuasca’ , our core members were playing in the precursor Hate Seven. We were together since 2006, right when we started playing instruments in high school. In 2013 half of the band members left, so we decided to do something different. The music was written first and later, we searched for a fitting name that represented the core aspect of our music… which is to send the listener on a trippy, but brutal journey’.

But how does that relate to death metal?

”Ayahuasca’ is a brew made out of the homonymous plant that is used as traditional spiritual medicine in ceremonies among the indigenous people of the Amazon basin. The consumption of the brew is supposed to bring you spiritual enlightenment and let you experience near-death phenomena.  You will find a lot of contrasts in those psychedelic experiences, and our music refers to that’.

Whilst we were hoping there was going to be an incident with the drug itself that leant the band the name, their music is certainly something that the listener could utilise when taking their own psychoactive adventures, that we are sure of.

With the record out on November 9, we asked Kirill to run through the records history and the recording process.

‘We needed almost 3 years to record, mix and master the record. After we finished recording drums, we actually recorded the guitars and bass pretty quickly. But by then I was very unhappy with the version of “Cult” and “Summoner of Storms” and decided to rewrite the songs because they just weren’t good enough. At that time Pablo joined as our new bass player, and Eddy as our third guitarist. Pablo re-recorded all the bass tracks, and we re-arranged all the guitars to take advantage of the new third guitar. Of course, that took some time and in the meanwhile, I started recording the second record for my other band “Pripjat”. I had the stupid idea to produce two full-length records at the same time. The time management was really hard because I was working full time, had to rehearse with two bands and produce both albums. In the end it took a long time, but we are very, very happy with how it went and how the finished album sounds’.

With all the time that went into the record, and juggling so many plates, we also inquired into what the album meant to the band.

‘To have the album finished is a great relief in itself, but we are really excited about the record and what Ayahuasca became musically. Now we can present ourselves to the world and show our music to the people. Before we became Ayahuasca between 2007 and 2012, we had already composed song to make like 2 albums, but we always threw them away because we were never really pleased with them and nor had this feeling of: ‘Yes! This is our first record.’ Now we do, and are really proud of it!’.

Being a big fan of concept records, I asked if there was one, or a theme to the album.

‘No. All the songs stand for themselves, but we have kind of a music-concept, which is to give no limitations. Sure, you will (probably) never hear some trance-keyboards or something, but we are pretty open-minded. But at the core, we are a death metal band’.

The Structure And The Performance

As Kirill has begun to explain, the band saw numerous changes over the years leading up to 2018. It’s always fascinating to hear about the changes in bands, especially ones with eight members, so we asked for a deeper dive into the changes in the lineup since Instinct.

‘We had some line-up changes. Pablo replaced Nils, our old bass player who was the last remaining part of the core constellation with me and Bobo and was there since the beginning. Timmy joined us on Percussion, and Eddy filled the role of an additional third guitar. As we recorded the Instinct it was more like a demo, because we knew the songs would develop more and we wanted to have them on our debut. We really liked the songs and they earned the right to be on the album’.

To create their brilliantly intrusive blend of death metal, I’d heard Ayahuasca had three percussionists supporting the band. Often you’ll hear, and especially in the first track of their EP Instinct, the band employ the use of tribal drums. I checked in with Kirill about this and the other roles of the band.

‘Almost! Two percussionists (Juls and Timmy) and a drummer (Bobo). In addition, we have three guitarists (Mulfo, Eddy and me), a bassist (Pablo), a lead singer (Sliman), Juls (percussion) and I (guitar) also sing. So, we are 8 people and every one of us originated from a different country, but all live in Cologne. Sliman is from Palestine, Mulfo is Polish, Eddy is Italian, Juls is Madagascan, Pablo and Timmy are both from Chile, Bobo is the only native German and I am from Ukraine’.

Knowing four-piece bands often struggle to sync up live, I tried to wrap my head around exactly how the eight-member band handle the live environment with three drummers and guitarists.

‘No, it’s actually not. We love to play live! Bobo, Timmy, and Jules are playing to a click-track and the rest of the band is trained to listen and orientate to the drums. So we are tight, but still give a natural performance, because only the rhythm section hear the click-track, everyone else follows the drummer’.

Building on that, and knowing what a great response they got at Euroblast ’18, I asked if they had any tours lined up after the release.

‘We are right now in planning of a small tour through Germany and France. But we will also play concerts without any tour-relations. So keep your eyes open, maybe Ayahuasca will come to your town too!’.

Sliman – Vocals
Kirill – Guitars / vocals
Mulfo – Guitars
Eddy – Guitars
Pablo – Bass
Juls – Percussion / vocals
Timmy – Percussion
Bobo – Drummer
We’ll be posting our review of Beneath The Mind in the next few days, so keep your eyes peeled for it! It’s worthwhile getting onto their Facebook for the latest news, and pre-ordering the record on their Bandcamp, too.