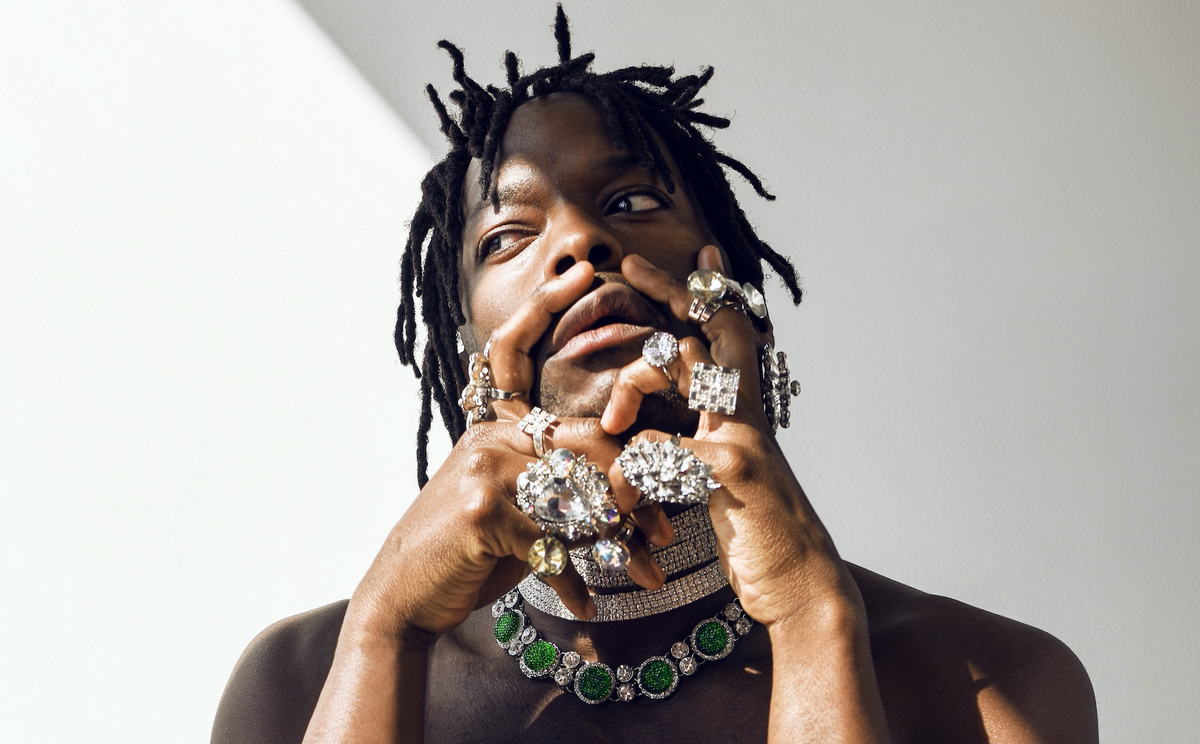 Zebra Katz‘s complex and exciting debut album LESS IS MOOR arrives with an unsettling take on industrial hip hop sure to please fans of both genres.

Part of my process for reviewing LESS IS MOOR – the long-brewing debut album by art house hip-hop musician Zebra Katz – involved catching myself up on who he is, what he’s about, and where he resides in the vast and quickly evolving hip hop soundscape that I’m largely unfamiliar with. In many respects, this process was as enjoyable to me as listening to the album itself, because it encouraged me to step firmly out of my comfort zone. It’s an intertextual piece that is surprisingly far-reaching, covering familiar thematic staples such as lust, romance, hedonism, and opulence vs. minimalism next to other subject matter I’m less personally acquainted with, such as the intersection of black culture and the LGBTQ+ community. It was an eye-opener in many respects, whilst being a thoroughly enjoyable and accessible musical experience.

Despite falling rather comfortably under the industrial hip hop umbrella, LESS IS MOOR immediately distinguishes itself from similar bodies of work in two key ways. Being fairly familiar with industrial hip hop, I was pleasantly taken aback by how uncharacteristically catchy these tracks are. While there are no shortages of the abrasive moments that typify most other comparable projects, there is a distinctive slinkiness here that runs throughout not often found in the genre. The album’s other distinctive quality is just how authentically industrial it sounds. Many rock bands in recent years have been touted as the next Nine Inch Nails, and in virtually all cases I’ve found such acts to be largely undeserving of the accolade, as they simply retread old 90s ground with vaguely political, toothless lyrics. In an interesting twist, LESS IS MOOR feels more like an authentic spiritual successor to what Trent Reznor used to do than what I’ve heard from such bands so far. Not so much in how these tracks actually sound, but in their approach towards uncomfortable thematic introspection, and literal ‘industrial’ sampling that utilizes mechanical noises to create danceable soundscapes – particularly notable on tracks such as “Blush” and “Moor”. Listening to these songs reminds me of what it felt like to listen to NIN’s “Reptile” for the first time, despite the two artists playing within different genres and coming from very different backgrounds.

This isn’t to suggest LESS IS MOOR is one-dimensional. Far from it. While cohesive, the album draws from a variety of dense, dark sounds. The tribal inflections and humid intensity of “SLEEPN” and “BEEN KNOWN” are the sonic equivalents to a jaguar stalking its prey in a rainforest, whereas tracks such as “ZAD DRUMS” and album highlight “LICK IT N SPLIT” explore aggressive rave styles of music (drum’n’bass and hardcore techno, respectively). Despite having a lot going on, it all comes together with a certain minimalist quality to it. The layering is never too dense, and the individual elements are heard clearly and concurrently. Even at its most aggressive, the music never bursts into the same level of chaotic noisy aggression that many industrial hip-hop artists build their attack around. At times this can work against the album, as there are many moments that threaten to explode with rage, only to pull back and deprive us of catharsis that would have made the album ‘pop’ in a complimentary way. As is, the overall effects feels surprisingly understated, and while this may be deliberate, I can’t help but feel a small dose of intense aggression used sparingly here and there would have elevated the album further.

Normally I don’t factor an album’s lyrics in my reviews, unless they are incredibly difficult to ignore (for good or bad). In this case, I’ve made an exception, as Zebra Katz’s voice and words are utilized as the album’s lead instrument, and done so rather effectively. Whether it be how on party anthem “ISH” he delivers a darkly off-kilter call to keep the dance floor moving – in a manner highly reminiscent of Missy Elliot – or the reflective approach he takes to a ‘will they won’t they?’ dalliance on “BLUSH”  (a tad gentler than the ultra menacing music might have you think), the lyrics and delivery are consistently handled in a way that’s catchy, tongue-in-cheek, and suggestive. Delving into the lyrics of the record, and familiarizing myself with Zebra Katz’s vision and reference points that went into its creation, was an enriching journey that exposed me to other artistic and cultural entities I wasn’t aware of before, spanning those who collaborated on the album itself – such as the absolutely brilliant Shygirl – to classic musical icons such as Grace Jones and Little Richard, as well as historic figures such as James Baldwin. For this alone, it was very much worth the ride.

However, LESS IS MOOR is a great album on its own merits, a breath of fresh air, and a genuinely unsettling and catchy listen. You don’t need to be a fan of hip hop to appreciate what’s on offer here. Fans of industrial and rave music will especially find much to enjoy, and the thoughtful, darkly tongue-in-cheek delivery pairs nicely with the music. It’s incredibly cohesive and rich with ideas, and those who’ve followed Zebra Katz for longer than I have, waiting patiently for his debut album to arrive will not be disappointed with the result. Though firmly rooted in hip hop, it feels more authentic to the vision of early industrial music than most industrial music today, and I’m already looking forward to whatever Zebra Katz creates next.