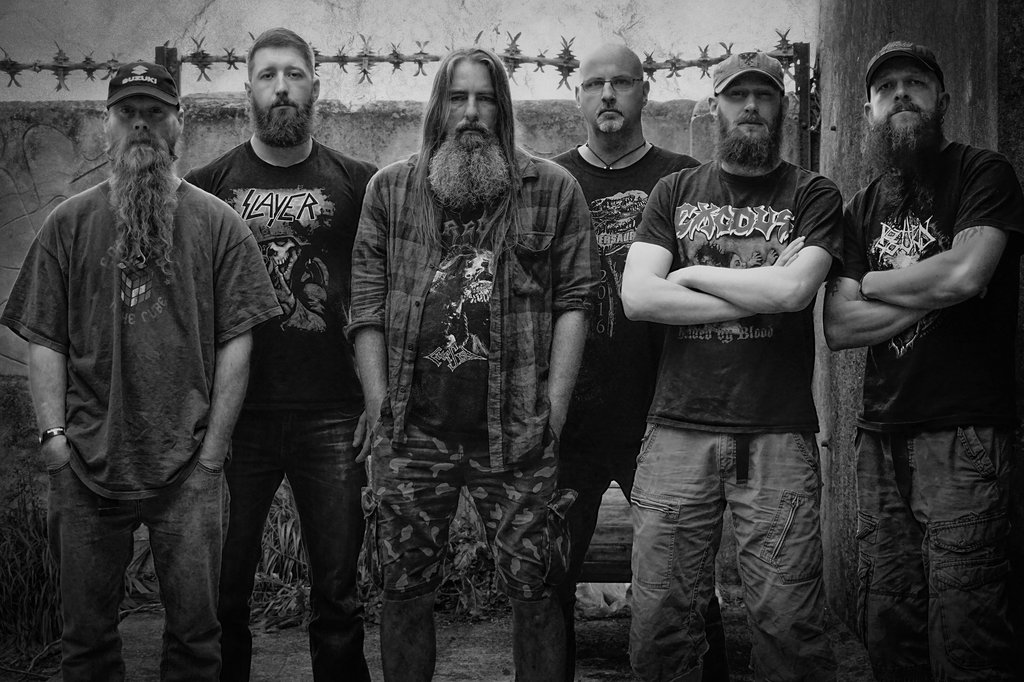 By David RodriguezAugust 24, 2019 No Comments

UK’s Warcrab drudge up some formidable monsters with a nice, weighty sludge-death metal sound that’s just as well felt as it is heard.

Warcrab. War. Crab. What a name, and what a band! Damn, this is heavy. This is some thick, sludgy death metal that has a good amount going for it. Warcrab hail from the UK and honestly, you can tell. If you’re well-versed in the regional sound of extreme metal, you hear familiar guitar tones, the vocals rasp in ways similar to scene legends like Carcass, and more. The band aren’t derivative, they’re simply a product of their environment – an environment bolstered by Warcrab‘s own existence.

Damned in Endless Night is a hell of a crushing crustacean. I’ve been listening to it for a while now and I’m still enjoying the immense groove and weight that it throws around. A big reason why Warcrab are so massive, is because they have three – three – guitarists. Fuck it, right? Sometimes more is more, and it works here. You kind of get a bait-and-switch with the atmospheric intro track “Perpetua”, but from then on, it’s unmitigated muck and snapped sinew.

Single “Halo of Flies” is the first song and it’s a good buildup to the tone we get on the rest of the album. After some melodic teasing, the song settles into an elephantine groove that’s evoked numerous times throughout Damned in Endless Night. My favorite part is without a doubt the absolutely mean riff in the middle of the song. It rides a tsunami wave of groove, and you can hear the abundance of guitar really paying off. Each song has a melodic line or two that just clings to you, not unlike a crab would to you with its claw had you provoked it enough. Some are slow and stoned, some are rapid-fire and chuggy, but they’re all worth writing about. But I won’t write about them all! That would be ridiculous, right?

Anyway, “Blood for the Blood God” invokes Warhammer 40,000 for not only its title, but its general mood. This is a song Khorne would be quite proud of as it’s a maelstrom of hate and catchiness. Each guitar strum is like an axe careening through the air, slicing through before it embeds itself into who or whatever is unlucky enough to occupy space in front of it. During verses, the drums maintain a marching pattern that plays to the warlike approach. “Kraken Arise” crashes on sandy shores of pain with arguably the highest pace and more ferocious instrumentation on the whole album, which is saying something. Just as Warcrab pay fitting tribute to the god of hate with “Blood for the Blood God”, so does this one to the kraken. The chorus chant of ‘kraken arise!‘ is worthy of summoning the aquatic beast itself, so I’d advise against playing this in open seas if you can help it.

Sludge really is just the first cousin of doom metal, so Warcrab will slow things down to make their death metal hit even harder. The best example of this would be “Unfurling Wings of Damnation” – basic song title, but the song’s structure is comparatively lurching and menacing in a way the others aren’t. A doomy, ascending riff cloaks the track with enigmatic darkness all for it to be broken by thrashy rhythms and splashing cymbals near the end. There’s also a ripping solo hellbent on setting the whole plane of existence it inhabits on fire.

I just realized I lied to you – “Unfurling Wings of Damnation” is a great slower jam on Damned in Endless Night, but maybe not the best. I think that honor goes to “Swords”, the next song. “Swords” is resin-dipped in a little stonery feel, the primary riff of the track repeating enough times to pack it firmly in your head much like you’d pack a bowl. The melodies warp around in the middle to keep things interesting, but it maintains its low intensity presentation so the focus is on mood and the vocals, which end the track by repeating the song’s title ad nauseam until everything peters out. It’s all completed with a flashy instrumental track called “Damnati”, probably the best way it could have gone out all things considered.

I really enjoy Warcrab‘s approach to metal. With a focus on groove and heaviness that you can really feel in the mix, they’re something special for those of us that value melody and fun. Three guitarists is much less a gimmick and more of a necessary function to power their sludge-death metal machine. To that, I say good show – I like this album a lot. Damned in Endless Night is the most fun you can have with crab that doesn’t involve a plastic bib and a little wooden mallet.