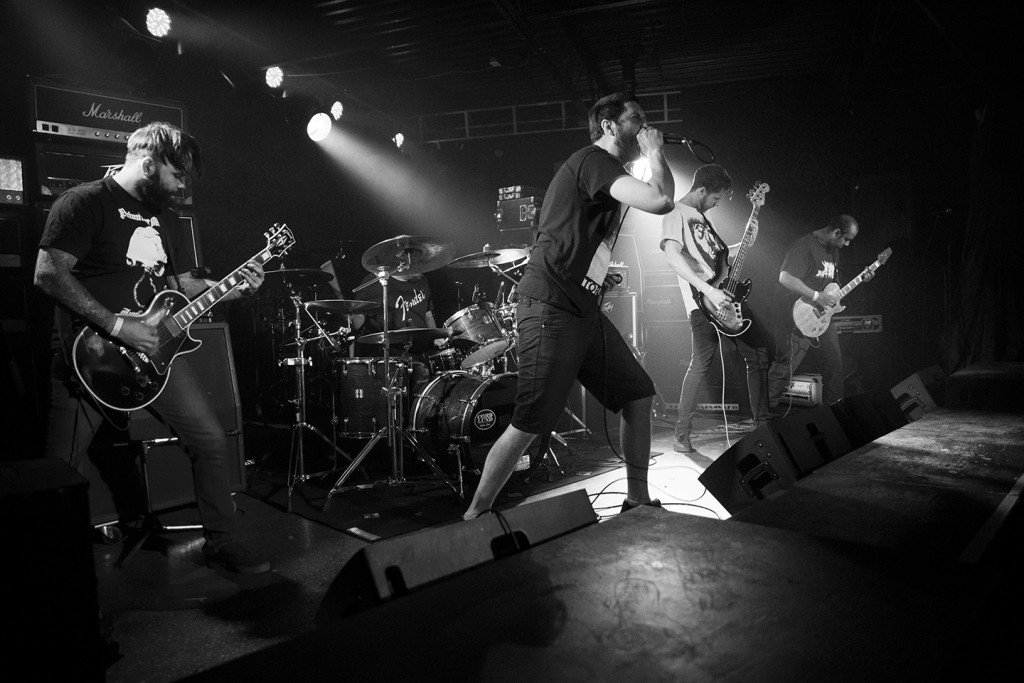 WAKE re-emerge with a sonically blistering and incredibly crafted album that showcases intelligent songwriting and compositional prowess. Devouring Ruin might just be a watershed moment for extreme metal.

Every once and awhile, an album will arrive that pushes not only the band forward, but also the entire genre wherein they reside. WAKE have arrived with Devouring Ruin, a genuine masterclass of metal songwriting, atmosphere, and ferocity. Yes, I’m basically spoiling the album in the first few sentences of this review. I’m not going to try to string you along waiting for a verdict. Hell, you’ve probably already seen the header above and have an idea that I like this album a whole fucking lot. What I am going to tell you about Devouring Ruin is why it’s just so damn good.

WAKE are a Calgary-based metal band that have in the past fallen into a genre crack in the floor between crust and grindcore. It only takes a few moments with Devouring Ruin to see why this categorization fails miserably to fully define what this band is capable of and the far-reaching influences that they wrest into their sonic onslaught. Opening with an atmospheric intro track has long been a pet peeve of mine. Remember back in 2018, when that was literally on every metal record? Well, it seems that my disdain for that practice was not a rarity among fans and critics of metal and most bands have wised to that. What WAKE have done, however, is to serve up the two-minute, “Dissolve and Release” which is more of an apéritif than appetizer. It’s a potent mix of dense, fizzy atmosphere and triple distilled extremity.

Before I jump into reviewing this album in full, I’d like to take a moment to talk about extreme metal. Extreme, by definition, is the furthest distance from an average and agreed upon measurement of nominality. In the case of music, every single aforementioned measurement is subjective. That is to say that extreme doesn’t have a single, universal definition. In the case of music and more narrowly, metal, you can see how the definition of extremity has shifted over the decades. That’s, of course, because with each year that passes, bands have been pushing the genre(s) into more extreme territory and the distance to center, AKA the baseline, keeps moving further down the ‘extreme axis.’ It seemed that for a while the push for more extreme sounds, approaches, imagery, and the like was a goal for the genre. After all, metal has always been a haven for the outsider and those who like to break rank with more widely accepted musical sounds and genres.

At a certain point, however, that goal runs out headroom and becomes moot. What we have been seeing along the journey of extreme music are bands who genuinely recognize this and still make uncompromisingly heavy and aggressive music, but with a different goal. In the last few years there seems to be a movement toward creating extreme music that retains its vigor, but also has intentions that are much more worthwhile, in my opinion at least. Acts such as WAKE who fuse the extremes of death metal and grindcore, two visceral subgenres, aim to create albums which are stirring on a variety of levels: thematically, lyrically, sonically, and artistically. With Devouring Ruin, we’ve reached another landmark on this journey of uncompromising, yet elegant, extreme metal. Now, back to the album at hand.

After the pre-dinner shot, comes the main course. Up first is a massive ode to sleep paralysis, “Kana Tevoro (Kania! Kania!).” The Incredible breath of atmosphere on this track is genuinely mind numbing. Repetitive three-note riffs dig into your skull, otherworldly vocals contribute to the insanity, all of which are doused in flammable clouds of atmosphere. Some cultures describe sleep paralysis as being eaten by a demon. While I don’t believe in demons, I do believe in WAKE and this song is hungry.

Each song that comes next in the tracklist builds on what precedes it, but also shows their own flashes of brilliance and nuances that range from subtle to well, not-so-subtle. “This Abyssal Plain” leans much more into the grind leanings of the band and drumming that is just out of this world. After a quick, glitchy interlude in “Elegy”, comes perhaps my favorite track on Devouring Ruin, “Mouth of Abolition.” It’s a massive composition that spans over six minutes with tempo changes, gorgeous guitar tone, and vocals that are perfect in every moment. Along with all of those attributes, there’s a damn fine guitar solo that again proves that putting WAKE in a crust or grind box is not only silly, it’s really silly.

Remember a bit ago when I tried to wax poetic and science-y about the state of extreme music? Well, allow me another quick diversion. One of the things that music does to a surprising amount – given that it’s only appealing to one of our senses – is affect our emotions. WAKE have made a record that addresses a variety of sensibilities and refuses to pander to our somewhat inexplicable fascination with chaos. Take the centerpiece “Torchbearer” as my case in point. If you could chart the emotional bounds of this near-eleven-minute opus, it would be all over the place with anticipation, fear, dread, relief, and excitement. This is just good songwriting. Finding a way to tap into these feelings is in my opinion what adds that special sauce to a song that can take it from good to great or from great to unbelievable.

Frankly, metal and I have been having a bit of a rough patch lately. I’ve not been in the right frame of mind to appreciate what it has to offer and that’s something I’m very okay with. I knew that eventually I’d find my way back, but I knew that it would need to be something special to do so. I’ve done my best to explain why Devouring Ruin is the high watermark of metal for 2020, but until you can pipe this thing into your own ears – you’ll have to trust me. There are so many great moments on this record that I didn’t even mention because of time, space, and my hope that you’ll be just as floored as I was. WAKE are absolutely stunning on this record in every facet and are standard bearers for uncompromising, intelligent extreme metal. Their refusal to aim at the ever-moving target of extremity gives them the bandwidth to focus on becoming the best they can be.