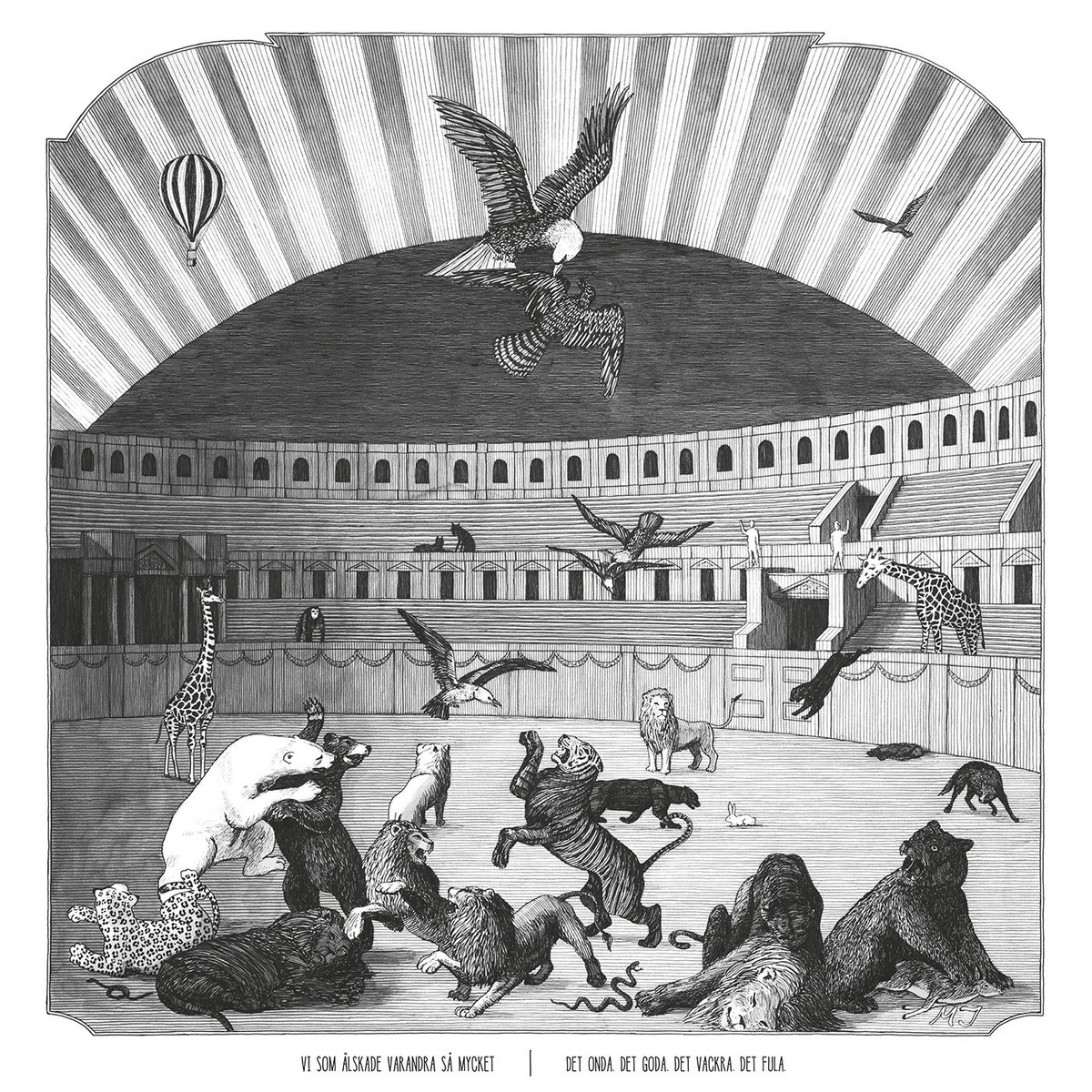 While my music taste has grown over the years I could always hold onto screamo as one of my favorite genres. It combines heavy, thrashing songwriting with atmosphere and a sense of dynamic, while being emotionally mature and introspective. Of course there’s more to it, like the cornucopia of genres many bands mix into their sound, each with a colorful, yet different bouquet. It’s rare to find a screamo band that doesn’t have its own identity and style without ever sounding derivative. The different backgrounds and strong impressionistic feel carried by the individuals following this style of music down the rabbit hole more often than not make for compelling stories. A band who does this especially well is Vi som älskade varandra så mycket, my newest obsession in this genre.

This band with a name that is sure to win you any Scrabble game, made an album called Det onda. Det goda. Det vackra. Det fula. which excels at building unique and, for the genre relatively foreign, triumphant atmospheres. One could even describe their sound as epic, although current internet culture rendered this adjective rather stale.

From the first song, “Kärleken är död”, onwards we are thrust into a spectacle of post-rock influenced lead guitars, massive, gain-dripping riffs and sensible moments of soundscaping. “Kärleken är död” begins with two modulated guitars, one tremolo picked, the other harmonizing over it. The post-rock influence I referenced earlier becomes immediately clear. Soon though, the bass and drums break up the scene with their massive sound, driving the guitars into a quick crescendo before all the instruments come together in a massive wall-of-sound to deliver a verse so corrosive it could melt your face off. The constant melodic work of the lead guitar combined with its almost romantic melodies not unheard of in melodic black metal, make for the gloomy, yet triumphant feel that defines the record. What is especially interesting about this song  is that while the post-rock influences are clear, the songwriting works somewhat anti-cyclic, with many of the more glorious and shiver-inducing moments being delivered by grandiose displays of atmosphere instead of the massive distortion delivered in the verses.

Another fascinating song is “Sioux City” which has a very straightforward and punk-ish attitude. Of course there’s your fair share of melodic tremolo lines, yet this track would also feel at home on a straight up punk record, with it’s half screamed vocals, catchy 4/4 drumming and fist-pumping beat. If you immediately hear the follow up track “Hjärtats förlorade slag” it is quite clear why the band positioned this song exactly as they did. This follow up has a more free-flowing feeling with some of its moments being almost homage to bands like Sleep Makes Waves. Due to the almost numbing harshness of the prior track this open, catchy feeling the harmonized guitars deliver is amplified. Though there’s also some respect due for the drummer, as I’ve rarely heard drum patterns this dynamic and interesting while not being overly off-beat or trying to be jazzy.

As we move through tracks like “Kontakt” or “Dumskallarnas sammansvärjning” we can hear the band’s attempt to solidify this open, almost experimental sound they’ve shown before and the GY!BE style modulation effects you can hear on all instruments is quite the interesting backdrop for all the busy instrumental work the band shows. It’s a certain duality of pragmatism and soaring displays of finesse that makes Det onda. Det goda. Det vackra. Det fula. the album it is.

It really is a record that plays with one or two ideas and plays them out to their full potential. The sheer dynamic of the record while not really straying away from the few sounds the band shows in the opening track makes the record cohesive, along with a sense of authenticity through stoicism. On a production level the record is quite alright, though somewhat inconsistent in a few weird places. This won’t throw me off from listening to it again and again until their next screamo masterpiece.