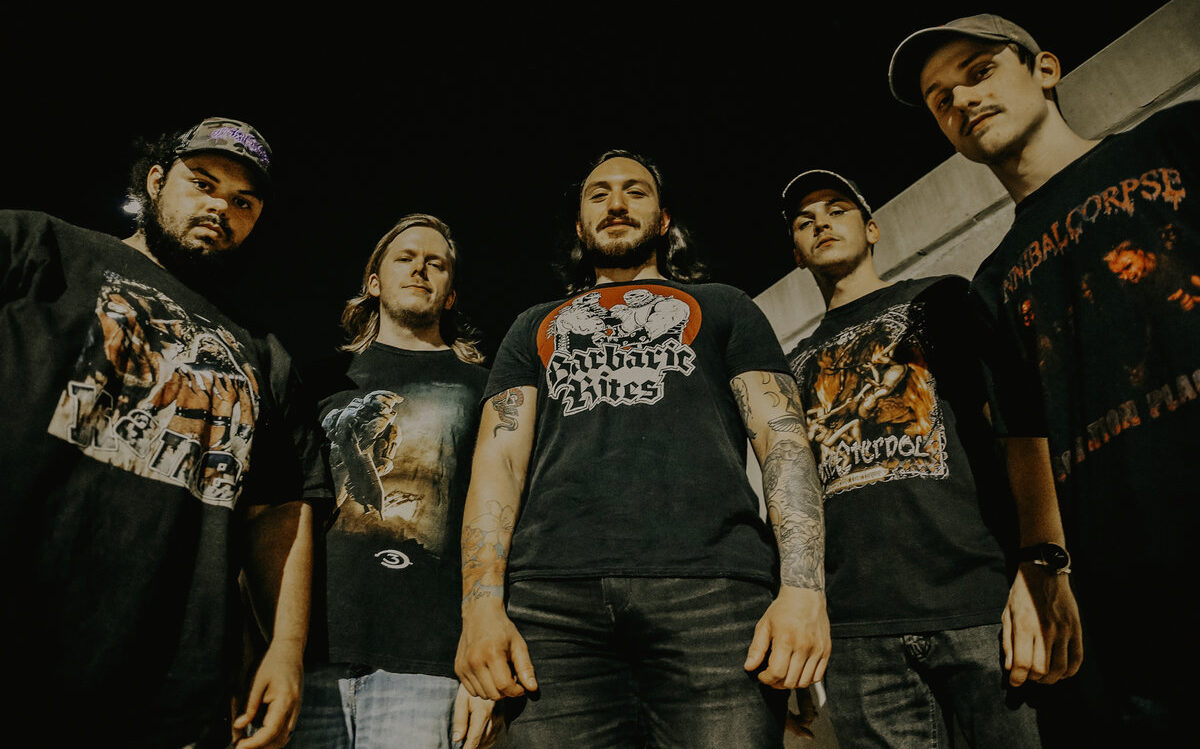 By Jake WaltersSeptember 16, 2022 No Comments

The effortless, concentrated death metal dished out by Tribal Gaze is a thing of disturbing beauty. The Nine Choirs is an offering of stylistic substance.

Texas death metal and Maggot Stomp were just made for each other. That’s my thesis statement for this review, if for no other reason than this proves to be invariably true across the board and for the debut of Tribal Gaze. After a pretty cool set of releases in 2021 – an EP and a split – it’s time for these stalwarts to step out on their own and show the world that they can carry a full-length record. Having Maggot Stomp in their corner with this release is nothing but a boon, and of course, we know that this label isn’t going to just to slap any old band on their roster and move on. With a documented history of acts that merge death metal and hardcore with great success, I was expecting to get more of this with the signing of Tribal Gaze and I was thankfully right on the money, as they say.

Hailing from Longview, Texas, the quintet that calls their collective creative endeavor Tribal Gaze make death metal – pure and simple. This is by no means meant as a slight to their vision or sound simple a statement to set those expectations. They want to slam your face into the proverbial dirt if you’re listening with headphones or speakers and more than likely would want a literal version of that were you to catch them at a live show. This is frenetic but calculated death metal that leans into the grooves when they appear but never sacrifice brutality for catchiness. They also aren’t dumbing down their approach to win new fans; you’ll either like them or you’ll learn to like them. Or I guess, maybe you never will. Regardless, the band’s confidence isn’t lacking. To begin The Nine Choirs with a six-and-a-half minute death metal song that starts with a blues sample is not only bold but self-assured, and that’s just what they should be. Death metal is nothing if not absurdly audacious, and Tribal Gaze have no issue kicking things off with such a track.

Confidence is key to a band like this, because in many ways that is what can set them apart from other acts that operate in this space. While Tribal Gaze’s mission may not be world domination, they certainly have the courage for it and can coax an oppressive atmosphere whenever it pleases them. “Jealous Messiah” sees them cut the oxygen to the room as we who listen suffocate while banging our heads to the beat with our dying breath. The sampling of a Southern preacher at the end of “And How They Wept For Eternity” hearkens back to SpiritWorld’s captivating employment of this idea and again is a cue to set things off for the following song, “With This Creature I Return”. There’s no loss of intent on The Nine Choirs. Each song is explicitly directed to elicit the reaction and response that it sets out. Overall, this is accomplished to great effect.

If there are gripes that I have with The Nine Choirs, they are small and simple personal preferences. I’d like the album to be paced a little better, and perhaps vary the tempo a smidge more to keep me guessing as to what’s next. With that in mind, however, there is plenty to love on this album. The compositions are engaging and when every part of the song works together to sell the slamming groove parts, it’s a work of art and got my head nodding on more than one occasion.

One of the things that I thoroughly enjoyed about The Nine Choirs is the religious overtones that pervade the album as a whole. The song titles, samples, lyrics, art, and even some of the interluding noise within songs give off a liturgical vibe that isn’t always subversive but uses this atmosphere to tap into the subconscious of those are familiar with these trappings. Texas, by all counts, has a long and storied history with a sort of superstitious version of Western Christianity, and using these elements adds a layer of depth to this album without relying on pointing and yelling about it. While that’s a fine approach if that’s what your after, Tribal Gaze prefers doing this on the sly and letting this ooze out over time. If you’re unaware of the references, tone, or implications of these subtleties, you’re not going to miss out on the whole experience, which is a credit to the writing and assembly of this album. But if you’re like me and were raised in the Southern cousin of Texas churchiosity, you’ll get a lot of this right from the jump.

The entrance of Tribal Gaze into the minds and ears of the current scene of OSDM revivalism is going to bolster those who are reveling in this resurgence. There are riffs, grooves, slams, grunts, and screams, and fans of this stuff are going to eat it up. The Nine Choirs will be on everyone’s mind and in their ears upon release; fans of death metal will eat it up. My only advice is to chew slowly and savor every bite because this is a beefy record that will stick in your throat and choke you right out.