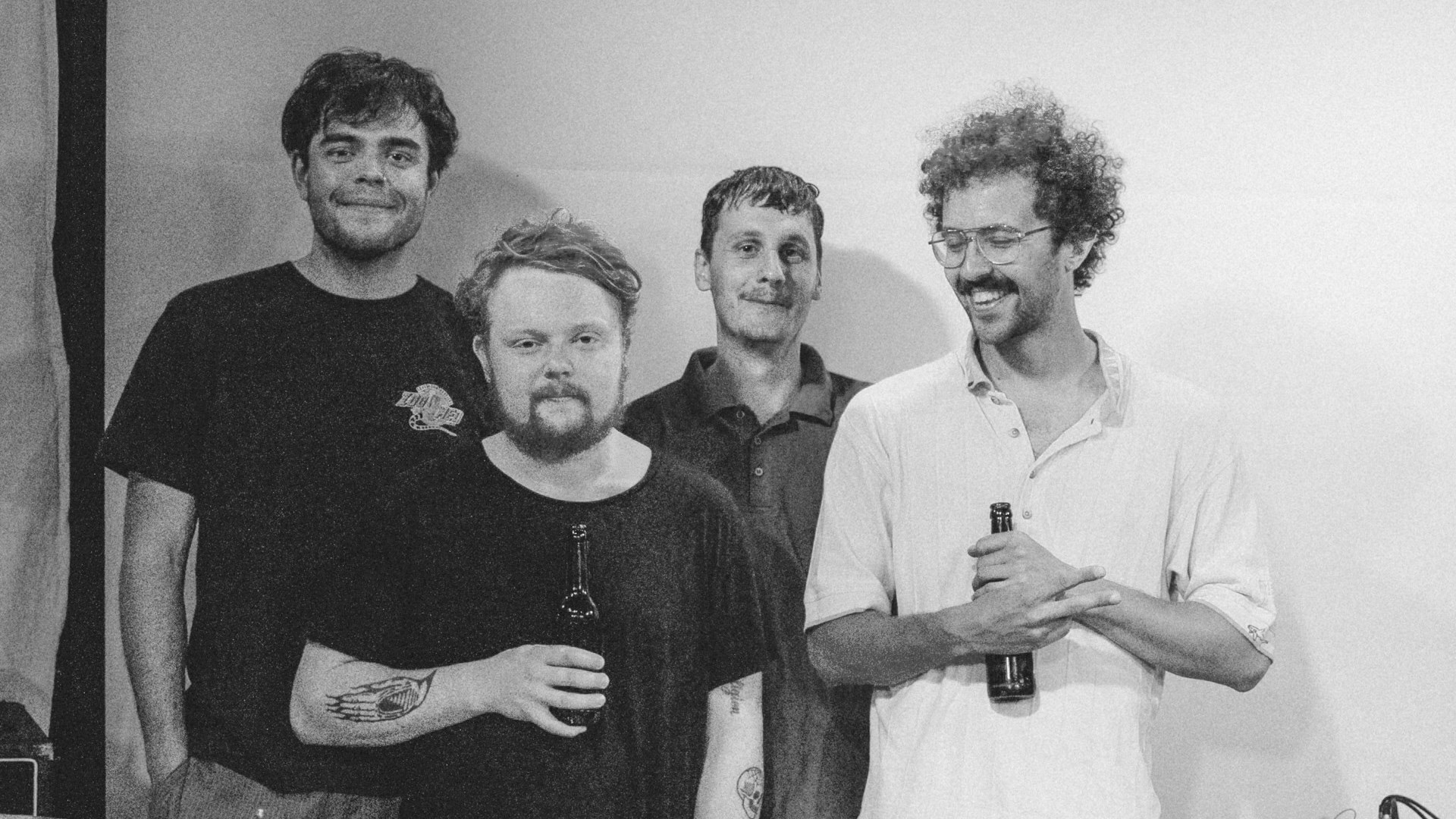 By David RodriguezApril 26, 2019 No Comments

The Physics House Band arrive on your doorstep with a surprisingly fulfilling EP that marks a monolithic turning point in their already superb artistry of soundscape architecture.

1. (in physics) a thermodynamic quantity representing the unavailability of a system’s thermal energy for conversion into mechanical work, often interpreted as the degree of disorder or randomness in the system.
2. lack of order or predictability; gradual decline into disorder.
3. Death Sequence by The Physics House Band

Nothing is more captivating to me than walking the finest of fine lines between becoming absolutely unhinged and impressively keeping things together under threat of that very thing. Like when you see a petite person walking seven big dogs on leashes that could very easily take off running, turning their body into a human sled. It’s a game of chicken that plays out in many forms throughout life, but when it comes to music, it’s especially engaging. The control that skillful musicians exhibit to navigate chaotic soundscapes, never losing rhythm or melody (unless that’s the point), is always something I’ll admire – I can’t even stop myself from eating too many fries during a meal, so kudos, y’all.

Anyway, one of the best examples of precise control and progression in music of the last few years for me has been UK avant-prog band The Physics House Band. Their last album, Mercury Fountain, was astonishingly dense and fun, pretty much setting fire to any and all genre expectation in lieu of making their own path. Now, their newest offering, the Death Sequence EP, aims to shuttle their sound forward evermore with the help of a newly added permanent saxophone (if you just heard a hissing noise, that was me saying ‘yesssss’ over in the corner).

Death Sequence‘s first notes are washed-out and wobbly as if you’re hearing it while underwater. The final notes are full-bore wild, restraints taken off like you unbuckled yourself during a rollercoaster ride. The most important part though? How we got there – the journey, and it’s not a linear one either. The four-, though technically only three-, song EP manages to have more movements and progressions than a lot of so-called fully-fledged albums do.

It’s easy to say there’s a newfound, or at least profound, jazzy influence with the band now that there’s sax, but it’s always been there, albeit more subtly. With sax, we get an extra texture to explore and feel as we’re tossed about from frantic, blisteringly-paced quick sections to airy and withered slow sections. If every instrument was a voice, sax is almost fear-like, stricken by anxiety, uncertain of the future that awaits it. Bass is warm and friendly, though capable of being bold in the face of adversity. The subdued wails of the guitar is almost pained at times, moaning throughout much of the fifteen-plus minutes of music here. The drums are… well, they’re a lot, but primarily act as an internal voice defiantly pushing everything along – the listener, the story as it were, and the music itself. More often than not, the drums are high-paced and apt to conjure feelings of anxiety and panic as well. Synths aren’t so much a voice as they are the environment in which the other instruments exist, and react to. Their lush arrangements are more than capable of painting varied landscapes.

And then there’s the only actual voice of the EP, Stewart Lee. On the third part of Death Sequence, he soliloquies to himself as if we’re not there. It reads as retrospective musings, like someone old and experienced reflecting on their life, mentally weathered by years of emotional turmoil. The calming instrumental arrangement led by sparkling synths, feather-light percussion, and sunny saxophone is contrasted with his words, which are punctuated by a few repeats of ‘I’m the black sheep of the family‘. If that was a punctuation, then the track’s ending is nothing short of an exclamation – the EP places a death grip onto the last shred of order it has as Lee‘s voice contorts into a nigh-incomprehensible yell while instruments form a storm around the vocal. It’s… wild – a denouement that’s a proper opposing end to a track that began with such grace and gentility. The epilogue song of sorts, simply referred to as “???”, does nothing to betray this tone as it ramps up to an almost hostile uproar in record time by way of track fade-in, then slams you into a wall via a brutally blunt and abrupt end. While Death Sequence doesn’t wish to make you uncomfortable, it does everything it can to keep you on your toes.

It’s hard to pick a select moment to focus on with this EP as it all feels as equally urgent and adequate in its expression. But an expression of what? If the title is to be taken at face value, it is a sequence, but of the death of what? Honestly, of order. ‘Sequence’ is even a synonym for order! As entropy is (actually) defined, it’s a gradual decline into disorder, and while The Physics House Band rubber band neatly between clean fusion and a beauteous, pandemonium prog hell, it simply represents a non-linear trip. This music represents the unsheathing of the sword of havoc, a metered degradation that’s as captivating as the fine line it walks between control and losing it. For that reason, I love it.

Apparently, The Physics House Band has more in store for us in 2019, and if this EP is any proper primer for the musicality to be found on that yet to be announced project, I fear for not only my generally okay disposition, but also my AOTY list, which at this rate will be guaranteed to house two projects from the band. Listen up, prog fans: I cannot overstate enough how much you need to hear this. Take Death Sequence in, chew it up, then return to the group’s previous work to not only see the immense growth made in two years, but to enjoy some more awesome music that’s great in its own right.