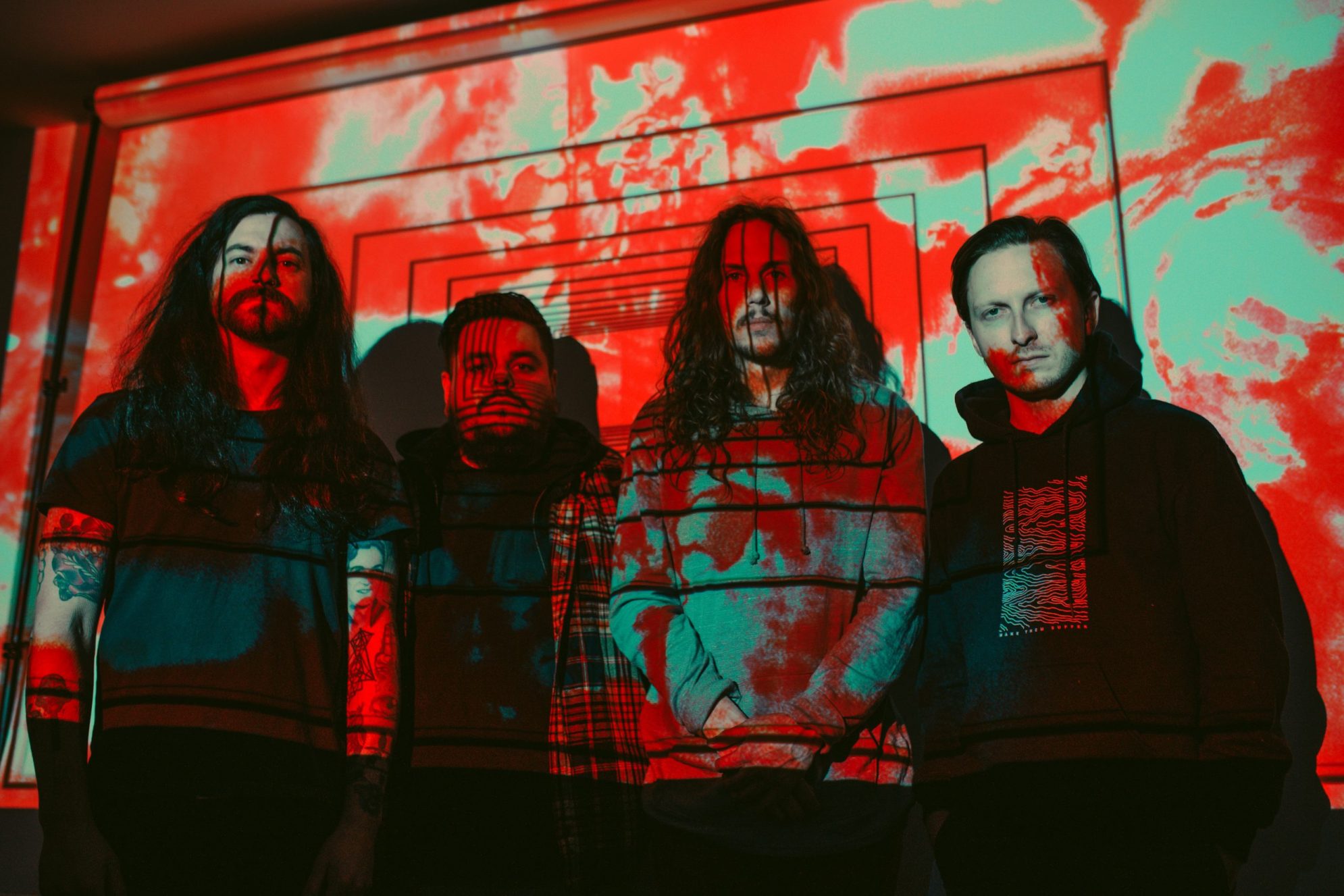 By Shaun MilliganDecember 9, 2021 No Comments

Iridescent is musical beauty and brutality incarnate, as Silent Planet demonstrate the full technicolour spectrum of their capability on a stunning record that bares heart and teeth in equal measure.

Recently, metalcore has struggled under the weight of those condemning the increasingly mainstream-friendly decisions made by several of its associated acts. For some, it’s a dislike of formulaic song structure, or the visible clutches of commercialisation. However, for others, it appears – like nu-metal before it – that snubbing metalcore is simply a popular thing to do, as though the descriptor is something to be ashamed of.

Nonsense; ultimately, all music is noise, and I’ll fight for your right to listen to whatever noise you want – irrespective of another’s opinion on it – until I breathe my last. I say take music on the merits of its execution and enjoyment, regardless of any pigeonhole it’s steered towards. Now, Silent Planet are no strangers to the metal community, and with a slew of strong releases already under their belt, the question is: will the California quartet be the latest to find themselves facing a backlash in the wake of artistic compromise or lacklustre quality?

Not in the slightest. In a nutshell, Iridescent is a phenomenal return, and best experienced wholly from start to finish. The crushing weight of this album cannot be overstated, and when factoring in wider context and compositional choices, the title seems truly fitting. Following an ominous opening, we’re catapulted into a maelstrom that feels equal parts catharsis and carnage. For every haunting, pained melody and melancholic wash of lingering synth, there is an arresting aggression that froths and snarls, refusing to yield.

However, peek beneath the calloused, battered exterior – with its protruding glass, rusted nails, and abrasive presentation – and we find lyrical territory that Silent Planet often tread with reverent honesty. Psychology, war, religion: all familiar topics for the band, though Iridescent possesses altogether more insightful and openly introspective narratives than previous records, many of which directly stem from vocalist Garrett Russell’s personal razing and reconstruction. The vulnerability displayed is commendable, and at times uncomfortable, but don’t think for a second that it’s artificial.

From February 2020, I looped lead single “Trilogy” countless times in the seemingly infinite interim before its successor arrived over a year later. The track sees Russell unfurl a striking lyrical recount of events leading up to – and during – a stay at a psychiatric hospital, where he was ‘reintroduced’ to himself (his own words). Following a short, erratic electronic introduction, the band erupt in deafening fashion. This is compounded by some trademark Silent Planet: neck-snapping riffs; a phenomenally enormous chorus; sublime entwining of cadence and wordplay, and a closing passage that just pummels. It’s everything you could want, and it’s prevalent across the album.

This potent partnership of furious fretwork and inimitable vocal delivery is a prime reason for the band’s rightful acclaim. Rich imagery, poetic analogies, and allegory have always been a lauded component of Silent Planet‘s music, and Iridescent is no exception. Rather than unpick the complex lyrical content here, though, I highly recommend you seek out the lyrics for each track yourself. Not because I’m lazy (I’ve pored and deliberated over every facet of this article for almost a month now), but purely because they make for stunningly rewarding, thought-provoking reading in their own right – even in isolation from the music.

To further illustrate the lyrical/musical connection, weave between the digitised, bass-driven onslaught of “Panopticon” and you’ll uncover a depicted dystopian future in which tyrannical technology breeds disconnect and apathy among mankind. In order to ‘communicate the story of humanity and its traditions being outmoded‘, the band accordingly chose to craft the song’s instrumentals without the use of a guitar. The result runs feral as soon as it is fully unleashed, and does not let up.

Powerful number “Terminal” returns to the realms of wellbeing and Russell’s stay at the facility. It adopts a more ambient, densely textured heaviness that offers an appropriately contemplative canvas for Russell’s disarming vocals and guitar. Expanding on the track, he shared in an interview that ‘during all of this… I began to wonder if the hopelessness was buried too deep for medications to solve on their own. Maybe, I wondered, this is simply the human condition.‘ The video (below) makes for viewing that is equally as compelling as the narrative of the song itself.

“Anhedonia” (an inability to experience joy or pleasure) continues the musical recollection of Russell’s rending, with shouts that ring over the metallic, jagged carnage that the four-piece construct so well. Industrial elements linger in the background, fusing momentary lapses in chaos together alongside clean vocals – provided by bassist/keyboardist Thomas Freckleton and guitarist Mitchell Stark – that contrast while complementing Russell’s animalistic leads.

To reiterate, each song is enjoyable in isolation, but as Russell states, ‘I hope the listener understands that our albums are meant to be understood as whole pieces, and while this song [“Terminal”] is certainly coming from my genuine experience with despair, there’s more to the Iridescent story.‘ The album’s titular closer epitomises this: “Iridescent” rounds off a highly engaging and affecting journey with a slow build into a crescendo that is – quite frankly – apocalyptic. Yet, the instrumental brutality still bows to the poetic beauty of its cries: ‘Burning through a patchwork sky/You left on chariots of fire/I only know that you will go/Where only love can bring you home‘.

I’ve spoken a lot about Russell so far, as his experiences are intrinsic to the core of Iridescent. That said, it is imperative to acknowledge that Silent Planet‘s demolishing sound is the result of four incredibly talented individuals whose bonds have survived through strenuous circumstances. This is captured in the utterly titanic performances present on Iridescent. From first to final moment, each and every element bites at the throat – holding your attention captive.

Russell’s vocal delivery is teeming with the rawness of his experiences, from the searing highs of “Second Sun” to the guttural explosion on “Translate the Night”. Stark’s impeccable guitar work deftly unleashes choral walls of distortion interjected by eviscerating riffs: see “Trilogy”, “Alive, as a Housefire”, and “Till We Have Faces” for prime examples. Bass and keys provided by Freckleton dominate the album’s low-end heft; synths and other electronic components partner with his gargantuan bass work, enriching an already rich tapestry of textures. Then, of course, there is the ever-present anchorage of Alex Camarena’s drumming – pinning every aspect of Silent Planet‘s sound together with a concrete, masterful command of his kit. Precision and power bleed with every kick, cymbal, and absolute battering of snare.

I could go on, but I won’t, because your own experience with this album is more important than whatever I might have to say about it. Silent Planet have very clearly – once again – given every fibre of themselves, however painful, to produce Iridescent. They have weathered tumultuous times, emerging bigger and better, and consequently, each moment in Iridescent‘s dynamic company only further cements my enjoyment of their ever-evolving, crushing sound. Surrounded by an ocean of peers whose ripples of appeal may appear to be diminishing for many, the tide very much continues to favour this quartet. Iridescent balances soaring finesse and subterranean ferocity in a manner that shows Silent Planet as an unstoppable force.