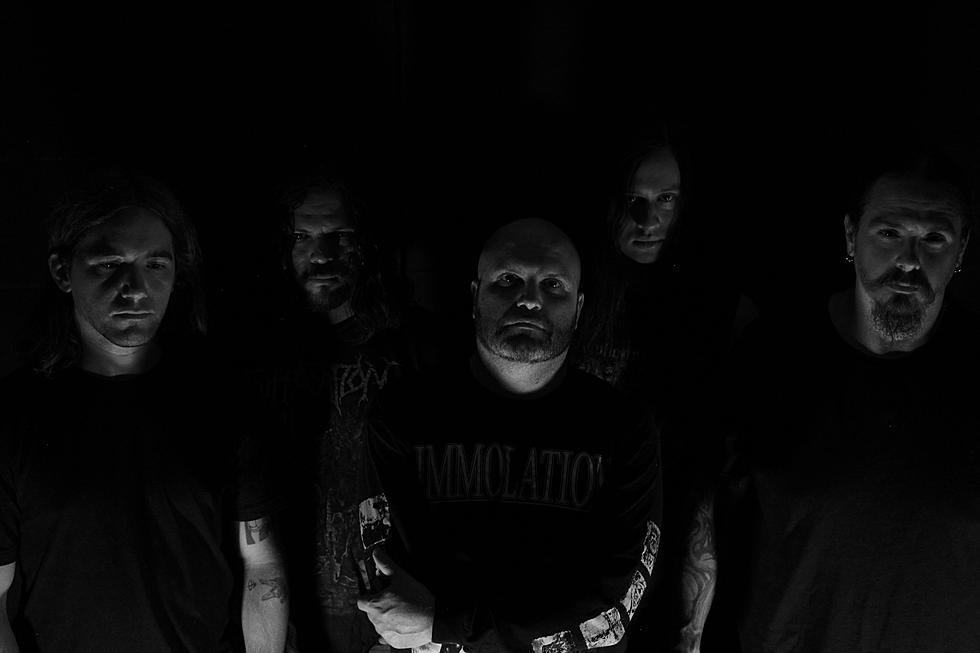 By Jake WaltersDecember 8, 2021 No Comments

At year’s end, a new contender for the finest death metal outing enters the ring. Rising from the underground, Malignant Altar are doing everything right and may end up the last band standing.

Okay, so Malignant Altar. You probably know the story so far; a band that’s almost just Necrofier doing death metal and taking the underground by storm with two stellar demos. Now the time has come for them to release their debut LP. They are doing so through the delightfully dirty Dark Descent label and the hype, for many, has been building for a while. When I found this band, I knew they’d be going places, not only because of the general response to their meager output but also just because that output sounded so damn good. So, I guess you could say that I’ve punched my ticket for the hype train as well and have seated myself in the dining car, waiting for that big platter of riffs and blast beats.

Okay, so the first course arrives and the first thing I hear…are chimes? Unexpected, but cool. Ah, there’s those filthy riffs and trouncing basslines. “Channeling Impure Apparitions” is the first track up and it’s both exactly what I expected and a little more. I’ve always been a fan of the overwhelming atmosphere of death metal, especially this brand of it: the guitar tone clouds the mood, the blast beats that feel like an all-out attack, and the vocals that seem to erupt from some heretofore unknown dimension. That’s all here and in great amounts. But what’s even more impressive is the balance found herein. Malignant Altar are reaping the benefits of loads of talent and being one of the final entrants into this royal rumble of a year for death metal. This shit rips, plain and simple.

I’m an unashamed lover of death metal and there has been a lot to love lately. The OSDM revival has kicked into high gear with plenty of sound-alikes, as well as forward-thinking bands that are expanding on this new wave – this Neo-OSDM, if you will. Bands like Hyperdontia, Mortiferum, Morbific, and more are simultaneously taking the genre to new heights and leaving it right where they found it. Malignant Altar are definitely in the conversation for one of the most talented bands in this space, all spawning from great songwriting and the musicianship that allows these ideas to bloom to their full potential. “Usurping the Pantheon Crown” is a great example of a mid-paced, lurching death-doom song being given enough space to breathe at the right times, and being utterly suffocating at others. These dynamics make for a massively enjoyable and listenable experience.

Speaking of dynamics, coming off the aforementioned track, “Usurping the Pantheon Crown”, comes the sickest, hardest, death metal song of the year, “Belial Rebirth (Metempsychosis)”. Aside from having a kickass name, this song just goes off. The chaos is maddening and the rhythm is hypnotic, and if there’s a track that’s out this year that could bring about the birth of the Antichrist, it’s this one. I think now is also a great time to mention one aspect of this record that I absolutely love, and that is Mr. Dobber Beverly’s drums and drumming. I’ve been a fan of his work in Oceans of Slumber and Necrofier, but things here are just on the next level. As a sucker for a pingy snare, this one is balanced just right to have both hit and tone, and the way he flickity flams the kit from song to song is just a thing of beauty. He’s really establishing himself as one of the most versatile and proficient metal drummers around.

After a brief intermission from the instrumental title track, the chimes sound once more, indicating that the final course is on its way and holy shit, that rack of baby back riffs is meaty. “Ceremonial Decapitator” is a concisely titled and inversely lengthy track that feels like the point of the whole meal, to begin with. Describing music is pretty much as difficult as describing food – translating a sense to the page is a tall order. What I can say, however, is that this song is an absolute ripper, filled with fills, blast beats, riffs, and vocal echoes that make us all love the genre. Dessert is in the form of the first lead single from the album, “Rite of Krasue”, and guess what? It’s pretty sweet, but also balanced, like a delicious chocolate chip cookie with a dash of sea salt on the top to keep things from being too indulgent. The joke is on Malignant Altar, though, I love salty-sweet things.

So, as the train pulls into the station, I think I can say that was the finest meal that I’ve had all year. Malignant Altar have become legends in a way already, and their debut LP will do nothing to detract from the meager but grand legacy. This album does a lot of things well, but most of all, it does my favorite things the best. It may not be a perfect album by some people’s standards, and that’s fine. But as for my taste, Realms of Exquisite Morbidity will go down as the cream of 2021’s death metal crop.