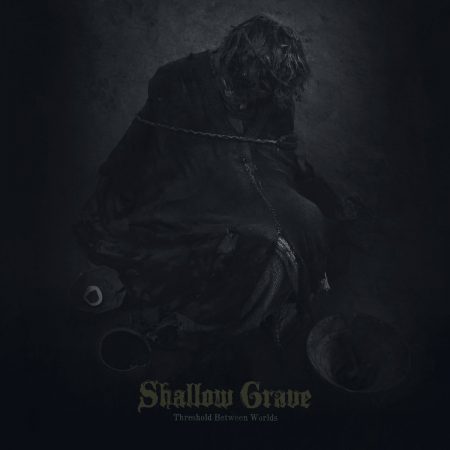 By Ashley JacobNovember 23, 2018 No Comments

Shallow Grave offer up some menacing doomy delights in a well crafted spine-tingler of an album.

Threshold Between Worlds is a relatively straightforward affair. The album is four tracks of meaty doom with a post-metal tint, and sinister vibes are kept at the forefront of its persona. It lives and breathes slow-burning heaviness, and pulls it off rather well.

There are two main elements that make this a decent set-up: The basic raw pulse, and then the eerie soundscapes which overlay it. The latter, in my opinion, is where the real magic comes in. Though they deliver in various pitches and squeals, the majority of these noises, unless I’m very much mistaken, are created rather organically. The guitarist(s) seem to have a natural talent for manipulating reverberation and feedback, giving the music a ghoulish Black Sabbath quality. It’s the kind of primordial warping of distortion that dudes like Stephen O’Malley and Greg Anderson of Sunn O))) admired and subsequently made a living out of.

I also detect a glimmer of keyboard work, albeit done subtly. All in all, for all of its rough and readiness, Threshold Between Worlds is pretty technical in its own right. The band seem intent on making the record a spectacle of demonic other-worldliness rather than a straight-up riff-ride.

The Black Sabbath influence is particularly prominent in the opening track, “The Horrendous Abyss”. In these opening segments, the heaviness on offer is kind of old school and bluesy. But Shallow Grave‘s menacing ideals shift towards a more modern and sludgy perception of metal, which is established primarily in the second track, “Garden Of Blood and Bone”. By this time, listeners will have grown accustomed to the muffled snarls of the vocalist and the jaw-rattling bass-work. And so the album appears to find its comfort zone, until the final title track, “Threshold Between Worlds” chimes in and serves as the appropriate thunderous send-off for an album of this kind.

There are also some compelling experiments taken in this record. One of them is the notable changes in tone within each song. You may at several points want to double check that you are indeed hearing the same track you played seven minutes ago. It might seem like a daft observation considering that there is a small thing out there called ‘progressive music’. But within the conventions of such a pacy doom record, it’s interesting to suddenly hear a cessation of rhythm, and then a replacing melody with an altogether different pulse. I actually find it to be one of the most enjoyable elements of the album, which is particularly noticeable within the first two tracks.

There is just that little bit more than the standard affair happening here. Threshold Between Worlds is as noisy and ominous as the best of them, and if hypnosis is the name of the game in slow brooding metal, then Shallow Grave nail it. Their music is crafted patiently and with the right attention to production. It is a doom-laden tumble through the gates of the underworld, but one which is engineered by no half-measures, making it pure evil, plus pure enjoyment.