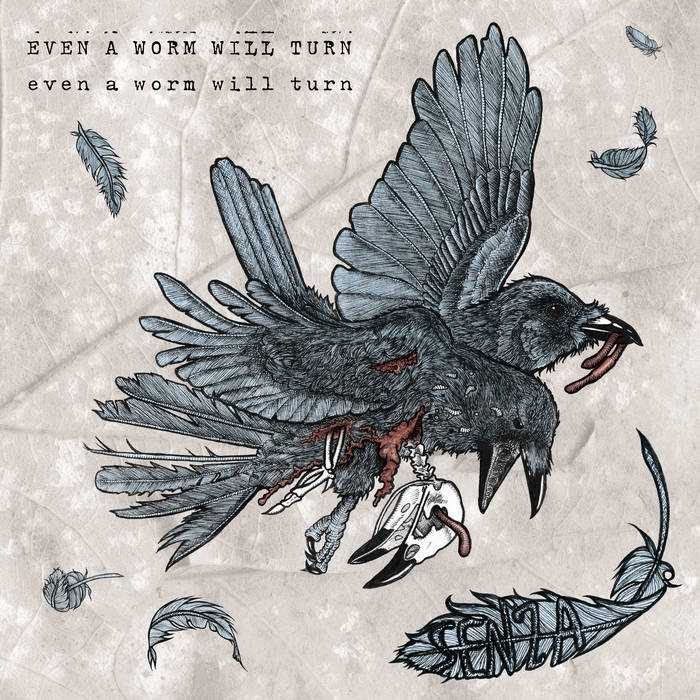 Senza – “Even A Worm Will Turn”

Senza have matured a fair deal, this is visible far beyond simple prowess. Even A Worm Will Turn blasts the listener with equal parts of composure and abrasion.

Senza, an up-and-coming band from Eugene, Oregon, is bending mathcore to their unique will, thus shattering listeners’ expectations guns blazing. They have been an active group since roughly 2015, as the release of their self-titled debut is the only chronological indication of this. They don’t have a lot of material to their name, but every new little bit is more ferocious, daring, and distinctive than the last. So, just recently they have released their second full-length album, rather forbiddingly titled Even A Worm Will Turn. Judging by the fairly creative and slightly grisly cover art one could say it will be a bumpy ride. That’s what I thought as well and it couldn’t have been further from the truth.

Even A Worm Will Turn starts out eerily with a slow build up littered with cymbal accents, a very very fat bass, and loose percussion leading the way to the next track with errant screams. This is right about where the album basically says “Open up, it’s real!”. Before I continue, I’d just like to note that save for “Constant Air of Casual Indifference” and “Swarm” we don’t really get any proper moments of respiro. ‘What goes on?’ you might ask, well… I’m guessing the following: when no one was looking Senza looked for the most frantic mathcore out there, slapped some trv black metal vibes on top, took the usual screaming up to ‘relentless, demonic, high pitched screeching’ and recorded thirty-two and a half minutes of mind-bending angst, basically.

The dynamic between the aforementioned elements is very tastefully attained. Transitions from pure chaos to blast beats to sparse gloomy chords are done either suddenly or gradually and they always deliver. No track underlines this better than “Imposter”. It showcases a balance akin to progressive music which is nothing short of spectacular. The record is a mad roller-coaster up to the very end. Speaking of which, the ending track “Echoes”, clocks in at a whopping nine minutes. It’s a towering epic which takes us from the slowly paced segments all the way to the sonic storm that brings about the end of the ride, fading out as slowly as the whole thing begun with sparse and dark chords.

This churning affair is brought to its height partly because of the insane energy and prowess of the members and partly due to how the production was wrapped up around the ideas. Even when all the instruments bang like the mother of all torrents on your door, there’s still enough room between the sounds to distinguish each and every kicking bit. When things go down a notch, you can feel the depth of textural nuance in every note. Still, the tremendous amount of physical stamina required to voice such creations and the technical prowess required to execute them aren’t the most impressive part. That goes to how this entire roller-coaster was put together. This isn’t just the mark of creative minds being put together but also the mark of how well they all jive together.

Senza aren’t simply a mathcore band. They are a hardcore band that extend each limb into a different musical territory, managing not only to keep its balance but to fly with all their limbs rooted where they landed. Rare is such a communion of favorable factors. Even A Worm Will Turn is simply put, one of the finest hardcore records around and it will be giving a lot of albums a run for their money, at least for the time being.