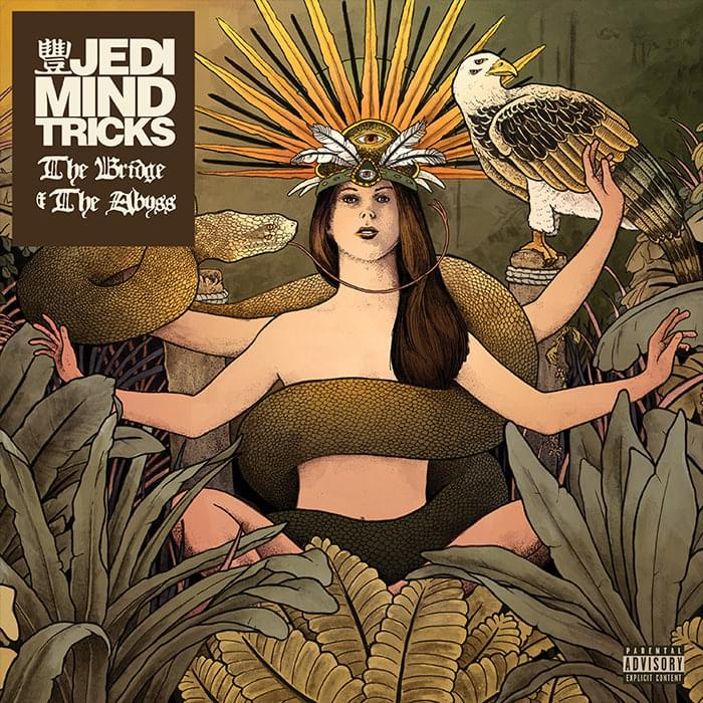 Jedi Mind Tricks – “The Bridge And The Abyss”

Jedi Mind Tricks continue their reign on top of the underground hip hop scene with their ninth release The Bridge and the Abyss.

I’ve been rocking with Jedi Mind Tricks since 2002, a few years after their second record, Violent By Design, came out. The Philadelphia hip hop collective has had a few line ups in their existence, but Jedi Mind Tricks has mainly been made up of MC Vinnie Paz and Stoupe The Enemy of Mankind as the producer. Jus Allah was a second MC for two stints, rapping on Violent By Design (2000), and then on A History of Violence (2008) and Violence Begets Violence (2011). Stoupe actually left the group for a few years from 2011 to 2014, so he was not on Violence Begets Violence. Vinnie Paz has also released three solo albums and one EP. He also is in a group called Heavy Metal Kings with Ill Bill (formerly from Non-Phixion and currently in La Coka Nostra). Vinnie also stays busy fronting a super group called Army of the Pharaohs. He’s one of the busiest men in hip hop, releasing countless projects for over 20 years. The beauty of Vinnie’s relentless work ethic is that you usually don’t have to wait long for one of his projects to drop.

The first thing I’ve noticed with The Bridge and the Abyss is that it has the same feel as their last record, The Thief and the Fallen. Jedi Mind Tricks have always utilized interludes to let Stoupe shine, generally making beats around movie samples. The past two records have featured Icelandic vocalist Yes Alexander on the interludes. Her hauntingly beautiful voice over Stoupe’s theatrical beats are scattered throughout the record. The audio quality on this record seems to be a step down from JMT‘s previous offerings. The vocals are a little too hot, making the music seem like it’s in the background. As you may have realized in the intro paragraph, the word ‘violence’ is in many of Jedi‘s album titles. That has been, and will continue to be Vinnie’s M.O. Though Vinnie has calmed down a little bit over the years, the lyrics are generally extremely violent. Vinnie also likes guns, a lot. Jedi Mind Tricks is definitely categorized as boom bap or battle rap.

While Stoupe was on his hiatus from JMT, he worked on production for an R&B group called Dutch and he also started a hip hop group with multi instrumentalists called Red Martina. Stoupe handled the main production of this album, but many songs were co-produced by C-Lance (Enemy Soil’s producer), multi instrumentalist Aaron Hiltz, and long time JMT collaborator Scott Stallone. With Stoupe’s return to JMT back in 2014, he brought with him Ish Quintero from Red Martina. Ish is all over the album, lending his talents by playing organ, guitar, bass, piano, horns, and turntable scratches. C-Lance doesn’t just make beats either; he’s credited with playing piano, guitar, and bass. I think the element of the live instruments over Stoupe’s beats gives Jedi Mind Tricks a more layered, organic sound.

Over the 19 tracks clocking in at just under an hour, Vinnie Paz spits his signature angry and braggadocio bars over Stoupe’s brilliant beats. Interludes break up the assault of Vinnie’s raspy boom bap vocals. There are never any bad or skippable songs in Jedi‘s catalog, but some songs stand out more than the rest. “San La Muerte” was the first single off of The Bridge and the Abyss, and after waiting 3 years since JMT‘s last album, it felt good hear Vinnie rapping over Stoupe’s beats. “Hell’s Henchman” is Stoupe’s nastiest beat on the record, and perhaps my favorite track. It features an evil, Halloween theme-like beat and distorted guitar laced under Vinnie speaking about guns and Old Testamant characters. Unlike older JMT records that were riddled with features, there aren’t many on The Bridge and the Abyss. However, “Torture Chamber” notably features CZARFACE, which is an amazing group made up of Wu-Tang Clan‘s Inspectah Deck and Esoteric from Army of the Pharaohs and The Demigodz. Esoteric not only spits his double time intellectual bars, he provides the best turntable cuts on the record. The best feature has to be the late Sean Price on “Legacy of the Prophet”. I became a fan of his from his feature on “Blood Runs Cold” off of Violent By Design.

I wouldn’t call The Bridge and the Abyss Jedi Mind Trick‘s best album, but it’s no slouch. Not too many beats blew me away which is unusual from Stoupe, but I do love the addition of the live instruments. You generally know what you’re going to get with a JMT album – fire beats and brutal bars. I generally listen to djent when I workout, but Jedi never disappoints when you need to blow off some steam. The Bridge and the Abyss isn’t anything groundbreaking, but anything from Vinnie will be near the top for best hip hop album of the year for me. Listen at your own risk.