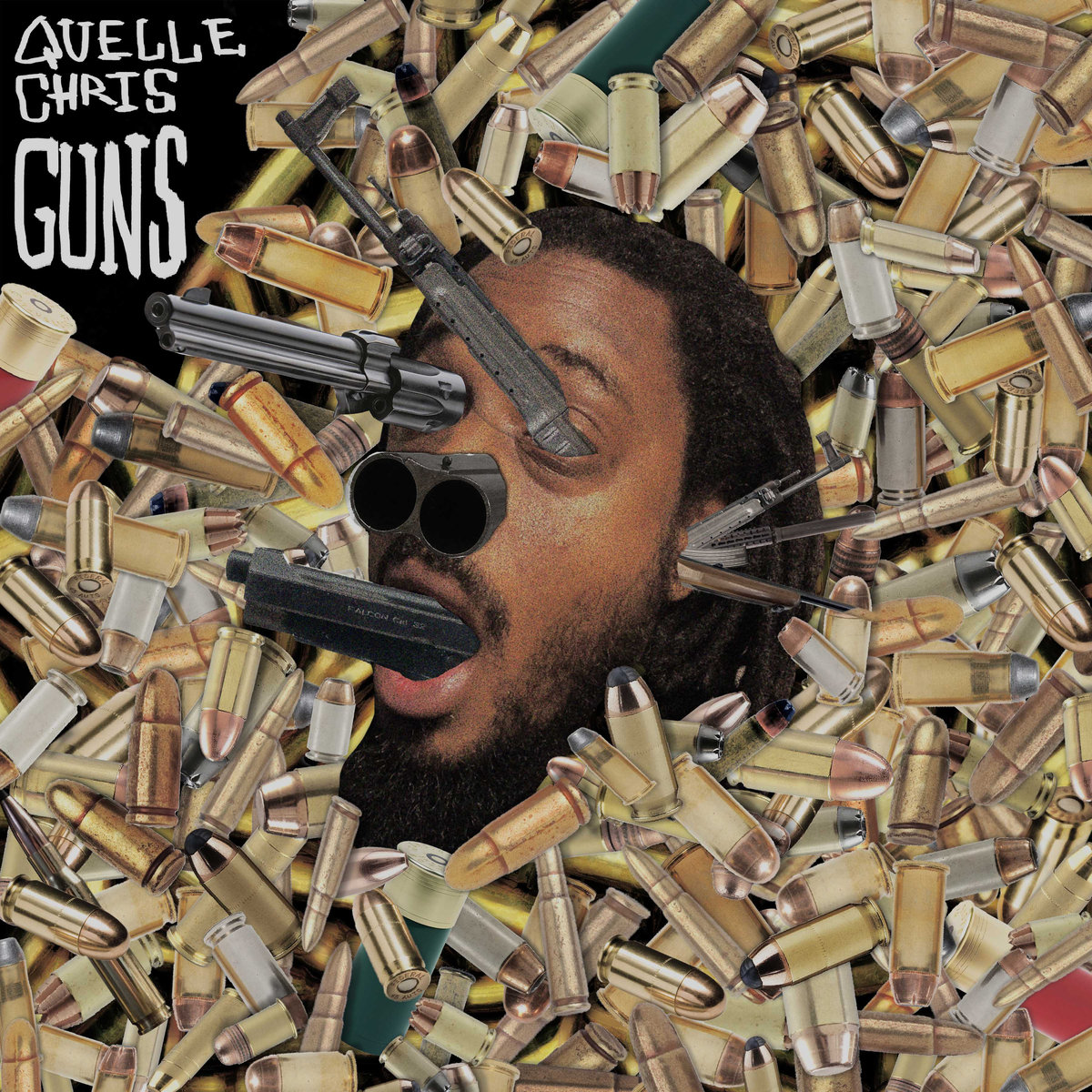 By David RodriguezApril 21, 2019 No Comments

Guns may be sardonic and off-kilter, but that’s to be expected from Quelle Chris, one of indie rap’s preeminent and most biting minds.

Fully, burner, gat, yomper, piece, chopper, tool, blickie, cannon, heater, problem solver… dick. All AKAs for a guns, at least in America. We, uh… have quite the relationship with guns here, to the point where it regularly permeates international news. Even today, April 11, is the memorial celebration of LA rapper Nipsey Hussle who was tragically shot and killed in broad daylight in front of friends and fans on the corner of Slauson and Crenshaw in LA on March 31. For as many pet names we attribute to guns, we also have similarly numerous things in life that we as people weaponize, against each other and ourselves equally. Ultimately, Guns, the newest Quelle Chris album, is an off-kilter, occasionally sardonic analysis of all these things and more.

The fact that the record is named Guns gives away the fact that guns themselves would be a topic of discussion, and they are, but it’s also a metaphor for the things that ‘trigger’ us and make us tic. The title track gets the obvious out the way with clear references and analogies to gun violence, but more so how the fear and anxiety of becoming a victim of gun violence is weaponized against us:

‘Kelly lit her school up like it’s Fourth of July
Where she from, them 22s more patriotic than pie
New Year shoot up the sky
Shooters boot up and ride
Popos show up and fire
Know there’s nowhere to hide‘

How you interpret these themes depends on what walk of life you’re from, but it’s meant to be an emulation of this expressive fear that’s prevalent across America: fear guns? Better get one. What stops a bad guy with a gun? A good guy with one. All of this is rapped reservedly by Quelle over a crisp beat led by percussion and piano. It’s all very disarming and contradictory, but it’s something I welcome as I’m a fan of pairing grim themes and lyrics with sunny, upbeat instrumentation. The sunniness is played straight sometimes – “You, Me & Nobody Else” is an ode to the serotonin high of love that sounds ripped straight from the early 2000s. It has a real genuine attitude and even features Quelle‘s wife and fellow rapper Jean Grae showing equal affection toward her partner – a sweet moment with some breeze to it in an otherwise dense album.

Even still, Guns has a great heft to it – a density I can’t hope to decipher in even half of in this review, not to mention I would probably be overestimating my own understanding of what Quelle‘s trying to put down. Hot topics like racism collide with his shrewd artistic approach in a couple songs. “It’s the Law” examines the racist roots of religion’s incorporation into penal code. The Detroit rapper’s cadence takes on a flatly conversational shape, as if trading snide barbs with a political pundit on a talk show: ‘sin ain’t a sin if the pen pushes them vs. us’.

Naturally, the heated egoism of “Mind Ya Bidness” might seem out of pocket for an album like this, but when you think of how conceit and pride (and, I would argue, toxic masculinity) are weaponized, it’s a perfect fit. Quelle‘s boisterous, braggadocious caricature is profane and venomous, placing ample bass in his voice to spit head-nodding lines like ‘I run the game with the Jeanie, no cheat code / For the fill up, psycho killer like DEVO‘. At first I thought he mistook “Psycho Killer” as a song by DEVO, and while that seems to actually be the case, it’s now been adopted as a JoJo’s Bizarre Adventure reference by some fans… because everything is a JoJo reference at this point.

Rumbling through “Mind Ya Bidness” and similar track, and single, “Obamacare” is some truly apocalyptic production. Low bass hums and snappy drums not unlike the sounds of the arsenal on the cover lay the foundation for a descending piano line on the latter track. The former is glitchy and dark, like I’m reading a creepypasta about a killer video game or something. It’s imbued with an almost horrorcore vibe which, given Quelle‘s origin of Detroit and its regional hip-hop history, could be more intended than I think. He handles much of the production, but gets some help from pals Chris Keys and Dane. It really runs the gamut of indie hip-hop fashion, from weird to beautiful. Skittering drums, eerie sampling, jazzy movements, and purposeful quirkiness all culminate to make a hell of an album that makes you think, something profound and indispensable that perhaps couldn’t come at a more appropriate time.

A lot seems to be on Quelle Chris‘ mind. The most impressive part about Guns is how well he was able to concisely, clearly, and completely express those thoughts within the span of an album. For those like me that find it harder to connect with more left-field hip-hop artists for whatever reason should find a great digestible example of the art that doesn’t sacrifice much of the nutrients in this record. It’s armed to the teeth with ideas, and Quelle hits all his marks in the execution of them.