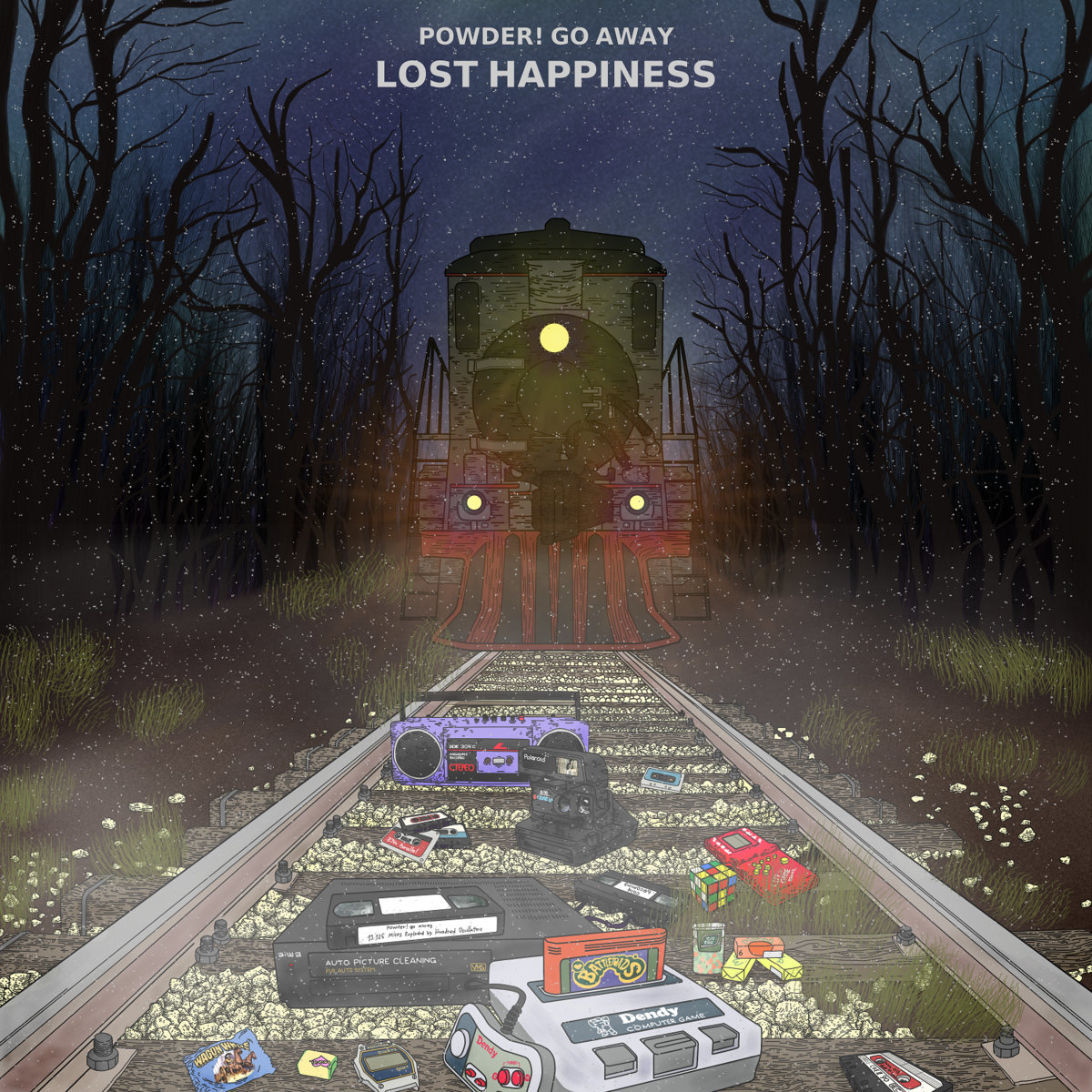 By Billie HeltonDecember 31, 2019 No Comments

Powder! Go Away display great songwriting capability with an incredibly diverse and unique take on post-rock.

Post-rock has been one of my favorite genres for a long time now due to its diversity. There are so many directions the sound can take while still remaining in the same category. Powder! Go Away prove this to be true with how eclectic Lost Happiness is. My favorite aspect of this album is its retention of a strong post-rock focus while exploring much more.

Post-rock is wonderful in its ability to feel emotional in playing. Lost Happiness is incredibly somber and sad, but there are still moments that spark bits of hope and joy. “Moscow-North Pole-Vancouver” is a great example of this, and one of my favorite songs on the album for its heavy inclusion of math rock influences. I don’t think I’ve heard the combination of these two genres executed so well before Lost Happiness, and it’s really refreshing to listen to.

While there are a couple surprise math rock jams on this album, the bulk of it is more focused on that beautiful post-rock core that you can feel deep in your heart. “Losing Yourself” feels more like an interlude than a full track, yet the two and a half minutes encompass so much anguish and a bitter sadness that it is just as impactful as nearly any other song. None of them are particularly long, with all 11 tracks coming in at just under 36 minutes. Even so, each one can carry its weight.

“Locomotive” sits right in the middle of this album and will hit you like a train itself. It is in my opinion the best, as well as the most diverse, track on the entire album. It is also the only track to feature vocals, in a short burst of dissonant black metal screams. But before you get to that point, this track winds up slowly but surely. It gains more force and ferocity with each passing second like a steam engine in itself before it bursts. The crescendo sees an ascension into a full-on post black moment, with a dreamy tremolo picked riff and blast beat and the aforementioned growls.

The first time I heard “Locomotive” it blew me away honestly. It’s such an amazing track and is one of my favorite songs of the entire year. Overall, Lost Happiness has probably solidified itself as my favorite post-rock album of the year. The textures and atmosphere are fantastic, and the production is stellar. There isn’t any empty space in the mix and everything is balanced to enable the ability to really hear and feel all the instruments.

The last two songs on Lost Happiness are a perfect end to it and seem to tell the tale of inspiring hope after so much dark. “One September Morning” is a beautiful and powerful post-rock track that briefly hints on the more mathy moments with a flourish near the end of the song. “Follow the Sunset” is an amazing end, as the track is almost the exact same length as “Losing Yourself” but is just as impactful for the exact opposite reason. It is upbeat and inspires you for a better tomorrow, like a light at the end of the tunnel.

The album art for Lost Happiness features a train nearing a bunch of nostalgic 80s/90s toys on the tracks. A Super Nintendo, boombox, and rubix cube among other things are about to be crushed under its weight. A lot of the music present here is evocative of this art and name, with the dissonant and dismal songs certainly hitting the nail on the head. It’s wonderful how it wraps up with the proverbial light at the end of the tunnel then, and I think it’s a touch that makes this album really come full circle. Powder! Go Away made such an impactful and great piece of music here and everyone needs to get on it!