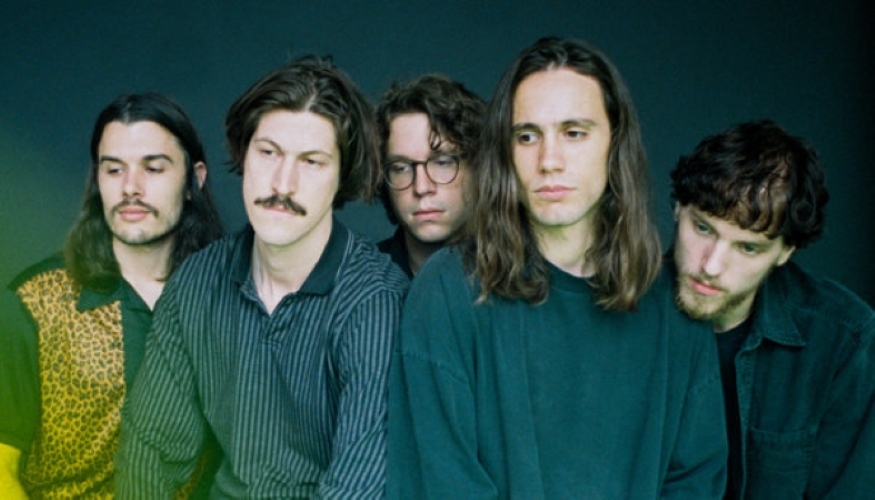 When I hear a band for the first time, I have a bad habit of trying to find other music to compare them to. Typically, it’s just because I want to categorize the artist for myself or I want to introduce them to a friend. It becomes the colloquialism in conversation where I inevitably attempt to compare the new music I find to something familiar to others. I had the same attitude going into my first listen of Forward Motion Godyssey, the sophomore album from the self-described ‘rock and roll’ band Post Animal from Chicago, Illinois. ‘Rock and roll’ doesn’t seem like a concise enough descriptor for music from 2020, especially since music genres have become even more segmented; however, I came to the realization that any category I grouped the band into could easily be proven false pretty early on, and that not one description would properly match the energy and inventiveness of their music. Post Animal find fresh ways to ultimately break expectations in all of their songwriting, allowing for an album that is enjoyable to listen to from beginning to end.

After researching the band’s history, I learned an interesting, yet unsurprising fact: each member of the band is a primary songwriter and will sing lead on the songs they write. It seems like there are so many bands today that have one principal songwriter, essentially utilizing their band mates as studio or live musicians. The solo method is tried and true, but by having each member write songs to bring to the rest of the band, Post Animal avoid their music ever becoming stale or monotonous. One moment, you’re headbanging to the aggressive and heavy guitar riffs of the self-titled track “Post Animal” and the next, you’re lost in the haunting and psychedelic atmosphere of “Fitness”. Although the songs differ in style and feel, the album doesn’t sound disjointed at any point.

The first song I had heard from the album, “How Do You Feel”, sounds as if The Weeknd fronted his own jam band, combining catchy r’n’b melodies with spacey synth and guitar layers. It is a perfect track to use as a single for the album, as it is packed with strong grooves and powerful lyrics. It may not necessarily make you get up and dance, but it definitely has a bounce that can be heard in some of the best laid-back funk songs. During the bridge section, the groove switches from a half-time shuffle to a straight beat, introducing a loud and virtuosic guitar solo. This part takes the energy of the song up a notch, which eventually leads to one of the strongest climaxes on the album.

While Forward Motion Godyssey doesn’t generally follow the rules of one specific genre, it definitely does contain some interesting sources of influence. “In a Paradise” contains choruses where the melody line matches the heavy underlying guitar riff, similar to early Black Sabbath, while “Safe or Not” uses new wave-esque guitar melodies and group vocals to create textures not unlike quintessential Talking Heads songs. In addition, plenty of the songs – specifically “Your Life Away” and “Damaged Goods” – contain strong progressive rock elements that can be traced back to bands such as Styx, Yes, and the Sorceress era of Opeth. Post Animal make it seem effortless as they seamlessly combine these classic styles of music with their poppy melodies.

My favorite song on the album is definitely “Schedule”. This song does pop music in the best way possible, as the entire thing is fantastically catchy, but doesn’t rely on typical popular music tropes. It utilizes chord structures and harmonies that are reminiscent of the later music by The Beatles, which showcases that Post Animal are not afraid to try out something different. In this case, their experimentation resulted in one of the most memorable tracks on the album. As the bridge hits and the music builds, the song achieves a feeling of triumph, leading to a gorgeous outro. “Schedule” absolutely showcases the genius songwriting and orchestration that the band is capable of.

Forward Motion Godyssey is an album I was not expecting. To be honest, I thought I was setting myself up to listen to a basic pop rock album. I figured I would get a couple earworms stuck in my head for a couple hours but would ultimately forget about the songs in a few days. I could not have been more wrong. Post Animal helped to remind me what it feels like to be fascinated by music. The album has so many intriguing and pleasurable elements that made me want more than just the 48-minute runtime. Even if the band’s genre-bending combination of psychedelic-prog-punk-pop-everything-but-the-kitchen-sink rock doesn’t sound like it will appeal to you, Forward Motion Godyssey is definitely worth taking a listen to.