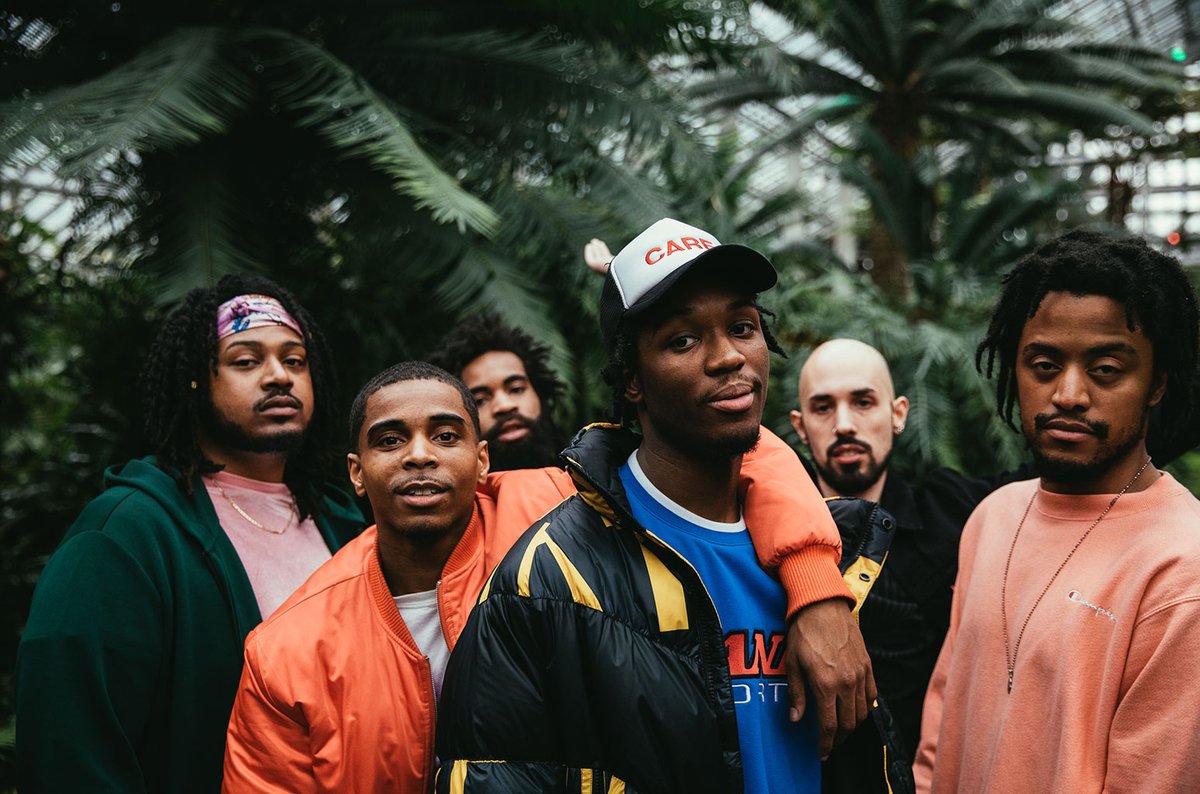 Pivot Gang are as charismatic as can be on You Can’t Sit With Us, a highly digestible hip-hop project that shows a group of friends having the time of their lives.

A real underrated feeling in music is feeling the fun that a group or artist puts into their music. Obviously, this works best with music that is fun by nature – I’m sure bands have fun making funeral doom, but, uh… doesn’t translate well. I was looking forward to seeing what Pivot Gang had up their collective sleeves seeing as Chicago rap luminary Saba is part of them. Forming the rest of this rhyme-happy Voltron are rappers Joseph Chilliams (Saba’s brother), MFnMelo, and Frsh Waters. A collective is only as great as its producers, so rounding out the team behind the boards are daedaePIVOT, squeakPIVOT, and Daoud. With You Can’t Sit With Us, we see the group execute chilled-out Chicago hip-hop that you would be a fool to not take seriously. If you don’t fuck with them, as Joseph Chilliams says, you’re racist.

I’m sure that was said in jest, but it’s representative of the levity found all over the album. Lyrics are heavy on references, wordplay, and metaphors that seem tailor-made to get Genius some more web traffic. This establishes the rappers not as people that walked into the booth intent on setting everything on fire with woke and conscious bars, but as friends who decided to start a cypher in a room while passing a blunt around. Mood and flow are top dog here. If you’ve heard projects from other Chicago-area artists, I’m sure you’re aware of how washy and wavy the production can be, and how lyricists glide over beats so nonchalantly as if it’s effortless. This doesn’t undermine the skill of anyone involved, instead it prefaces the art with an air of relaxation.

All you have to do is listen to album opener “Death Row” which, despite its name, has a laid-back, almost somber tone to it. Being the talented individual Saba is, he spits both a verse and handles hook duty by singing as he does on a number of other songs on the record. MFnMelo and Chilliams join him making reference to everything from Dipset to anti-vaxxer parents to Chris D’Elia‘s cackle-worthy Eminem impression. “Colbert” is more upbeat, but the twinkly production formed by humming keys and warm bass is still like a damn audible bath bomb fizzling in a minimalist jazz lounge at nighttime. Saba drops some playful lines like, ‘Check the news, the black and white, the penguin/I’m just busy chefin’ like I’m Raekwon/Know I got your back like Jake from State Farm‘

“Studio Ground Rules” has a bit of a dichotomy going with it. On one hand, Saba lays the law down for would-be visitors to the studio with language more legally binding than any contract, something that’s taken dead seriously in a lot of circles. The other hand sees him pitching a verse referencing his late cousin John Walt (former member of Pivot Gang), police brutality, and feelings of not belonging. That’s the beauty of Saba that anyone who listened to his last album CARE FOR ME knows well – his ease of swapping topics isn’t the panicked gluing together of disparate things, rather it’s a measured conglomeration of thoughts swirling around in Saba’s mind. Hell, in his life. He’s such a sincere artist and even when making a comparatively lighthearted project with friends, he doesn’t sacrifice any of his artistry at all.

I’ve been focusing a lot on Saba though. Can you blame me? To be honest, I think what I like most about You Can’t Sit With Us is how much of everyone else I liked. One of my favorite songs on here is “Mortal Kombat”. Not only does it have the hardest beat on the album with snappy drums and trunk-rattling bass, but it has a fire verse from Chilliams. A little sample:

‘Droppin’ F-bombs like a guest on Howard Stern
Since *NSYNC broke up, I figured it’s our turn
Gonna hit it from the back like I fucked up a power turn
You havin’ sex, better bring a hat like Kung Lao
You funhouse, steady throwin’ shade like sundials‘

Hey, thanks for shouting out one of my MK mains! The lyrics aren’t going to win any poetry awards, but the way Chilliams flows line after line is catchy beyond description. Guest rapper Kari Faux also shines bright with a confident verse to end the track, calling out ain’t-shit men and staking her claim to the spotlight.

Another certified slapper, “Bad Boys” features a hook from group affiliate Smino (who I’m a fan of) and strong showings from everyone, especially MFnMelo who turns into a low-voiced flow wizard on his verse. Of course, you know everyone had to come out for a posse track, and that’s “Carnival”. Here, we get a head-turning guest verse from Benjamin Earl Turner that ends the whole album. The track is quick – six rappers in three minutes contribute about ten bars each – which makes it repeatable ad nauseam so you can catch everything. It’s a flashy end to an album that’s more low-key than anything else, but more importantly shows that there’s room for everyone to shine on Pivot Gang‘s sonic palate.

It’s pretty clear that Pivot Gang aren’t necessarily trying to be the next A$AP Mob or BROCKHAMPTON. They’re a close group of friends and collaborators that clearly have chemistry and a penchant for music – that speaks louder than any obvious aspirations a group of young artists could have. You Can’t Sit With Us is a lot of fun, but it’s also a great showcase of how powerful the Chicago rap scene is outside of bigger established artists like Chance the Rapper. I’ve already looped the album more times than almost any other hip-hop project this year and that’s a tell-tale sign of a stellar piece of work. Pay attention – whether they want it or not, Pivot Gang are poised for hip-hop dominance.