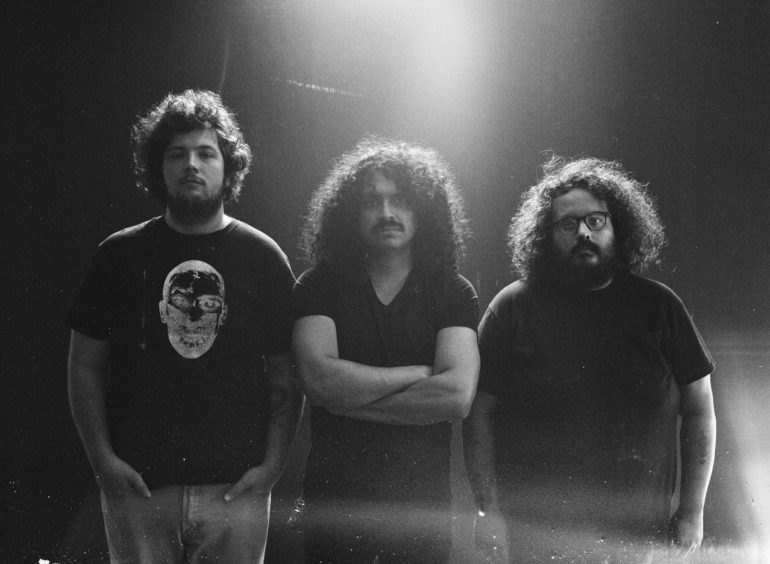 PINKO presents You & You, a love letter to loudness from the three-piece band out of San Antonio, TX. The project combines clarity, volume, and rhythm with a buffet’s worth of riffs.

San Antonio, TX, home of three-piece noise rock group PINKO, is twelve hours away from Albuqurque, NM, where I currently reside. Los Angeles, California is also twelve hours away from Albuquerque. Texas is right next to New Mexico and it’s still twelve hours away. What the fuck? Anyway: formed in 2015, PINKO is like a PA system came to life and was immediately diagnosed with ADHD. Guitarist and vocalist Guillermo Mendez said the band’s ‘original intent was to play loud, noisy, angular stuff.’ Spoiler alert: they succeeded.

You & You opens with title track “You & You”, setting the pace for the album: a mashup of riffs that range from the rhythmic to the rocksteady. The vocals are raspy and distant, almost drowned out by the noise of the band. Every song is loud, the best thing music can be. It sounds like everyone in the band wants to be the loudest; despite that, each instrument comes through clearly. Hearing the twang of the bass emphasizes a song’s rhythm, and “You & You” is an excellent example of this. After the first thirty seconds, the song switches to a swinging 3/4 riff, the bass and guitar mirroring each other. The bass gives the riff a healthy dose of funk; when PINKO drop the drums and half the guitars for a bar, it becomes obvious that the bass is bringing a lot of character to the table.

The transition from “You & You” to “Rats In Reverie” is flawless, the former ending with a hard out and the latter beginning with a quick, clean guitar part that builds to a heavy, chugging rhythm. PINKO produce a gaggle of grooves on You & You. The tracks are exciting and varied – if a section of a song seems too straightforward, they jump to another one quickly. Parts of the album would be at home on a Tony Hawk’s Pro Skater soundtrack. There’s a sense of intensity, but it still feels like everyone in the band is having fun. The drum solo at the end of “Spit On The House” is a good example of this: it’s a repeating beat, not made to show off, but packed with personality and rhythm. That sense of personality and rhythm is present across You & You, and is largely responsible for the project’s fun feeling.

There are a number of people who have practically made a career out of pretending they can’t understand what black people are saying. I find Young Thug as easy to understand as Rivers Cuomo. That said, I don’t listen to a lot of rock music. I like FIDLAR. Am I cool enough for you? For a year in ‘college’ (I never went, but I lived a block away), I lived with some real white people. Like, ride a bicycle across the country white. Ride a bicycle across the country and just sleep at strangers’ houses white. Turbo white. These good folks introduced me to FIDLAR, and now I have punk music credibility or whatever. What I’m trying to say is, I had some difficulty understanding PINKO’s vocalist at times. I don’t think it matters, though.

I am of the galaxy brain opinion that lyrics only matter as much as the artist makes them matter. For instance, Noname depends on her lyrical content because her vocal is always front and center, and if she wasn’t spitting bars her music would be absolute dogshit. You & You’s main appeal comes from the band’s energy and a song’s rhythm rather than a clever lyric or catchy hook. The vocal is low against the band, but the singer’s energy breaks through the noise. It doesn’t lend itself to legibility, but it makes for a better song. A simple ‘One, two, three, four’ on “Road To Exile” sounds just as good as ‘Would you ask me to choke?’ on “Behold Our White Lie”. When people talk about Method Man, they say ‘I would listen to him rap the alphabet’. A similar concept applies here.

PINKO is a great name for a band, and You & You is a densely-packed project, stuffed with switch-ups and riddled with rhythms. Guitars chug like a frat boy, cymbals crash like a drunk frat boy, the bass bounces like a frat boy committing a hit and run. It’s a love letter to loudness with a level of polish that makes it easy to hold your attention. Every instrument is perfectly audible at all times; the vocal sounds loud even though it is quiet. If you’ve ever turned your car stereo up, there’s a good chance you’ll enjoy this project. It’s a testament to the value of volume.