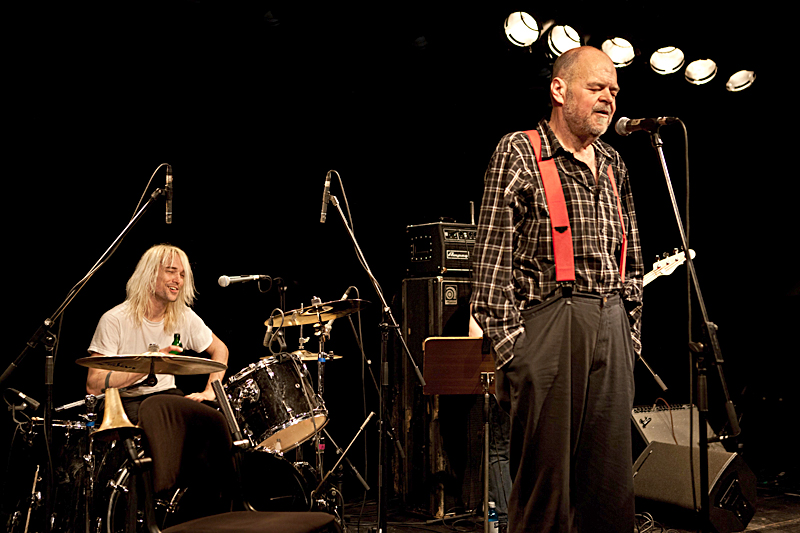 You can take the boys out of the punk scene, but you can’t take punk out of the boys. On The Long Goodbye, Pere Ubu sound even weirder than on their previous records, challenging even more the lazy avant-garde and post-punk labels. Fortunately.

It’s hard to dissociate Pere Ubu from punk, considering that lead singer David Thomas was in Rocket From The Tombs, the same band whose parting members went on to form the infamous and notorious Dead Boys. Not that Thomas is, or has ever been, anything like Stiv Bators; where Dead Boys were pure chaos and straight to the point, Pere Ubu were all about contention and building ambience. That’s certainly something that hasn’t changed, and on the new The Long Goodbye, it is even more pronounced. In fact, the band is now more cinematic than ever, something that is reflected not only in the spooky synthesizer sounds but also the lyrics and the way Thomas sings. While some songs like “The Road Ahead” could easily belong to a lost 80s trashploitation flick, others make for a more distorted and dissonant Pere Ubu experience.

The Long Goodbye is nothing like the band’s previous release 20 Years In A Montana Missile Silo, mostly because it sounds exactly like what it is intended to represent: the end of the road. As Thomas himself puts it about their journey to Satisfied City: ‘This wraps up every song and story that Pere Ubu has been telling in different ways for the past forty plus years.‘ While that is definitely true lyrics-wise, there’s a feeling of closure embedded in the music as well. The heavy usage of synths makes the band sound more investigational, like a renegaded grandfather of Liars and a spookier (if possible) stepbrother of The Fall.

If Pere Ubu’s goal was to become even harder to classify, they categorically succeeded. The Long Goodbye – a title borrowed from a Raymond Chandler novel –  goes beyond what any fusion of electronica and rock music could suggest. Labels like avant-garde and post-punk that might encompass everything and the kitchen sink these days, seem even more nonsensical this time around, some 40 years on.

The strange thing with the record is not that it sounds weird. Pere Ubu always did, and that’s why they are so beloved (and probably sell so few records). What’s truly bizarre is that, despite Thomas’s opinion of the group that they’re not a very good pop band, some bits are unbelievably catchy and stick to the ear like wax. One distracted listen of “Road is a Preacher” is enough to have Thomas moaning about getting a witness in your head for the rest of the day. The same happens with the eerie crooner that is “The World As We Can Know It” and its repeating chorus of ‘The more I know/the less I see‘.

This is not the end of Pere Ubu. It is just the end of the road for this version of the band. As it has been standard practice for the band, it’s time for a reinvention of their music and members. That’s why each song on The Long Goodbye offers a resolution on the past work of the group. Unlike what they sang in 1985, this is more of a cure than a final solution. But hey, David Thomas doesn’t care about our feelings anyway, so he’ll go on doing what he wants. And that’s the way it should be.