By Shaun MilliganSeptember 4, 2019 No Comments

With heavy hits of groove and gloom, Eschatology is a delicious slab of spacey, stoner rock – painting a vivid portrayal of the disaster-fuelled end of humanity, but certainly not of Pale Grey Lore’s career.

Eschatology is the element of a belief system concerned with humankind’s ultimate destiny. Be it glorious rapture, rampant destruction, or otherwise, you and I know it more commonly as the end of the world. For Columbus quartet Pale Grey Lore, their particular Eschatology is a triumphant first effort since signing to Small Stone Records, and a thoroughly gratifying follow-up to 2016’s equally enjoyable self-titled album.

In the interest of those not familiar with the band’s work, allow me to try and summarise their sophomore outing’s sound and character: imagine that Queen’s of the Stone Age, All Them Witches, Wolfmother, and Lo-Pan all sat down around the tiring embers of a campfire and – presumably having partaken in a number of beverages – got to talking about the fate of the world. Eschatology, all 42 minutes of it, is the result of that dimly incandescent discussion.

According to the band, Eschatology tells of ‘a depleted planet beset by vast inequality, ravaged by climate catastrophe, and poisoned by nuclear disaster‘, which certainly sounds like suitable doom fodder. Explaining further, we hear that humanity’s vast majority ‘are left to suffer and die while the wealthy techno-industrialists responsible for the destruction flee…‘ Without spoiling too much, expect a tapestry packed with cosmic beings, warped realities, and worlds rendered part wasteland, part untamed paradise (scattered with towering structures of untold power, no less). It’s high concept turned up to 11, and Pale Grey Lore execute it brilliantly in conjunction with the music.

Across the ten tracks, you’ll hear distinctly different examples of what makes the band’s music so memorable and easy on the ears. The songwriting builds on their debut from three years ago, giving it a touch more vigour and fuzz, without losing the all-important hooks and harmonies that keep the listener tuned in to a troubling tale contradicted by its occasionally chipper tones.

Eschatology playfully bounds between pinches of desert, doom, and psych, though it does so comfortably in the shoes of stoner rock. Despite such energetic frolics among genres, the record as a whole is a (positively) meandering listen. The long, simmering introduction of “Sunken Cities” builds suitable anticipation from the get-go, before a filthy bass tone interrupts, shrugging off any misguided sense of softness or safety. “Greed Springs Eternal” sports the QOTSA vibe well, with the opening bars of later track “The Rift” also fondly reminiscent of nod-inducing classic “You Think I Ain’t Worth A Dollar, But I Feel Like A Millionaire”. 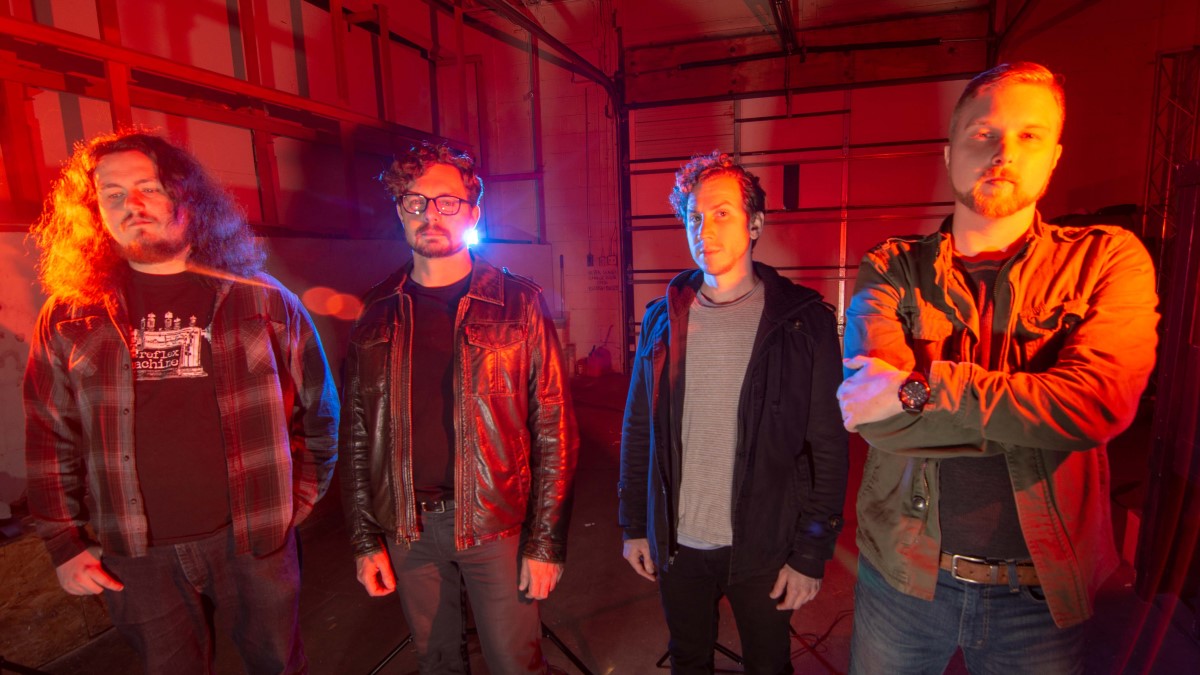 Minor chords and scales add to the melancholic whimsy, particularly ingrained in the lead melodies – all in keeping with Eschatology‘s themes. Like the audiobook of a morbid dystopian diary, “Waiting for the Dawn” summons pictures of a long, arduous night; elsewhere, tracks carry a deathly and very tangible unease, such as in the crushing tones of “Before the Fall” and “Void-Cursed”. The riffs are always at the very heart of it, capturing the album’s essence as richly as the lyrics. Confident vocal delivery and subtle harmony are not to be overlooked, along with colossal bass and drums that team up to form a sturdy backbone for the majority of Eschatology.

Sporadic relief from such hardy noise comes courtesy of the band’s more unusual compositional choices – anybody up for a theremin or mellotron? A whiff of Wolfmother arises on “Regicide”, as well as in some wider elements of the album’s mixing and vocal styles found on the likes of “Undermined”. There’s also enough fanciful fretwork to prevent Eschatology from becoming boring. We’re not talking out-and-out shredding, but Pale Grey Lore offer plenty of tasteful licks that soar above the crushing chords deep below. Effects are used minimally, primarily to enhance the vocals and flesh out dynamics in a way that reaches for the cosmos. Such ethereal additions accompany Eschatology‘s sound confidently, expanding its breadth in the punchier moments, increasing the weight of its mystery in the quieter.

Eschatology is a thundering good time from smouldering start to the winding end of the closing title track. Equal parts colour and clout, the vibrancy of the guitar flourishes, with the vast musical textures being matched in the album’s cover (an element of artistic work I find to be often brushed over these days). A colourful but bleak snapshot of the aftermath of a civilisation’s downfall, the mystery of the artwork captured my interest. The music all but held it hostage. What lies beyond the doorway of that cryptic tower? Pre-order Eschatology, then venture in for yourself to find out once the album drops September 6.