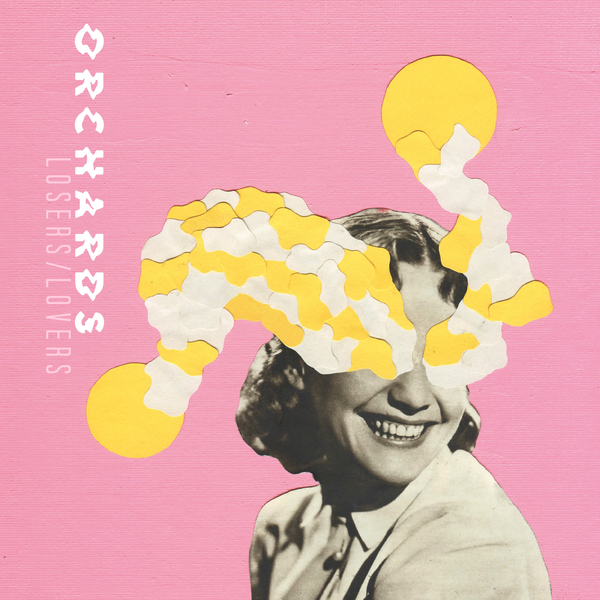 For a twinkly math-pop band that is heavier on the pop, check out Orchards’ Losers/Lovers.  It’s happy, it’s twee, and it’s just on the edge of sickly – but this album length EP’s great highlights make it well worth the listen.

This is some pretty good math-pop.  The guitars chime, and when not heavily effected as on “Double Vision” or “Honey”, have a habit of ascending and descending scales in a classic mathy style, as on “Peggy”.  These are riffs you have likely heard before, but, unusually for an album in genres with the prefix ‘math’, they are combined with both great production and great vocals.  The female lead singer’s voice is agile, delicate, and clear, even if it at times fails to change in tone and force with the emotional movements of the instrumentals.

I am also tempted to say that it is, in places, super catchy.  “Luv U 2”, “Drama King”, “Honey”, “Darling”, and pretty much every other song on the album has an identifiable hook.  There are two caveats, though.  I am not certain that each hook is particularly strong on its own, and rather gains its catchiness from repetition.  Some of them, at least, sound like pre-chorus lead-ins to a better hook, but which do not have a better hook to lead in to, and thus rely on their being repeated to stick into your brain.  Secondly, many hooks seems a bit ‘by numbers’, and not in the sense that is good for mathy music.  The cadences are perfect, it is all a bit major, and is potentially deserving of the term ‘generic’.  Some songs escape these criticisms – “Honey”, and the end of “Drama King”, for example, are songs that suggest that this band have a fair career in front of them.

The real problem here is that nothing surprising happens.  Hence the claim that this is heavier on the pop than the math – Orchards do not take any risks.  The most out-there elements of the album being some electronic ticks added to “Age of You” and the particularly exciting bass line in “Darling”.  I might also add the deviation from a verse-chorus structure in “Drama King”, although that’s a ‘risk’ that does not pay off – I would rather the song got to the point slightly with more haste.

These examples are not of anything particularly experimental.  And so, whilst the album is certainly good, and each song is enjoyable, there is not much to differentiate each song from the others, and there is not much to help you to remember the album as a whole.  It has a (not particularly unique) sound that it pulls off well, but does not do a whole lot else.  It is worth listening to, and it shows that the band, with some variation in writing, and with the inclusion of more variation in the vocals, should be able to go on to do great things. It’s probably a good thing, though, that this, that is effectively an album, was labelled an EP – the harsher evaluations an album receive wouldn’t have reflected on the band all too well.