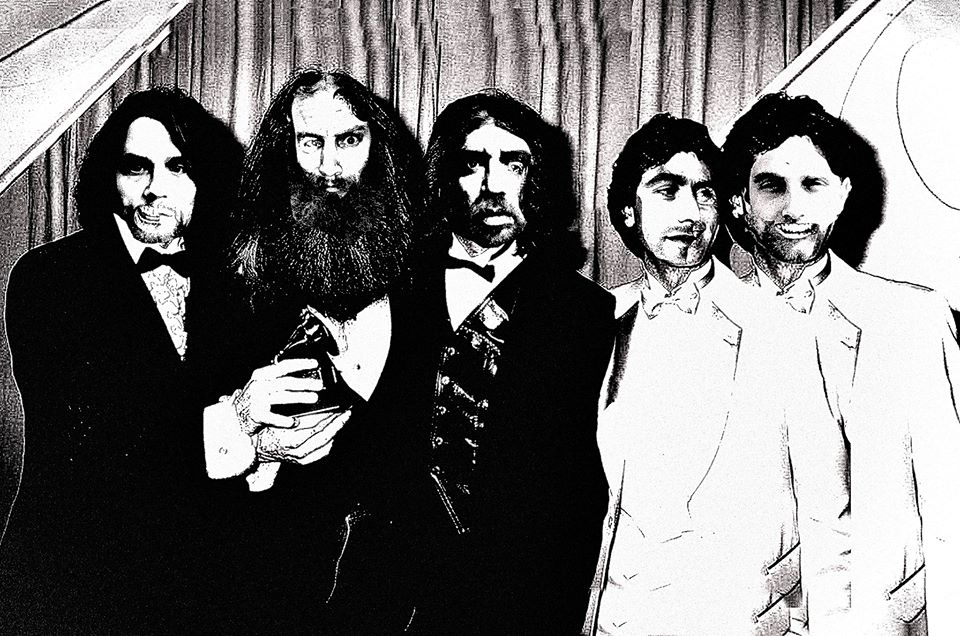 Old Man Gloom, in a show of mercy, piecemealed their two latest albums to us. Because of that, their dense sludge metal hits harder and stays with you longer.

Well…what have I gotten myself into?

In all the workhorsing I’ve done here at Everything Is Noise, I don’t think I’ve ever reviewed two albums at once like this, especially from the same artist. Granted, not everyone is wild enough to drop two full-lengths within a couple months of each other. Enter Old Man Gloom, sludge metal’s jesters of the court, to summon a deluge of music to knock us off our feet. Some lore from the band back in March:

‘As we’re all locked down, and uncertain about what will shake out of all this bonkers shit, we at Old Man Gloom have decided to reverse Gloom you all. What is a reverse Gloom? Well, it’s pretty simple. Instead of playing a trick on everyone, we’re going to play a trick on ourselves, and unfortunately for Profound Lore, our record label.‘

The original plan – the lead-up to which had 100% more bamboozling – was to announce and release Seminar VIII: Light of Meaning for the near future (May 22), then drop Seminar IX: Darkness of Being a week before that with no big pomp. This is the part of the story where I imagine a butt rock theme song plays and coronavirus marches toward the wrestling ring with unmatched machismo to suplex OMG‘s plans into a wooden folding table before winning by submission. The boys decided to just throw Seminar IX out really early on March 23 to lighten everyone’s time as the world literally changed before our eyes.

This will inevitably be a weird review because not only have I had a lot more time to sit with Seminar IX, but I also have to reconcile it with the recently released Seminar VIII. Are they similar? Different? Does any of this make sense? Does any of it matter?

So, Seminar IX: Darkness of Being. It’s OMG‘s first album since 2014’s The Ape of God, which was an…interesting release. Anyway, you get a real tight interpretation of post-metaly sludge here, as expected, but there’s a lot of variance that keeps things moving and entertaining, especially as we consider Seminar VIII later. To my knowledge, no single was released from this album, so that meant diving in raw with “Procession of the Wounded” and trying to stay afloat. It carries an air of dissonance even though it maintains neat, if battering melodic lines in the foreground throughout its short-ish runtime of 4:06. To me, it’s the tenderizer – a way to soften you up for the coming storm.

OMG are known for causing quite a racket, and it’s with “Heel to Toe” where it starts. Piercing feedback, muted fuzz and static to imply a great disruption at the beginning and end, and loud singing. Once the song kicks off and gets in its groove – and it’s a hell of a groove – it almost feels like a stoner rock song. Want more? “In Your Name” is where you need to be. More great groove and driving heaviness that inspires a lot of sing-along parts, especially during the chorus. It’s monolithic and quite catchy for being over twelve minutes long.

The other long-form song here, “Canto De Santos”, likely named for (by?) drummer Santos Montano, is also a real force. A slow build-up with haphazard instrumentation culminates in a metal eruption that’s the heaviest stuff on offer with Seminar IX. The most interesting stuff, though, barely registers on the Richter scale. “Death Rhymes” is sullen and melancholy, carried by mostly acoustic guitar and Steve Brodsky’s unique voice. Given the band’s circumstances, something I’ll get into next, the lyrics are especially cutting:

To me, these albums function as a side of a coin which houses Cave In‘s last album, Final Transmission, on its other side. It was a beautiful send-off to member Caleb Scofield who tragically died in 2018. These seminars both feature what is likely Scofield’s final bass and vocal contributions for OMG, and are monuments dedicated to his life. While this band and Cave In are pretty far apart in sonic execution, they both always seem to find room for touching tribute in their own way.

That’s Seminar IX in a nutshell – a great, big slab of sludge; OMG doing what they do best while packing in some nice asides. 48 minutes well spent…but we have another 45 minutes to examine here with Seminar VIII: Light of Meaning. It definitely trends heavier and utilizes a bit more atmosphere to give it a claustrophobic and cavernous feel. It’s also a more cohesive package and moves along a bit quicker as a result.

Although both albums tread through similar waters, they have a pretty clear dichotomy between them. Seminar VIII just hits harder in a more literal sense. Where IX would be more diverse with its emotional palette, VIII digs in with the heaviness. “EMF”, the only pre-release single for either album, starts us off, waking it from slumber with a eerie croaking that’s supplanted with dense guitars and lashed drums. Real wicked-sounding stuff. OMG‘s penchant for noise and aural clutter pops up again in “Wrath of the Weary”, which is a doomed slog with absolutely depraved vocals.

“Final Defeat” is probably my favorite song across both albums. The instrumentation is ironclad, but the clean vocals from Brodsky really elevate the piece into something awesome. Another twelve minutes well spent by the time the track devolves into a feral, frothing mess of discordance. “By Love All is Healed”, the final track, is interesting, as it progresses to a point where it sounds very familiar. At the midpoint, you hear the same melody present back in Seminar IX‘s first song, “Procession of the Wounded”…or perhaps I should say forward. After all, the sequencing of these two album implies that this one comes first, which would mean if you spliced the two together, “By Love All is Healed” bleeds into “Procession of the Wounded” and uses the same riff as a significant backbone. Not entirely subtle or groundbreaking, but a neat way to tie the two records together.

Both seminars are indeed complementary. I have a clear favorite, and that’s VIII, but IX is no slouch either. I think what ultimately made my enjoyment of both albums better than it otherwise would have been was the two-month separation of them. I digested and processed IX back in March, and late May offered me a second helping with a tweaked recipe in VIII. Unless you’re keen on overindulging with both albums back-to-back, I’d recommend taking it slow – believe me, there is such a thing as too much of something good.

There’s a certain irony in the album subtitled Darkness of Being having lighter tones to it, and Light of Meaning being darker. No matter – these are both great additions to Old Man Gloom‘s growing infernal legacy, and sizable distractions from our own torment. Everyone’s on point, there’s not much wasted opportunity, and with over 90 minutes of music, that’s honestly a huge achievement. Check them out, but, uh…maybe space them apart a bit as I have.

Oh, and do follow the band on Facebook; they’re one of the funniest bands on the platform.