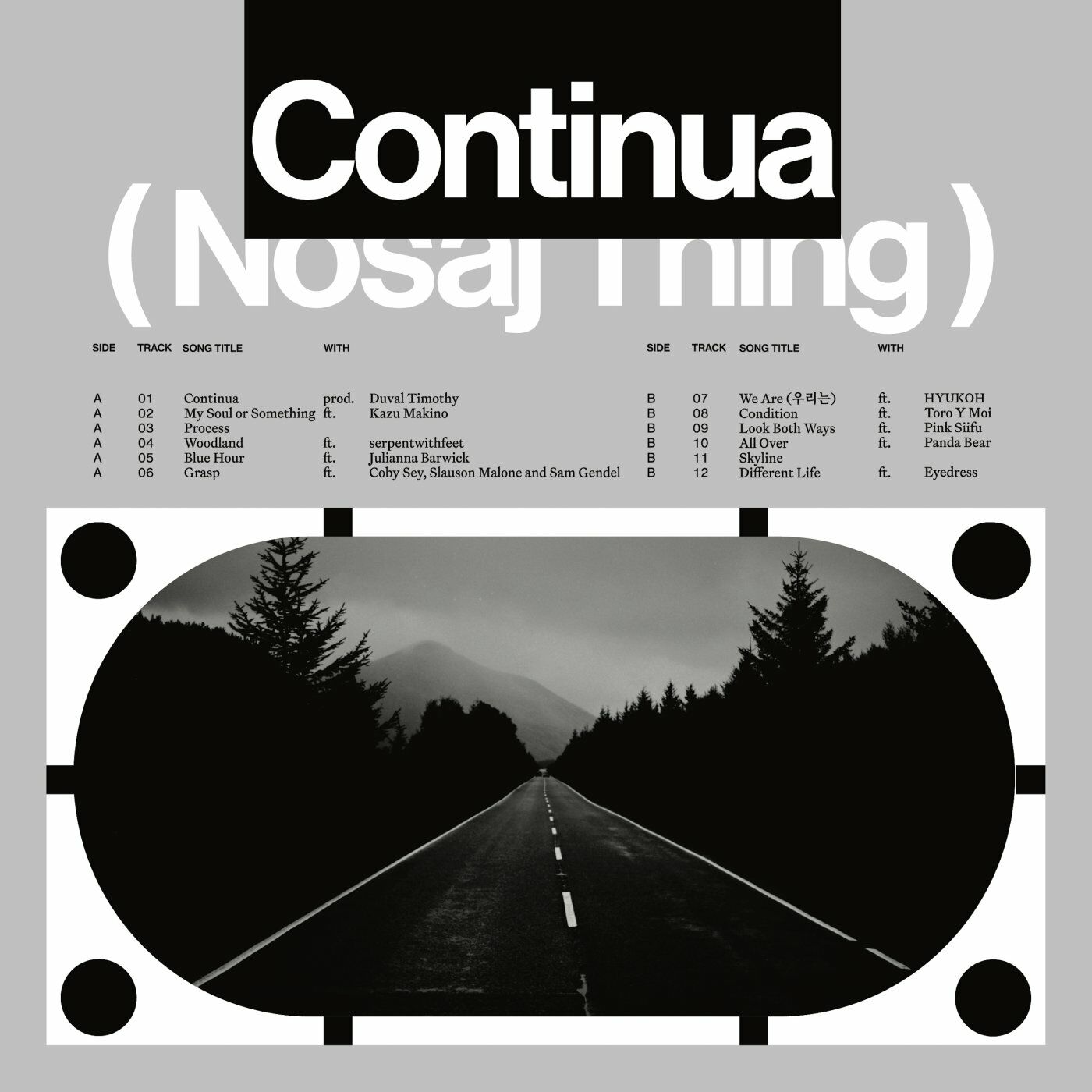 By Dominik BöhmerNovember 28, 2022 No Comments

Roping in an impressive supporting cast for Continua, Nosaj Thing has put together a surprising and satisfying slab of moody electronica.

An empty road in the Scottish highlands, black and white. This photograph by acclaimed music photographer Eddie Otchere isn’t just the first thing a listener would see upon interacting with Continua, the fifth album by Los Angeles electronic music producer Jason W. Chung aka Nosaj Thing – it’s the very thing that inspired Chung during the drawn-out act of creation:

‘This is the first time I worked backwards. I made a mood board and chose the photo on the record cover before finishing the record. All the collaborators on the record, I would send them a folder of demos along with the photo just so they could kind of see the world of this record.’

Having been active under the Nosaj Thing moniker since 2006, Chung made a name for himself not only through his own (largely instrumental – this’ll become a bit more important in a second) releases, but also through his production credits for other artists, including Kid Cudi, Chance the Rapper, and Kendrick Lamar. This obvious affinity for hip hop has always colored his particular blend of various electronic music styles; there are always hints of jazz, wave, and r&b present on his records, too. Continua is his pandemic record, and an answer to the question of what his final album might sound like. Surprisingly, it turned out to be quite the collaborative effort.

Indeed, this album has an impressive number of guest spots, from household names like Kazu Makino (of Blonde Redhead fame), Animal Collective member Panda Bear, or chillwave progenitor Toro Y Moi to aspiring artists like Duval Timothy. Continua, as a result, is the most vocal-driven piece of work among the Nosaj Thing discography. Giving his collaborators quasi-free reign (‘I gave each artist about four or five ideas and let them choose which one they gravitated towards’), Chung acted more like a movie director, pulling the strings in the background and deciding on the final sequence of things. In the following, I would like to point out three of my favorite tracks to arise from this method.

“Woodland”, featuring the inimitable serpentwithfeet, starts off with an almost eerie drone, before breaking out into a left-field r&b track with a spacious beat and smooth vocals. The lyrics are (purposefully?) vague, as they could be addressed to both a lover or a magnanimous spiritual entity without losing any of their impact or mystique (‘Oh woodland, rife with desire/ Show me your hand/ Make use of my fire’). I’m simply enchanted by serpentwithfeet’s vocal performance – I mean, what else is new; the man’s voice is phenomenal – and the way Chung treats it with effects at certain points of the song is interesting to witness, like someone tinkering with precious stones and instruments.

A name I always love to see pop up is Julianna Barwick’s. The ambient music singer/composer’s work has secured her a spot on my regular rotation, so hearing her on other people’s projects is always a pleasant surprise. She quests on track number 5, “Blue Hour”, a wistful piece that pairs her ethereal vocals with minimalistic synths, bass drones, and a steady beat. It’s not rocket science; the set-up is quite simplistic, but the effect is still breathtaking. Nosaj Thing has previously produced a song on Barwick’s latest album, 2020’s Healing Is A Miracle, and this new song proves that they complement each other very well when working together.

Now here’s a group of people I never would’ve expected to appear on the same track: Sam Gendel, experimental jazz saxophonist, genre-bending producer Slauson Malone, and vocalist Coby Sey, who has made waves with releases such as this year’s Conduit. These three, apparently put on the same Nosaj Thing track by the hands of fate themselves (in the interview I quoted earlier, Chung described how they seemingly gravitated towards the same song in an unusual combination of events), have a lot of chemistry, so “Grasp” becomes an instant highlight. Floaty ambiance, bubbly bass, and laid-back sax underpin Sey’s chill but emotional vocal performance; one can’t help but let themselves fall into the sheer vibes.

Continua is a focused effort from Chung and his supporting cast, moody and atmospheric in nature, simultaneously tight and free-flowing. The songs engage like gears in an engine’s transmission, yet there’s a sense of singularity to all of them. I suspect this is mostly thanks to the diverse set of guests, as they naturally bring in various unique flavors to bring out the best in Nosaj Thing’s special recipe; undervaluing Chung’s own hand in orchestrating and curating this assortment of talent would be foolish, though. He provided them the sounds and context they all drew from, after all. It’s clear that a firm vision has been established before starting to work on this album, and it paid off tremendously – Continua is an impressive and satisfying piece of electronic music, perhaps among the best of Chung’s career.