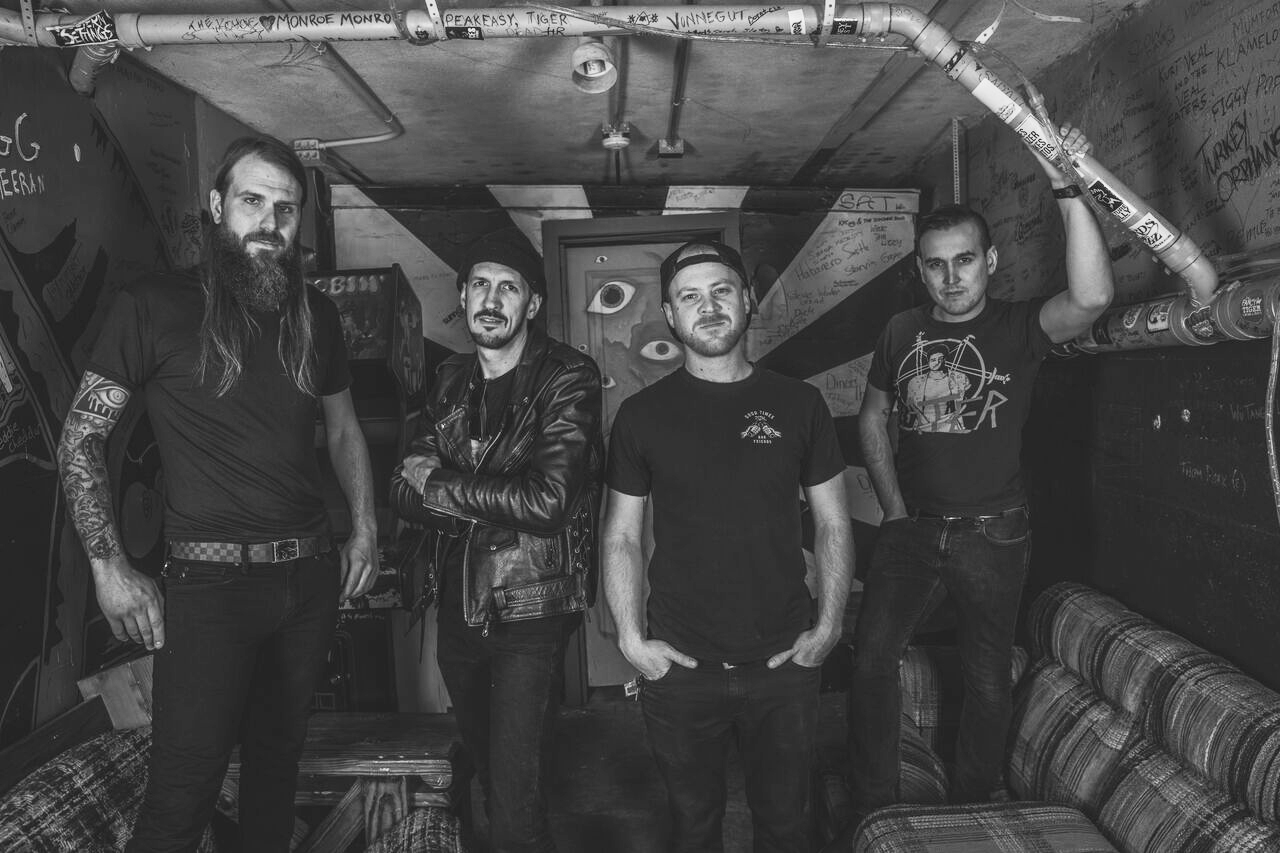 By David RodriguezNovember 14, 2019 No Comments

Using the film Logan’s Run as a base, Necropanther crash into some heavy dystopian topics with a fun, thrashy death metal perspective.

Death-charged thrash metal from Denver? Hell yeah. That’s an easy sell, but it’s the music that should really do the talking, right? Well, that deserves a hell yeah too, but like, one that’s disheveled and jaded from years of gradual social and political degradation. The times we live in make it quite easy for bands like Necropanther to write dystopian music, but that kind of music isn’t exclusive to this millennium – in fact, I think you’ll find all over pop culture’s history that we’ve had a fascination with the end of all things, or purgatory-esque times that balance on the edge of a knife with decay and authoritarian vibes.

You know, like the 1970s, when many a sci-fi/post-apocalyptic film was coming out. The Doomed City is actually based on the 1976 film Logan’s Run. Based on a novel of the same name, the film takes place in a perceived utopian society where every hedonistic whim could seemingly be acted upon with no recourse. The catch, and catalyst for the drama, is that you’re forced to ‘renew’ (read: die in a religious ceremony that promises rebirth) when you turn 30. If you don’t want to, well… you die anyway. There are awesome references and Easter eggs throughout this album to Logan’s Run, so if you’re familiar with the film, or even the novel, your enjoyment of it should rise exponentially. Then again, I wasn’t familiar with it outside of the basic premise until this album and I enjoyed it. Unrelated: shout out to Wikipedia and IMDB.

This isn’t the first time Necropanther have committed entire bodies of work to film or literary influence: Their self-titled debut album is rife with The Terminator references, second LP Eyes of Blue Light is an homage to the Dune universe, etc. Metal, especially that of a more extreme and technical variety, is perhaps the best way to express these types of bloodied science-fiction themes in the fast-paced and brutal environment they were born into. Logan’s Run though? A little different! It’s not as visceral as something like The Terminator – Logan’s Run, while having its share of action, is more about questioning the status quo, liberation, rebelling against an authoritarian system. Also perfect for metal.

And metal it is! Melodic and fierce, The Doomed City wastes no time getting to the issues at hand: riffs. “Renew” burns hard and fast out of the gate with flashy guitar work, double-bass drum pummels, and a rumbly bass tone that you hear all around thrash’s most revered modern output. The little flecks of bone that fly around and get in your hair while listening comes from a distinct death metal influence. These days, it’s hardly ever enough to do one genre well – bands like Necropanther take a couple and jam them together like a metal Megazord or Voltron.

The vocals are two-toned, half sounding like their neighbors in necro, Nekrogoblikon, sans the over-the-top parody effect, the other a guttural belch as deep as the rift between the sheltered dome city in Logan’s Run and certain freedom. This dual vocal approach allows for some interesting dynamics. While the instrumentation engages in a playful pomp like on “Arcade”, the lyrics get textured in a way that accents the story being told, sometimes even calling for a layering that provides the best of both worlds.

This attitude of controlled chaos lends itself well to the Logan’s Run theme. I’m sure there weren’t many death growls in the script of the movie, but plots points like enforced death, a looming iron-fisted government, and killer police that keep people in line – all kind of beg to come to life in metal nightmare of catchiness and, dare I say, fun. And it is fun to listen to The Doomed City for the stuff it explores. Necropanther are well-seasoned at this point, carving out a place for themselves in Denver’s impressively swelling metal scene, so they’ve got a good grip of confidence on the bulletpoints they want to hit and the boxes to be checked, though don’t read that as being by-the-number or manufactured. This isn’t music with any intention except to express the ideas that the musicians wish for it to, independently and free of any influence. It’s music that truly speaks for itself – a hair windmilling hell of a time that’s as digestible as it is defiant.

The Doomed City is just about everything a good metal album should be. Punchy, purposeful, and pitiless. The world has not, and will not, give us any quarter, nor should we expect it to – music tapping into this notion should follow suit. Necropanther are great writers, able to astutely execute on a concept without losing any individuality or ‘spin’ to it. If you like fast-ass riffs, highly imitable growly vocals, and fun melodic lines, you’ll love this album.