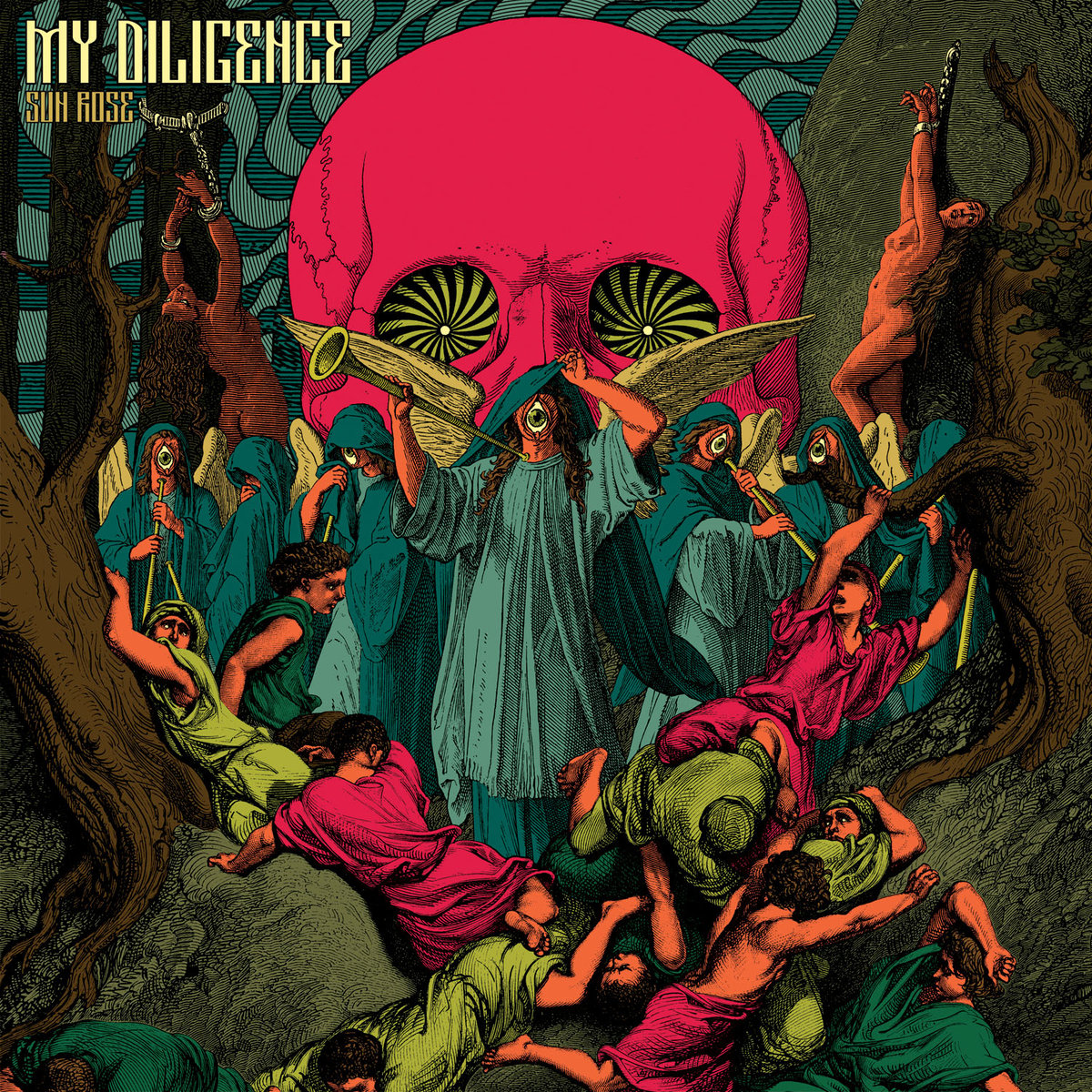 By David RodriguezFebruary 23, 2019 No Comments

My Diligence is as adrenal as it is catchy. Their brand of desert rock will carry you with infectious energy, so put on some sandproof goggles and dive in.

Whew, that was close! My Diligence may sound like an angsty emo band’s name, but nope! Belgian stoner/desert rock. Not that there’s anything wrong with angsty emo, but the kind of dirt this trio kick up is way more my speed. As such, I also have a more discerning eye (and ear) when it comes to separating the good from the great. With Sun Rose, I’m happy to report that My Diligence was quite diligent in making a groovy and heavy stoner rock album with a lot of forward momentum to ride.

I feel like music of this ilk can get a bad rep because it comes off as relatively one-note, only servicing a particular sect of music fan. The stereotypes live in infamy, but like all other music literally ever, digging deep enough between the cushions will reveal some gems and it appears My Diligence are a cut above the rest. The thing that sets them apart is a progressive tendency stitching together its weathered, rough and tumble leather. Plus, no matter how you cut it, Sun Rose is a delectable album made for visceral enjoyment. ‘Rest in peace’ in advance to your friends’ necks if you get the AUX cord during a carpool or road trip and play this.

“Lecter’s Song” and “Unreal” are rolling tracks that embody these principles the most. While Sun Rose sits pretty at mid-high tempo throughout, these two songs are punk-infused, kinetic anthems with a lot of fuel to burn. The drums are ceaseless, the guitars have a layer of grit to them, and the soaring vocals are a little washed out, which gives them some character. It’s a recipe for a digestible and friendly experience, if you want to keep your energy high.

If you’re like me, you came for the riffs. And boy, are they plentiful. The riff during the verse of the vengeful “Backstabber” is quite simple, but very effective. The guitars are so robust with a good rumble to them. For stoner fans that tread more toward the doom side of things, it’s not quite that abyssal or fuzzy, but remarkably heavy for the tone of the music. “So Pretty So Cruel” is as well. It’s a slower affair than other tracks on here, but those climbing guitars emboldened by bass are galactic in size. Even with a more conventional song structure, it rocks you in half and keeps the album flowing all the way to its end.

My Diligence don’t keep things too by-the-book for long, and that’s most evident in “An Asteroidal Arrow”. It’s a bloomer of an atmospheric track, forming a slow build with husky drums and spacey guitars. You don’t even hear vocals until the last minute of the track’s triumphant finish, where all instruments are full-bore into your ear canal, eliciting a slight head bob with grimy groove. I’d be remiss for not mentioning “Resentful”, too, the album’s opening track. It has a gentle, constant groove to it. The vocals croon to you in a way that isn’t very common on the rest of the record. Even still, the overall tone is massive, acting as the dusty welcome mat into Sun Rose.

This all leads to an observation I made with the album. Sometimes, it almost sounds like it was written and performed by a couple different bands. The various tones and sounds on here are similar enough so as not to be disjointed, but different enough to warrant a mention. The vocals are probably the biggest binder here, though even those sound different at times. In the first three tracks alone, it’s almost like listening to a compilation of bands throw their hat in the stoner ring. This might be because these songs were written over a wide range of time and thus sound different, but that’s simple speculation; it happens with bands often though. Perhaps a bit more cohesion might have suited the overall package better, but since I like everything I heard on this album, I can’t rightfully hold it against the band too much.

No matter the case, Sun Rose is a fun, catchy album with a lot of ground to cover in its perfect runtime. This is the kind of stuff you need to listen to while blazing down a dirt road with the top down (and maybe something else blazing if you’re the type). It’s built to keep the energy going high and fast in an endearing way. Give My Diligence some of your time and it’s sure to put a crick in your neck and a riff in your brain for days.