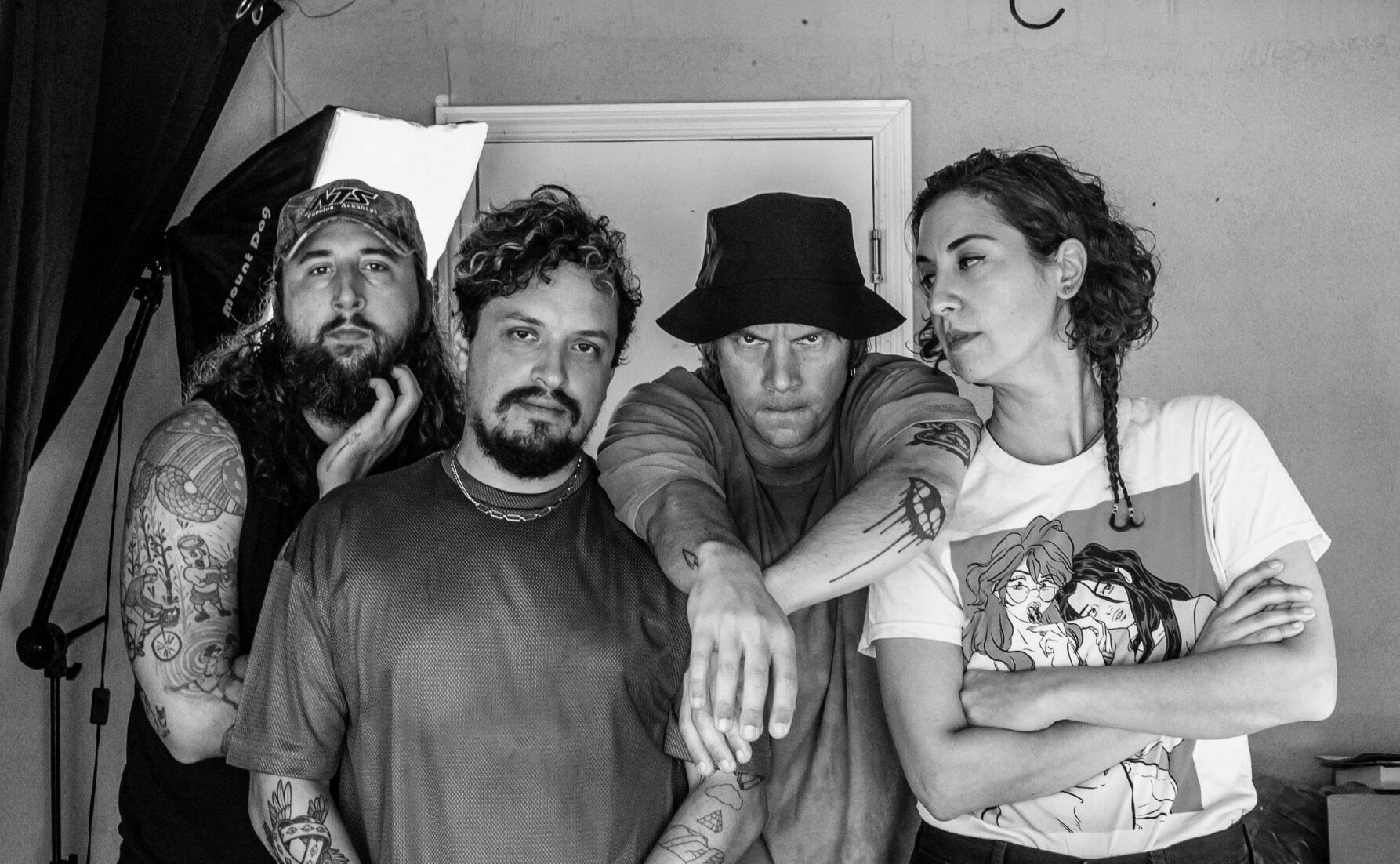 By David RodriguezDecember 16, 2022 No Comments

With a blitz of an EP that will start a new journey for the undefinable LA rock band, Melted Bodies continue charting new territory with almost no regard to safety or ease.

Melted Bodies‘ return was foreseen, inevitable even. There’s no way a band like this could not put together new material and spin the fucking block with another helping of acerbic, wily, exciting, and ultimately compassionate music. I think I was so touch-starved for something truly unique and great by the time Enjoy Yourself came out that I latched onto it hard, like a starving baby to a nipple, and have since run the numbers up on Spotify and now Tidal as I awaited their next offering.

The Inevitable Fork is evocative as a title – what fork? Is it truly inevitable? What of free will? This installment has a Vol. 1 at the end because it’s the first of three that, when eventually combined, will form a whole new album. I’m usually not into this format of releases – just fucking drop the whole thing at once even if it’s later – but, the fiend I am, graciously accept what I can get from someone as weirdly astute as this LA quartet. There’s an exception to every rule, right? Melted Bodies does it and I’m like ‘yes, daddy.‘

Still, let’s take our fanboy caps off a bit, even if there’s a smaller one hiding underneath it like a matryoshka doll. We cannot and will not definitively come to a deep, final conclusion about the body of work that is The Inevitable Fork, Vol. 1, because it’s not complete. This will be, just as the album is, the first in a trilogy of works that we’ll come back around on at the end and conclude in some way. I can’t promise it’ll be good – I’m not James Cameron.

So, this is an EP, four tracks only, but a pretty hefty runtime for the band at just over 22 minutes. Despite my previous caveats, this is a project with enough flesh to warrant discussion and dissection. The Inevitable Fork, Vol. 1 is sonic madness, just as Enjoy Yourself was. The difference here is more liberties taken with genre and style crossover. There’s more of a synthetic backbone here – their debut album was synthed-up and used electronics to punctuate songs with a maddening Cheshire grin, sure, but this leans into it more. Every song seemingly lays on a bed of wires and knobs, whirling synths building foundational melodies to entire song sections like in “Think Safe”, which feels like the band’s take on post-punk. Lyrics often soar above these vaguely industrial rhythms, and the chorus is a dead ringer for Depeche Mode if they got zooted on mescaline and dropped off in a Tanz Metal club in Germany.

I won’t lie, I’m not too wild about the effects on much of the vocals, modulated enough and in such a way to make clarity an issue (it was on Enjoy Yourself too, though it’s more grating here and therefore warrants mention). It’s a choice, one I’m certain wasn’t made lightly by Melted Bodies, who seem to have a very tight grip on the whole of their art and presentation, it’s just not my favorite. It’s mostly forgiven, though, when you factor in the unhinged delivery married with the lyrics themselves which makes it sound like they’re delivered by patients that usurped their asylum and its PA system. Take “Therapy” for example – it’s about therapy, but the execution is so wildly aggressive and antagonistic toward the whole idea, focusing on how ridiculous it is that you have to pay someone to talk to you about yourself and your problems. Melted Bodies are never ones to take the easy way out.

‘SSRI
Blame dad and mom
Time to consider treatment
What’s the cost, I said what’s the cost?
…
I got therapy, it starts at 3:00
I gotta pay someone to talk to me
About life and love and things and such
I gotta pay the bucks to bitch and fuss‘

This whole EP churns with unease and an almost cartoonish sense of dread, like it was directed by Jhonen Vasquez in his prime. The title track is perhaps the best at capturing this, just rollicking in abject tension that ebbs and flows, musing on mundanity and ceaseless search for hits of serotonin and purpose. Melted Bodies always feels relatable on many levels because they don’t cloister feelings away or sugarcoat them; rather they express them through biting sarcasm, smoldering guitars, and volatile rhythms, which is really how we feel. We see them and we feel seen by them. It builds a sense of unity in the weirdest way possible – still counts.

The more I think about it, the more I liken Melted Bodies‘ creative whole to body horror-prone AI-generated art. Not to say that they devalue the medium like AI art tends to, just that it contorts and buries a reality we know and acknowledge is there with key differences, be it algorithmic glitch or artistic freedom, that jettison you to uncanny valley even if you ultimately like what you see/hear. For proof, look no further than the visual art that accompanies their work – wet, sticky, vaguely unidentifiable. So far, the first volume of The Inevitable Fork accentuates what they established with their trailblazing and unfuckwithable debut album, and that’s as good a position for any artist to be in. I have zero doubt that trend will continue with subsequent parts. The only question I have is what form will it take as it stomps on the welcome mat of my apartment door? Whatever it is, just wipe your feet please.