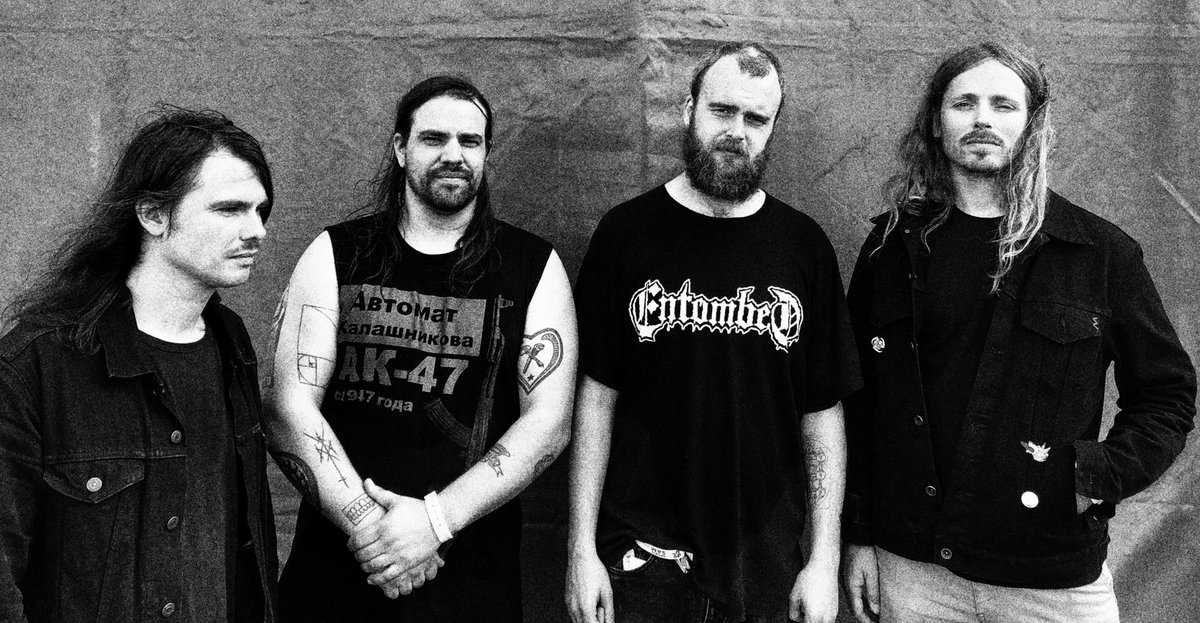 Living Gate is a supergroup that doubles down on the essential elements of traditional, old-school death metal to great effect. Deathlust is our first taste of their ideas, all of which seem pretty good to me.

When it comes to supergroups in metal, it’s genuinely a mixed bag. When it works, it can be a beautiful thing; just see this year’s Azusa release. However, more often than not, these amalgamations are rarely worth the listener’s time. Today, we’re talking about a new group of humans that have come together from their respective acts to lay down some death metal under the moniker Living Gate. Aaron Rieseberg (YOB), Lennart Bossu (Oathbreaker, Amenra), Wim Coppers (Oathbreaker, Wiegedood), and Levy Seynaeve (Amenra, Wiegedood) have joined forces to record an EP titled Deathlust that seems to be as much about tribute as it is about attitude. With a diverse group such as this, we can expect top-tier efforts from all of the players involved, but how does their debut fare overall? I’m glad you asked.

“The Death Of Consciousness” is the first track to assault the listener’s ears, and begins with a little 1-2-3 across the toms before the riffage and growls begin. It’s a simple start that telegraphs the sort of blue-collar attitude of this release. There could be frills, sure, but they’d rather just go straight with no chaser. That of course doesn’t mean that this is pure caveman metal, either. Even on this first track, there are lots of little wrinkles in the timings, moods, and some fun shifts that feel like tributes to the forefathers of death metal such as Morbid Angel and Entombed. There’s no denying the influences here, and at times it may feel a bit more like an homage than a fresh take, but in this case, I think that’s the point.

On the production side of things, I felt like the vocals may have sat a little too far back in the mix at times, but everything else feels crisp and ready to burst at the seams. The bass gets some really nice moments to shine on the title track, which also features some of the best riffs of the EP. This song also gets even more old school with some soloing that feels ripped straight from the early 90’s scene, and it’s tasty as all get out. I’m a fan of those early death metal approaches where the solos feel unconstrained and slightly manic. “Heaven Ablaze” is where the band shines, however. The galloping chromatic riffing is incredibly tight, and the song feels like a bit of a pressure cooker from start to finish. I think this one is where they put their stamp on the genre to a greater degree, and that makes it my favorite on this release.

As the final track, “Living Gate”, fades out, I came away with the feeling that this is a solid little EP, but maybe lacking in identity in some ways. Perhaps, as I stated before, that was all part of the plan: double down on the building blocks and let things progress from there. If you’re looking for a slightly fresh take on this era of death metal, Deathlust will more than do the trick, so long as you’re satiated after this five-song appetizer. The biggest takeaway from my time with this EP is that I definitely want more. I want to see where this collective can go. Even if there are no massive leaps in style or approach, perhaps a full course will be more satisfying in the end. This is, however, a great start with excellent songwriting and tight technical riffing, and the attitude is right in line. Metalheads should not miss this one.