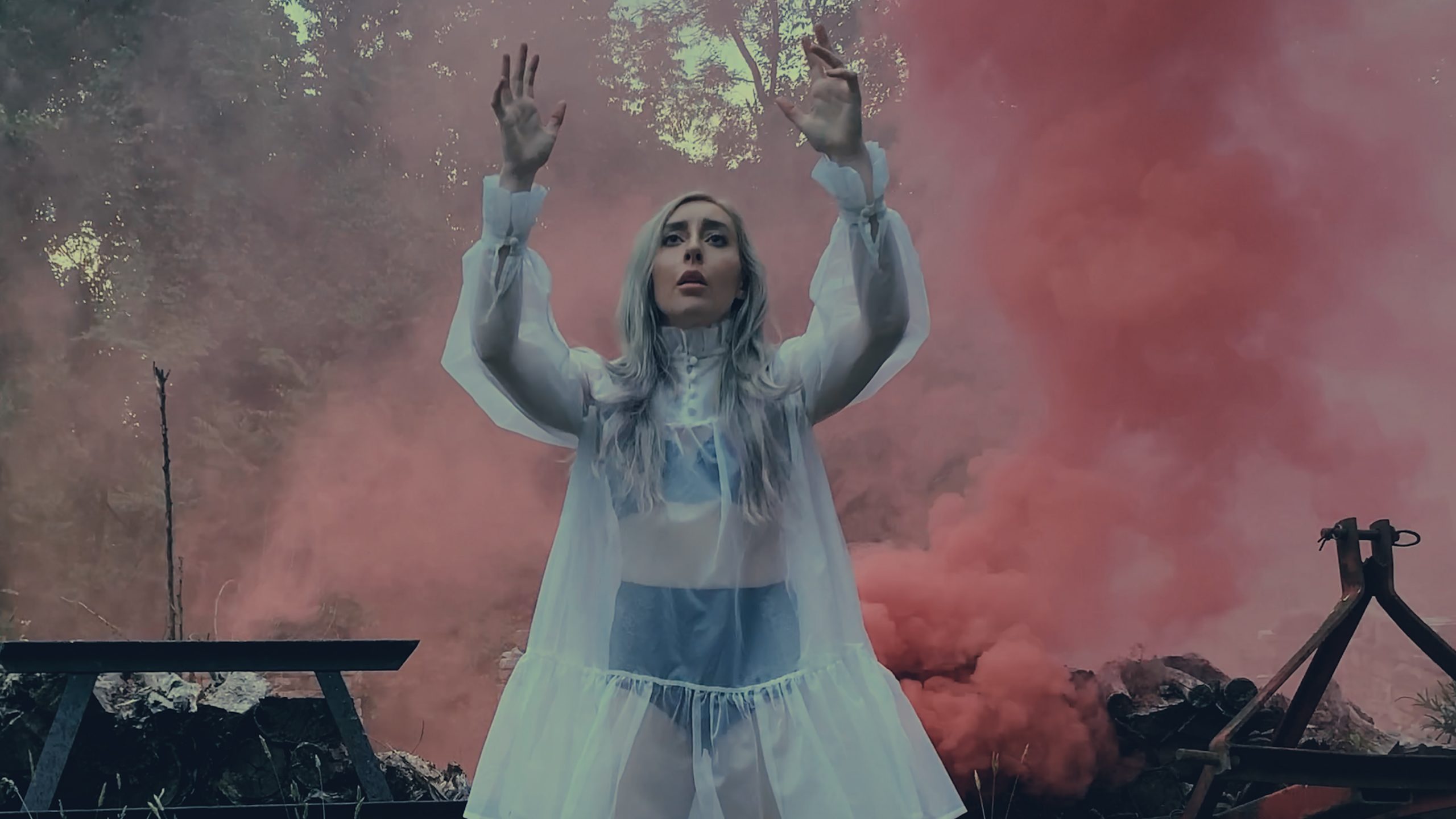 By David RodriguezAugust 5, 2021 No Comments

SINNER GET READY is an impenetrable, pained, indefinable blow of an emotional experience that goes far beyond any review or critique could hope to capture.

The first time I listened to SINNER GET READY was when I was walking in the rain around my neighborhood. I do this regularly to stay active, usually with no rain, but the weather had its own schedule. If you’re a believer of Judaism, you’ve likely heard ‘man plans, and God laughs‘ in either English or Yiddish. Really though, it became quite symbolic of my experience of Kristin Hayter’s newest harrowing masterpiece as Lingua Ignota. The rain added an element of elegance and beauty to my walk, but the cold and gloominess quickly set it as my clothes became soaked and my steps more labored.

SINNER GET READY, aside from being one of the most fierce titles of any album I’ve heard in recent memory, is just as much indebted to darkness as it is the light. Staunch devotion encircles each and every song, as does an air of corruption and desperation. The music, folky in overall tone, is nearly absent of the harsh elements that CALIGULA unapologetically dripped in, instead employing a more understated approach. Organs, banjos, bells, various woodwinds and percussive instruments are just some of the things you’ll hear throughout the album’s near-hour runtime. But where this collection of songs doesn’t overwhelm you in pure sonics, the lyrics, themes, and execution certainly will.

In Hayter’s own words from an Instagram post, SINNER GET READY was a mission ‘in which I seek but fail to find God in God’s Own Country, in which I find betrayal and abandonment, fear and loneliness, judgment‘. The scene of this mission was Pennsylvania, where the album was conceptualized, written, and further given flesh. You won’t hear the industrialized bustle of cities like Pittsburgh or Erie here, instead it is rapt by the Appalachian country and the rural, storied history of Amish communities in the state. It’s… a lot, deceptively dense given descriptions people like me would and could write on its comparative sparseness.

Like so much music being released right now, this album was formed under a great isolation, partly purposeful on Hayter’s part as she entrenched herself in the middle of nowhere in Pennsylvania from San Diego (itself surely an anxiety/depression trigger for anyone); partly because, well, pandemic lockdown. Hayter states in the same IG post as before, ‘I gave my pain a place, and the place is named Pennsylvania, and the record unfolded in tandem with the pain, and the landscape entangled me further.‘

Assisted by Seth Manchester and Ryan Seaton who both play several, several instruments throughout, the focus is still keenly on Hayter and her absolutely stunning operatic voice, honed from years of singing in church choir when she was younger. It reaches heights you’d expect it to (“THE ORDER OF SPIRITUAL VIRGINS” alone is show-stopping) and rarely breaks that character. One such place where it does is in “I WHO BEND THE TALL GRASSES”, a cryptic beckoning to God to slay a man. A persistent organ played by Hayter herself undercuts her own vocals that are truly, hopelessly distressed, marked with a drama unfounded elsewhere on SINNER GET READY. Her voice harshens at the end of especially violent lines, and nearly breaks during the impassioned beseeching of a lord most high.

‘Take hold of my gentle axe and split him open!
Gather up my quiet hammer and nail him down!
Use any of your heavenly means, your golden scythe!
Your holy sword, your fiery arrow studded with stars
I don’t give a fuck, just kill him, you have to, I’m not asking!’

The way instrumental performance disturbs and rustles you is likewise unexpected and unconventional. Near the end of the first track, “THE ORDER OF SPIRITUAL VIRGINS”, there’s a sudden, startling sting of cacophony; a piano being slammed upon, which seems to trigger a quake of other noises to join in as if the ground underneath you will give at any moment, spilling into hell below. “MAN IS LIKE A SPRING FLOWER” ends with an oncoming freight train of an escalation, taking the layered vocals and music performed, and heightening the volume to near-maddening levels before cutting off abruptly to a quiet audio clip of an Ohio churchgoer defying early 2020 COVID rules and recommendations to attend service.

She is adoringly steadfast in her convictions, though misguided as to the gravity – and realism – of the situation, claiming to be covered in Jesus’ blood which will protect her and her peers from spreading any illness. There’s a couple other similarly placed clips throughout SINNER GET READY, though this one is the most affecting to me. “MAN IS LIKE A SPRING FLOWER” takes words directly from a 16th century book called The Heart Of Man: Either A Temple Of God, Or A Habitation Of Satan, Represented In Ten Emblematical Figures that seems to explore the nature of man and promote a godly existence. The lyrics, delivered in Hayter’s multifaceted choral approach through aforementioned layers and multitracking, employ that theme in a deftly poetic fashion:

This, coupled with the audio clip of a dangerously devout woman, seems to lament man’s – humankind’s – stubborn nature and how religion may encourage or sway someone to behavior unconducive to a neighborly, caring disposition. Intended or not, it cuts especially deep as the last several years have been marked with fanaticism of many forms – some well-intentioned, others malicious from inception – that one wouldn’t be exaggerative in describing it as a slow burn ruination of ourselves and each other, a theme ripe for the music of Lingua Ignota. 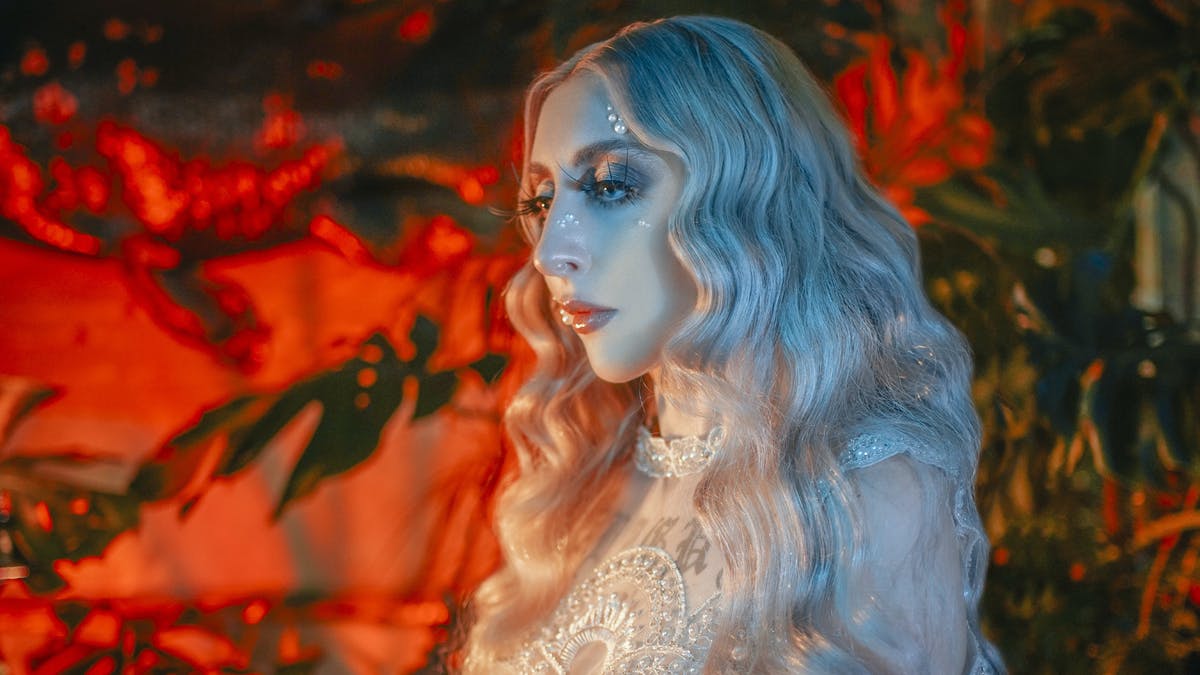 It hit me like a car a couple days ago: SINNER GET READY is like an A24 film – an intense, off-putting layer of grit and doom hidden by a disarming, folkish peace as thin as the air among high Appalachia, a veil designed to be shattered by the dark reality of the situation. Although the music professes undying, unnerving love to God, it also shows its betrayal to those who ensconce that love and faith deep in themselves. It shows the historical context in which those seeds were planted and, in part, what we have sewn from it in modern times. The regional backdrop it uses is one of great beauty and repute, but doesn’t shy away from the painful corners tucked away in its hills, at least as experienced through Hayter’s eyes and given soul-stirring expression through her music.

Where CALIGULA was explosive and caustic, the vengeful offing of the hand that oppresses, SINNER GET READY is more focused and deliberate; less reactionary and more baked in with its articulation. It’s a different beast entirely from what Lingua Ignota has released before – and from what else we see released across several musical realms lately – but still unmistakably something that only Kristin Hayter could create. I can’t even begin to give words, at least in the meaningful way they demand, to the notion that she’s one of the most important figures we have in music today. Whether she wields her rage like a fiery sword or constructs sorrowful lamentations, you can always count on them being immensely impactful, capable of tearing down even the most bulwarked dispositions, and unlike anything you’ve ever heard before.