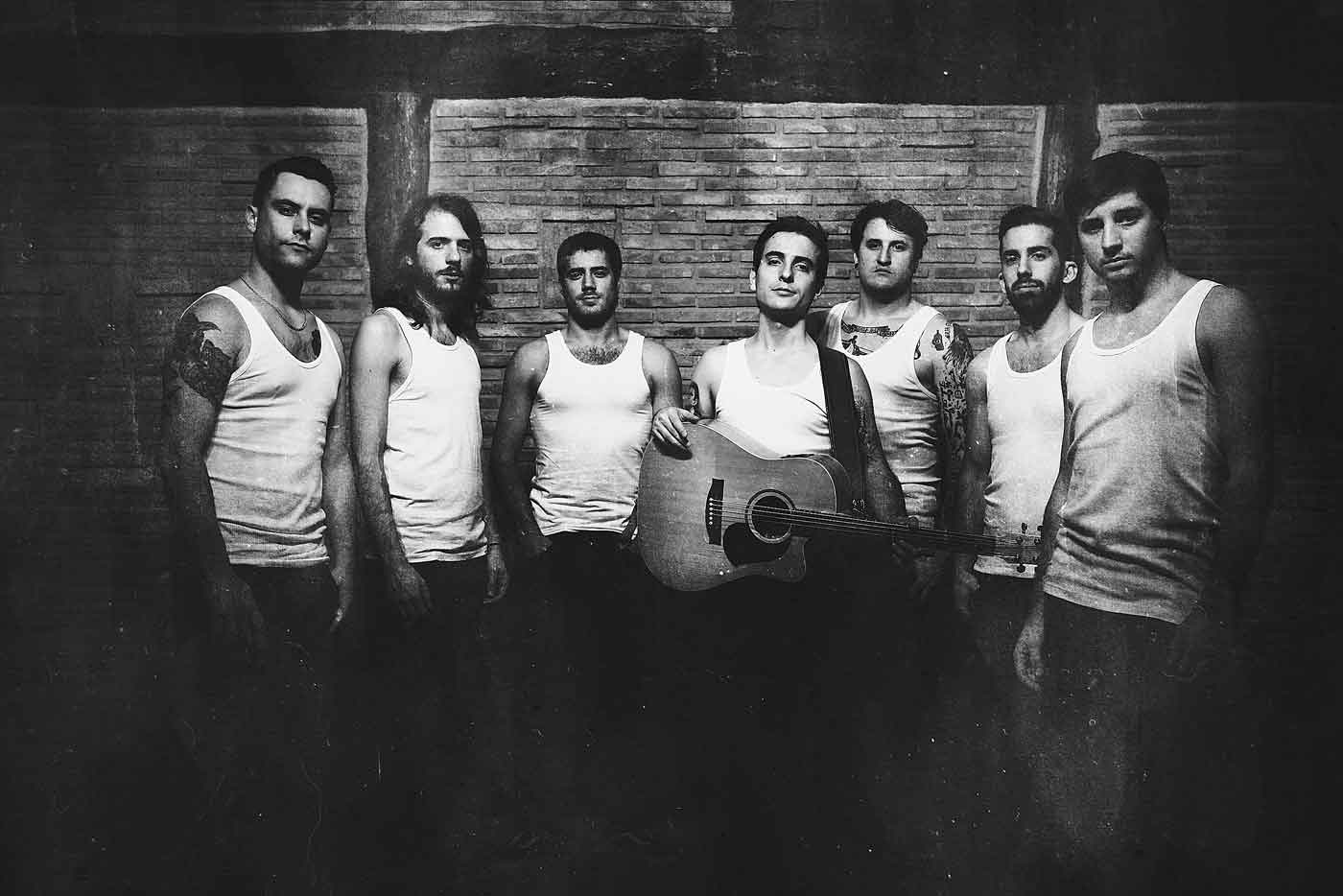 By Rodrigo Torres PinelliJanuary 23, 2021 No Comments

La Maravillosa Orquesta del Alcohol steps back as they focus their energy on sound and depth in their latest release, Ninguna Ola.

Well, folks. What you are about to read is the result of a lesson I learned while listening to this record. Stick with me for this one, for it might spark something in you as well. This is as far from coaching as Metallica is from EDM, so do not be afraid. In the need of bestowing to our community the stream of consciousness I was led into, Ninguna Ola will, ironically, feel the opposite of what its name suggests: ‘no waves’. As I further develop my points in this review, be sure to enjoy the music as well.

From an early stage in my life, my parents granted me music records to listen to. Most of them were from English-speaking bands. You know, the greats, the ones you have embraced immediately. In that sense, neglecting music from my own country (Argentina) and my native language allowed me to absorb huge loads of other music that shaped my taste and style. As I went on to school and continued to develop my personality and musical endeavors, Spanish-speaking acts were the lesser. Of course, I could not ignore Soda Stereo or Serú Girán – I just was not into them. Language threw me off them. Weird, right? Though I could not understand English lyrics, I preferred them. They flowed better, and that’s all I cared for at the time.

However, this preference turned into an intentional block as time passed. I cannot state the exact moment when this happened, but it was tangible. I would not even pay half the attention needed to a band if it was Latin or Spanish. My snobbiness had turned on that filter at max level. The cost of overlooking magnificent pieces of work that were worth noting, in the end, was not manifest until I had to review this album, and I’m glad. By no means this is me saying ‘sorry’ to anyone because I have no regrets at all. Yet, I am now aware of how arrogant I might have been with friends, colleagues, and people when discussing records.

Aside from what this record unleashed within me, there was a review I was supposed to write. It took me a few days to sort out how I would approach this piece, considering that Ninguna Ola‘s MVP is the vocalist singing in-depth truths and metaphors. Then I figured that if I was arrogant enough to deliberately sabotage my friend’s records, that same arrogance could help me build a case for this album. I will try to be as fair as I should have been then.

After this unnecessarily extensive intro, here’s my best effort in going over this beautifully articulated record. Hopefully, it will draw your attention. Also, go and check the albums you might have ignored on purpose as a surprise may be coming your way. Consider that I will not delve deeply into the lyrical meanings of the songs for the sake of addressing the broadest audience. Feel free to drop a comment if you are interested in them. I am happy to discuss or translate them to the best of my abilities.

La Maravillosa Orquesta del Alcohol, stylized La M.O.D.A., was way off my radar, so, when listening to them, there wasn’t any context. The very first impression I got was relatable to this Joaquín Sabina meets Ska-P – see, I’m not any close to being literate in Spanish music. Anyhow, it wasn’t as captivating as it turned out to be once I investigated them a bit. That’s when I came to notice that La M.O.D.A.‘s rising career stands heavily on their live performances. They enlighten their audience and spark them the energy required for singing along the entire show. Here’s a link to one of their live performances before the release of Ninguna Ola. Be sure to check out the connection these guys have with the fans.

One could say that La M.O.D.A. draws from rock, folk, and indie to establish the building blocks of their songs. Then, relentless heartfelt melodies settle down the band’s aura, nourishing songs into anthems, as you can see in the video above. Ninguna Ola constitutes a slight departure from that style and drive as the band embarks on a journey towards growth and maturity. It will probably take a little juggling incorporating the new songs into the band’s rotation during live shows. It’s a different type of flow, but it still does flow. Though the band’s essence remains untouched, breezes of new air visit in this 35-minute album. I’ll come back to this in a few moments. Let us talk language once more.

When it comes to singing, the Spanish language is complex – not necessarily because of the number of verb tenses (17), but due to differences in its pronunciation and phonetics – compared to English. Its cadence is unmistakably recognizable. Yet, it provides more natural staccatos, the strong pronunciation of certain consonant letters, that can easily disrupt the rhythm if not articulated properly. The Spanish language is also subject to heavy accents from different regions. Nobody speaks better than proper Spaniards, like La M.O.D.A.‘s singer and songwriter, David Ruiz, who happens to twist phrasing and accents in a way that even speakers will get deceived by.

Getting a hold of these movements can be puzzling for non-speakers. I’d love to be in that situation and paying attention only to the lyrics dancing, not being able to understand what they actually say. Just by contemplating this aspect, you will find elegance and spirit in the singer’s delivery, who, at times, blends melody with spoken-word verses. It is probably the same perspective I have when listening to Alcest or Rammstein. Would you agree?

As far as the overall feel and style of the album, Ninguna Ola finds the band reconsidering the way they make an impact on their audience on a sonic level. The darker yet lighter mood kinda corresponds to the Great Pause we’ve all been part of during 2020 – and along 2021, so far. However, the shift in musical direction had probably been decided before the pandemic as the band was supposed to record the album early that year. Even though you can appreciate all the classic aspects of La M.O.D.A. in this album, the way they are interchanged and blended is stripped down compared to previous releases. This provides the perfect atmosphere to magnify the melancholy the songs have and focus on improving the sonic quality of every tone. They nailed it, thankfully.

Another fact to point out of this record – and the band itself – is the diversity they bring into the picture. Throughout Ninguna Ola, you can spot guitars, banjos, Hammonds, acoustic drums, samples, accordions, different bass tones, woodwinds, and more. Here, the rest of the guys perform accurately whenever the melody asks for them, keeping the album fresh and engaging. Orchestration is key in albums like this one for there only a couple of full-fledged band moments. Most of the album’s music feels layered in support of melodies and vocal parts, hence, denoting a different approach to the production style.

Layering a part in a way rather than another might swap the whole vibe. In this case, I felt every instrumentation on point. My personal favorites take place in the song “Semifinales”. The guitars rest the chord progression upon the Hammond intro, which evokes a gloomy though comforting bed for them to lay in. Then, you can perceive the banjo drizzling beautiful mid-high frequencies to that progression, as the singer goes over the most heartbreaking moments of the record.

The last piece of thought I would like to share has to do with the lyrics, inevitably. As I mentioned above, this album became a big deal to me due to its lyrics. Considering all the aforementioned drama I explained, it’s clear that my block came back to bite me as I fell into the flow of the melodies. At first, I only cared for how the verses progressed through the music as being just another instrument, and not a very important one. Nonetheless, it was impossible not to discern moments where certain rhymes and rhythms denoted audacity and cleverness. One example is the awkward starts and stops of the melodies in “Conduciendo y Llorando”. Another could be the verses in “Barcos Hundiéndose”. Here’s a little treat for all of you who paid attention in Spanish class:

As you listen to this song, you can pick up how the verses, usually, align with the 7/8 groove carried by the drums. One could expect this verse, which comes after the first chorus, would follow a similar path. It does not. After the second line, the melody departs during the second and third lines as it comes back to the rhythm in the fourth. Those variations create uncertainty in the listeners as to what to expect next keeping them engaged. Regarding what those lines actually say, David encourages the audience to challenge themselves into asking the questions that never are, as they get immersed in their daily life. This intention probably had an effect on me, leading me into writing this piece.

Ninguna Ola constitutes La M.O.D.A.‘s boldest move in its musical career. Careful production heightens the melancholy brought by the songs in a way the band never dealt with before. Yet, its character stays the same. I can easily picture the audience singing along to the lyrics of “93 Compases” or “Barcos Hundiéndose”. Musical diversity speaks of the band’s open-minded vision of what they want to be or how they’d like to discover how they want to be. With nothing more to add, make sure to check these guys out and enjoy a laid–back album filled with vitality and determination. ¡Felicidades, chavales!

Thank you very much if you made it this far. This has been the most personal review I had to make for Everything Is Noise. To be honest, I do not know how many pages provide this degree of liberty when reviewing a record. Again, be snobs. Snobs are great, just be sure to manage your arrogance and fact check yourself from time to time. It’s humbling.