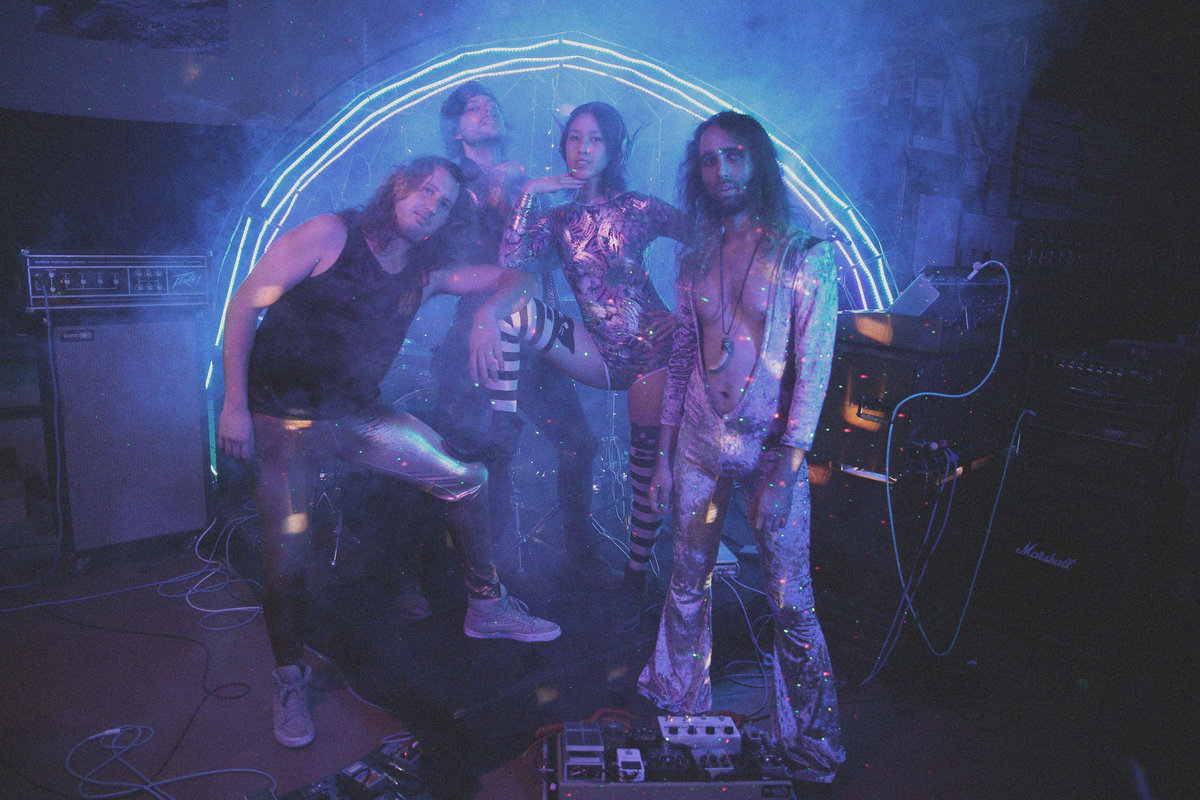 By David RodriguezAugust 20, 2020 No Comments

Out of nowhere, four heroes appear to slay the evil that is boring music. King Gorm are retro in many ways, all of them charming, all of them worth your time.

Back in the day (look, it’s been a long couple years and my sense of time is all but dissolved), I took a little a little look into the world of Old Man Wizard. I reviewed their 2018 album Blame It All on Sorcery, I spoke to Francis Roberts from the band for our Weekly Featured Artist column, and while I have nothing to show for it currently because that was all hosted on our old site, you’ll just have to believe me that I became enthralled with their lore and sound. They’ve since been quiet until very recently when they announced work on a new album, but Roberts had something else up his sleeve…

First, if you think we’re leaving wizards behind, think again, because his latest project King Gorm is wizards+. More specifically, a whole-ass D&D-esque campaign; a story and concept wrought in high fantasy about four heroes setting out to save Irondale. Joined by Erich Beckmann on bass, Dylan Marks on drums, and Saki Chan on keys and synths, Roberts’ guitar and lead vocals take us on a veritable progressive rock adventure styled after the ’70s hits we’re all familiar with. So put on your robe and wizard hat and prepare to take off on a voyage where you’ll need two axes – one to slay demons and one to slay some riffs.

The fun begins after a small intro piece shifts straight into “Freedom Calls”, the anthemic start to the story and call-to-arms for our heroes. Pretty immediately, you get that classic Hammond organ sound, one of a couple different keyboards you can hear on this album. The song is kinetic, utilizing super-harmonious vocals in the hook and driving riffs throughout. It’s a contagious mood – you want nothing more than to be out and about, marching diligently across a field to your destination, or proudly and confidently riding a horse to where you gotta be. The guitar solo is one of the most appetizing ones I’ve heard all year; not too shredding, but melodic and magnificent.

From here, things really open up. Though you can rock your ass off all you want, some diversity never hurt anyone. The base of everything is still very much rock, but the band have a story to think about, one with ups, downs, and places in between. “Four Heroes” is a bit of an introduction to such, but the details are mostly kept in the instrumentation. Roberts croons ‘Four dreams direct me elsewhere; I know that we’ll succeed / Four heroes ride again / Four omens show me where to go / We ride through shim’ring rain‘, while keeping the best for last, showing off a spacious, star-pocked sky for the protagonists to trek under. A beautiful, gentle instrumental section continues on long after the lyrics end, getting creative with how King Gorm use exposition and build up anticipation.

This gives way to a grimmer set piece with “Irondale Burning”. It’s all instrumental – no effects, no people screaming, no vocals lamenting the destruction – just forlorn keys, pensive guitars, and a lot of room to imagine. It’s simple, avoiding any threat of becoming overblown, which is a little rare when you deal with epic progressive rock. We move onto a more bluesy affair in “Song From Brighter Days”, channeling a small amount of Pink Floyd. It’s a ballad of the album with soft synths (including some ruminating and dramatic Mellotron) and moaning guitar in the background, Roberts’ vocals being the focal point of the piece.

What King Gorm excel in is a strong execution of this heavy rock formula, layering on the story but telling it in ways that go beyond lyrics. This is by design as a lot of the singing sections of these songs don’t go past the halfway mark often. The amount of instrumental passages and tracks dedicated to musicianship rather than raw, traditional storytelling doesn’t exactly lend itself to a cohesive plot, but they pull it off well. As we gallop into action on the back half of the album starting with “Beyond Black Rainbow”, which incorporates some Iron Maiden power in its riffing and energy, we get our climax in these last few tracks. Just as much, if not more effort went into the songwriting to ensure it’s consistently engaging throughout its 40-minute runtime.

Catchiness seems to have prevailed above all, just as our heroes seem to do by the end of the album where the underking is slain in – go figure – “Slaughter The King”. Something tells me this story is far from over; this seemed like a step in the right direction, but has evil been adequately pushed back in Irondale? Do more villains lurk deep in the forests, caves, and on corrupt thrones within this land? It’s all unclear, but for as epic as this tale is, it does seem unfinished. To clarify, this album feels complete, but almost too succinct for its own good. A first, maybe second act if you will. By the time the credits roll as it were with the track “Ultimate Reality”, another stellar and wordless prog installation, I’m left wanting more. I hope if nothing else this signals the pending return of King Gorm in the future, giving more closure to our heroes four, not to mention exquisite guitar work and synth baths the likes of which have been a highlight of this year so far.

Unexpected projects like this are great because you’re only allowed so much hype before you either plunge in or don’t. Me learning of King Gorm on the literal day they dropped their debut (a day after my birthday, mind you), and subsequently embarking on my first of many listens, worked well in that it gave everything a more striking and awesome quality, like finding legendary loot when you least expect in your favorite RPG. Not only that, but the sheer execution from the quartet was just riveting to begin with, and you can’t beat that with a bat. A sword maybe, but not a bat. I recommend lovers of retro rock, proto-metal, and all manners of progressive music strap on a helm, get their shiniest renaissance faire-curated bladed weapon, and take a journey with King Gorm.