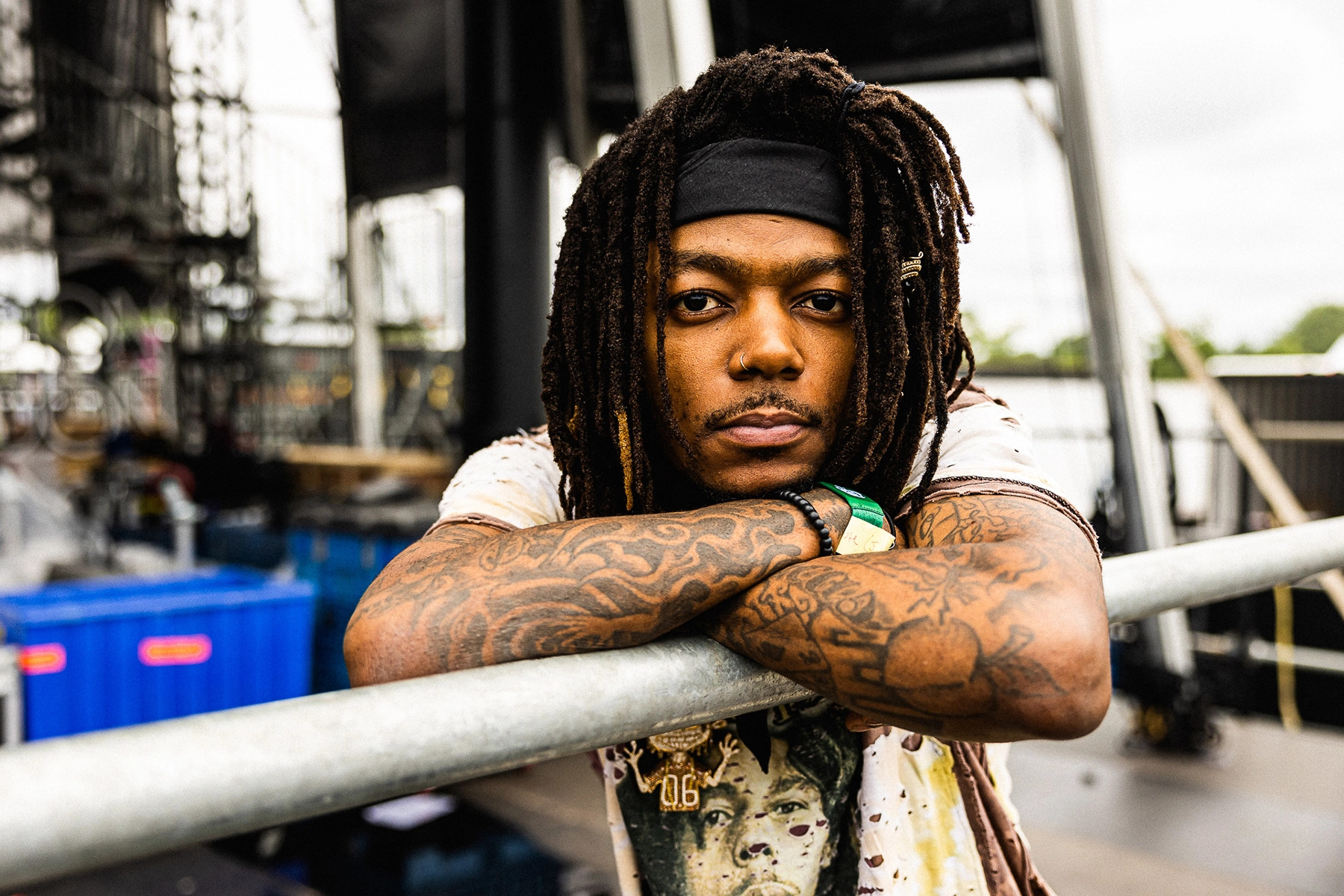 By David RodriguezSeptember 23, 2022 No Comments

JID‘s got the shit you can play for your mama and the ladies, and it’s all exceptionally good. The Forever Story is an origin story well worth hearing.

Ever since 2018’s DiCaprio 2, I’ve been captivated with JID. Here’s another Atlanta rapper with such a firm grip on the rap game, yet stands out from his contemporaries in neat, meaningful ways. It’s hard to think of others in the genre with such a command over flow and wordplay, and his features on others’ songs are sure to be a scene-stealer. As much as I love EARTHGANG, I think JID‘s my favorite Dreamville artist as well.

It hasn’t been a drought since 2018 though – JID was prominently featured on the stellar Spillage Village album, Spilligion, and dropped a few loosies here and there like “Baguetti” with Smino and Kenny Beats, “Cludder“, and “Skegee“. With every drop, you wonder, ‘Shit, is this it? Is an album on the way?‘ Finally, it’s here – The Forever Story, a loose continuation of his first album The Never Story, and even in a year crowded with tons of great hip-hop, this still manages to come out near the top.

Was there any doubt though? JID‘s one of the best out right now. Hearing the first single “Surround Sound” was enough for the hype train to derail for me, then dude dropped “Dance Now” a while later and re-railed that motherfucker so it could make it into the station. People call him Atlanta’s Kendrick Lamar and… I get it, but no. They touch on similar themes like family, belonging, upbringing, and dreams.

Much of JID‘s life is on display here, from his desire to be a football player from a young age, to the belligerence he’d engage in with his six siblings. His wordplay and rhyming intertwines them as well. “Crack Sandwich” is a standout for detailing the dynamic his family had, slapboxing each other and getting into a fight at a club after graduating high school. It’s endearing, because even as the siblings squabbled and had differences, they still had each other’s back (‘So beautiful, beating ass was like a family thing/Fighting together made us tighter in spite of how we would argue and scream‘). Bonding over violence may not get top recommends from therapists, but you make do. The production is appropriately dark and dank, like I’d imagine that worn-in NOLA club that hosted this galactic beatdown was.

“Bruddanem” and “Sistanem” are two linked songs that also capture that sense of camaraderie that JID had and has for his own. “Bruddanem” (AAVE for ‘brudda(s)/brother(s) and them’) sees him take a more melodic vocal approach as he details the depth of commitment he has for his brothers. No snitching, back each other up, and generally being down as fuck for each other. It’s a fun, playful track, but “Sistanem” (AAVE for ‘sista(s)/sister(s) and them’) is where things really shine. It’s a more personal affair, addressed to his sister who’s been a huge inspiration to him throughout the years, and how the absence of those sorts of relationships lead to him feeling lost, and JID living the newer lifestyle he has been as a famous rapper has lead to some animosity between the two.

‘Figured you was mad at me when you said you need a break from the family
And you not participatin’ in no Pagan holiday gatherings
And ever since I start rappin’, I ain’t never in Atlanta too long
And I hate havin’ to only see the family when somethin’ bad happen
Like when granny passed, I ain’t wanna answer the phone
Writin’ in my pad, hope I don’t remember this wrong
Last time I seen you, we was sendin’ her home
October, November, December was gone
But on the 25th, we gotta be there for mom‘

It’s touching and introspective, even vulnerable at times, and I get the sense that he probably gave his sister a big hug after writing a song like this and reflecting on the trials and tribulations between the two of them. JID even cleverly references his own government name (Destin Choice Route) in the middle of a verse to show how everything he’d done up to this point is a part of him – ‘Asked questions, choices, destination, courses/Highways, routes, Royces rollin’ voices‘.

This is all great and gives The Forever Story some real heart, but if you’re here for the bars, well, then you need to hear “Raydar”, which is one of the best songs I’ve heard all year. Not only is the production absolutely fierce, but nearly every line is quotable with advanced wordplay or just plain old truth telling.

‘They got the people in office
Them crackers that had us in chains
They make the laws, they goin’ hard
Dang, they even started a gang
How you gon’ win in a losable game?
…
In the danger, ni**as been endangered
Been indentured, now my ni**as got business ventures
With my nine, I’m like ten Avengers
Snap a finger, I could end adventures
Rapper, singer – no, killer, ni**a
You a cop or you a ni**a killer
…
We take our charge, we take our place
It’ll take our hearts, it’ll take our faith
But we need the majority to make shit shake
I’ma get me a quarter, I’ma get in a car
And I’ma get on a call and go state by state
And I’m picking the target, then I’m picking them off
You better be Beyoncé if you say my name‘

The beat switch in the middle is hard as fuck, and it’s not the only song that does this either (the one in “Surround Sound” is grimy, and “Stars” is whimsical with its switch for Yasiin Bey to glide over with a verse). Flows are traded out regularly, mid-verse even, to make this an ridiculous tour de force on all levels. You need to hear “Raydar” if you’re a rap fan.

The whole point of The Forever Story as a grander concept was to develop JID‘s origin story more, using The Never Story as a springboard without leaving behind all the raw skill he’s cultivated over the past five years since that first album. It’s not a sequel – a reimagining maybe, or perhaps some aural DLC for that album in the form of his best work yet. And the worst part of it all? The best song on the album isn’t even on the album. “2007“, a track meant to end The Forever Story, had to be left off due to sample clearance issues (dude sampled Kendrick Lamar and Jay-Z – yeah, that was a losing fight). A damn shame too, since it’s the perfect ending for an album like this, taking some notes from Andre 3000‘s “A Life In The Day of Benjamin Andre (Incomplete)” and painstakingly detailing key moments of his life that lead him to be the rapper he is now, featuring long spoken word interludes from JID‘s father and J. Cole. If you listen to this album, make sure you tack “2007” onto the end as the artist intended. It’s a phenomenal finish.

Aside from one very minor gripe (what the hell happened to the vocal mixing on “Crack Sandwich”?), this album is built to impress and last. I’ve looped it several, several times since it dropped on August 24, wrestling with how I was even going to approach a review like this. The answer was simple: don’t overthink shit. I get the sense that JID adopted a similar mentality when approaching The Forever Story. It’s the kind of album that feels effortless, but outright saying so threatens to insult the amount of skill and prowess on display by everyone involved. I’ll leave it at this – JID may have wanted to be on the gridiron, but he was born to hold a mic, and if this album’s any indication, he might be doing this ’til infinity.