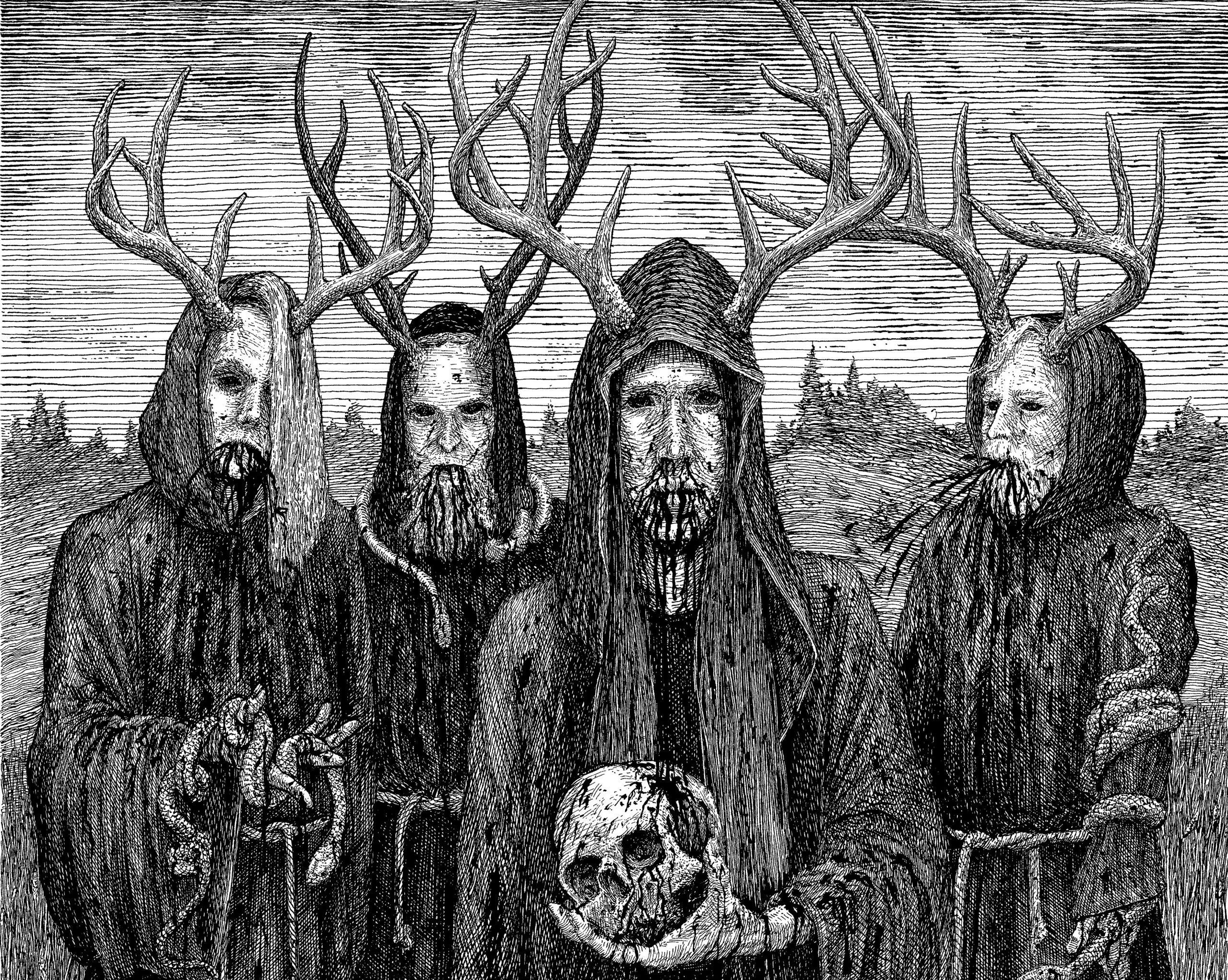 By JP PallaisFebruary 8, 2021 No Comments

Humanity’s Last Breath have created yet another dizzying musical nightmare with their newest effort, Välde.

This is it. The fiery gates of Hell holding back our penultimate demise have opened. The darkness and all things evil have been unleashed and we are doomed here on our mere mortal plane. As humanity takes its last breath, we freeze in fear and desperation due to the realization that there is no more salvation. We cannot process nor accept this reality yet we are engulfed anyways. There is no hope. Välde is here.

As heard throughout their discography, Humanity’s Last Breath are one group who don’t shy away from making the most twisted and sinister tunes that they can possibly make. Despite being part of a generally uninteresting metal subgenre that is known for being nothing but pure brutality, HLB turn it up another notch and fill you with dread and hopelessness. Välde is a mammoth of a record with how hellish and full of despair it is. Unfortunately, this album is one in which its novelty wears off pretty quickly as it is a deathcore album after all.

There are those special bands on the extremely rare occasion that truly take the genre to a whole other level, but at that point, they aren’t even just deathcore bands anymore; take Slice the Cake with their magical record, Odyssey to the West, for example. Stop reading this and go listen to that if you haven’t. In addition, there are several groups that aspire to stand out from their peers by doing something different but yet, still can’t escape the curse of being dull for the most part; Humanity’s Last Breath is one such band despite having one such a ridiculously monstrous sound. Perhaps it’s just the very nature of this genre and I am checked out of it in general. If I absolutely have to, I only want to experience having Hell rise up and swallow me whole once, not any more than that. Välde is the type of record you just experience one time and that’s it. It is only special and breathtaking that first time but after that, it loses that spark.

I would be wrong to say that this record isn’t absolutely filthy. Välde is pure savagery. The incredibly bleak and gloomy atmospheres captured throughout the songs are both haunting and devastating. You’ll find a multitude of earth-shattering breakdowns that will punch a hole through your skull as you listen. The music here is truly unforgiving, in more ways than one. Asides from being malevolent in sound, the inherent nature of HLB’s unyielding, schizophrenic style is just pure chaos. You’re going to want to break things while you listen to Välde, there is no doubt about that.

Välde perfectly captures the evil essence that HLB is known for. The music sounds immense and it is overwhelming at times. The addition of the occasional symphonic elements, as heard on “Descent” for example, elevate the music to another dark and twisted level. I really wish those elements were utilized a little more as they accent the catastrophic passages and make them more powerful than they already are. Other than that, the record is just super abstract breakdown after breakdown and it gets stale pretty fast. The overemphasis on these breakdowns ultimately only causes them to lose their effectiveness considering there is rarely a moment in which the world isn’t falling apart around you, but that is the vibe of the record after all. There is no mercy.

Weirdly enough, I find HLB’s most captivating tracks to be their instrumental interludes. That was the case on their previous record Abyssal with “För Sorg”, and it still holds true on Välde. Tracks like the opener, “Dödsdans”, is a swift punch in the gut where the song only gets more and more intense as it progresses. The type of intensity on “Dödsdans” is what I crave and doesn’t even compare to the intensity of the breakdowns heard throughout the rest. Now that I think of it, the tracks without those breakdowns end up being my favorites as these brief songs just build a massive amount of tension that leaves me so unsettled. Those build-ups and releases of tension are super satisfying and I wish HLB blended that a little more into their song structures rather than beating those breakdowns into the ground.

The technicality and pure musical skill the band possesses are undeniable, but there is a point where too much complexity does more harm than good. I’ve listened through this record many times and at the end of each playthrough, it is as if I am hit with a wave of amnesia as I can barely remember anything that I just listened to. Välde goes in one ear and comes out the other as it is a demented blur the whole way through. Each time I make it through the record, I don’t feel as if I got anything out of it. I didn’t enjoy it, but I didn’t dislike it either – I just tolerated it. It’s a fun yet menacing listen, but nothing more as the novelty and the shocking nature of the music wears off relatively early in the album.

If you go into Välde wanting something that is unrelenting and purely sinister and that is all that you want, then this record will most certainly deliver. Within the very narrow scope of deathcore, Humanity’s Last Breath are easily one of the better bands in the genre as you really can’t get heavier and more wicked than this. But again, it is still deathcore and as a result, there is very little that is bringing me back for another listen.