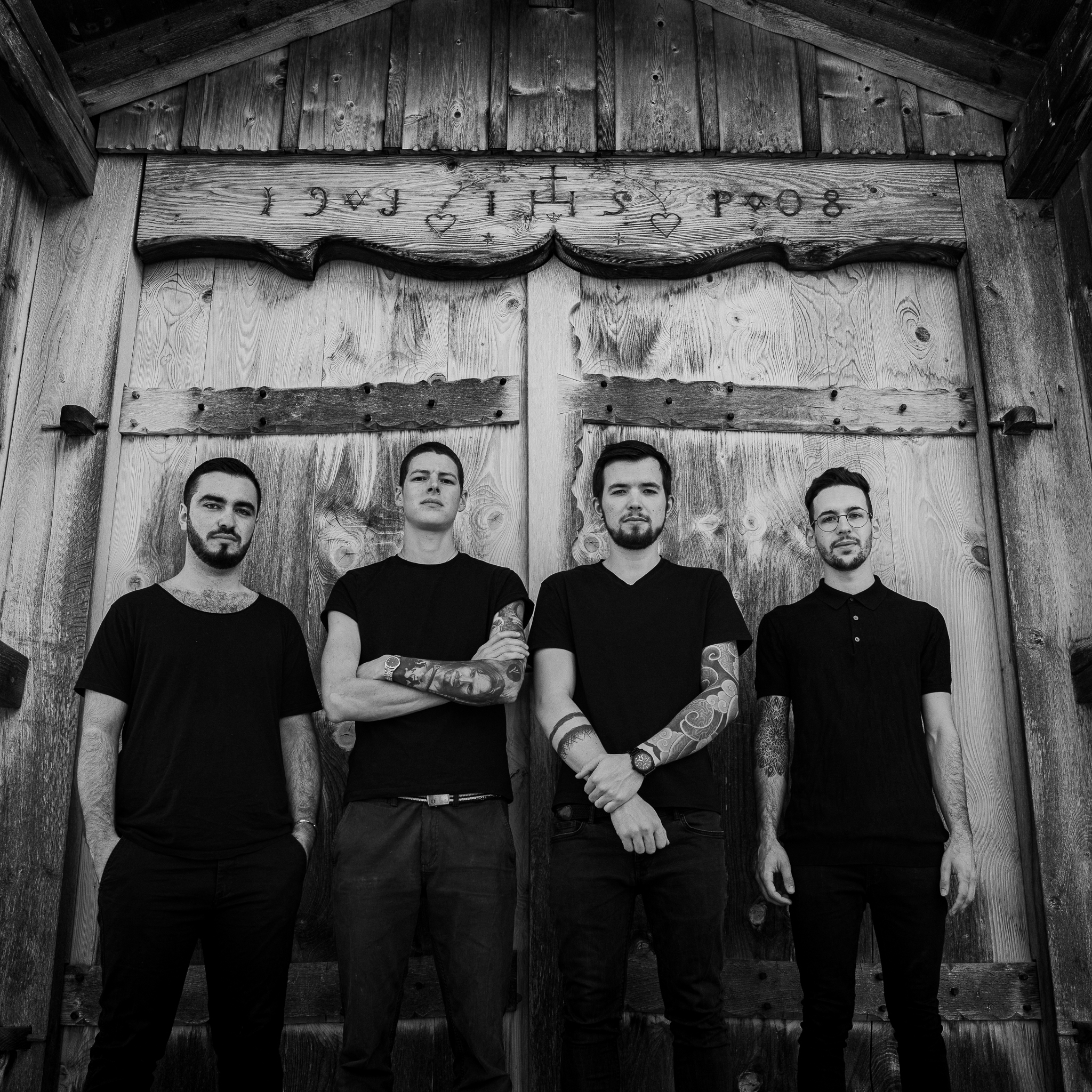 By Robert MiklosMarch 6, 2020 No Comments

Metempsychosis is an absolutely coruscating trip. It exudes beauty and depth the likes of which are rarely witnessed.

hubris. is a rather young post-rock band from Fribourg, Switzerland, having been formed some six years ago. They are made up of Jonathan Hohl and Matthieu Grillet on guitars, Lucien Leclerc on bass, and Nathan Gros behind the drum kit. Their repertoire consists of three albums to date, their newest album being released through Art As Catharsis. Metempsychosis is the title of their freshest creation, and as its name implies, it explores the ebb and flow of the life and death circle. Each of the songs is named after a figure from Greek mythology and within their body they tell wordless (save for “Icarus”) stories of decisive moments in the lives of these characters.

hubris. offer a nice description of how one of the songs follows a mythical tale on their Bandcamp page:

‘For example, the song “Heracles” tells the story of the Greek Hero Heracles, also known as Hercules. He was not only given the chance to be born in the first place when Zeus intervened at the trial of Heracles’ mother who had been sentenced to burn at the stake, but was the only mortal who was granted access to Mount Olympus after his death. The song’s repeating patterns echo Heracles’ own life, as he was constantly tried, most famously by Zeus’ resentful wife Hera. The song is divided into twelve parts alluding to both Heracles’ labours and the different stages of his life, the last two being musical illustrations of his rise to Mount Olympus and his place among the gods until the end of times.‘

“Heracles” concludes the riveting aural journey that is unwound through the course of the album, and it does so very adroitly. Stepping back a little, I was blown away by the display of nuance and depth of the album opener “Hepius”. More commonly known in mythology as Asclepius, he was a hero and a god of medicine. The one segment of this song that really hit me was the break right after the four-minute mark, which bursts out as a majestic flourish of melody that feels like it’s soaring straight into eternity. I suspect that this portion of the song deals with how Hepius became so proficient as a healer that he surpassed both Chiron and his father, Apollo, and was therefore able to evade death and bring others back to life from the brink of death (and beyond).

Second song “Dionysus” deals with the well-known god of the grape harvest, winemaking, and wine, as well as fertility, ritual madness, religious ecstasy, and theatre (and debauchery as I like to add); it aptly conjures the mythical persona, as it is a more dynamic presentation of shifting tempos and volumes,  a contrasting display of simultaneoulsy dense and loose compositional approaches. The song makes sure to not miss out on the ethereal feel Metempsychosis has already acquainted us with, and which will accompany us to the album’s very end. By now we can truly see the beautiful blend of progressive edges that made its way into this synth-laden post-rock nest of delight.

Meanwhile, “Adonis” depicts the tragedy that was the course of Adonis‘ birth and untimely death. For those who don’t know, he was the mortal lover of the goddess Aphrodite. The unusually laid back and dreamy textures that develop over the course of the song’s first half are beautifully torn out of sight with the climax that ensues around the five-minute mark. This climax is most likely the representation of his demise. We then see the song twisting into new yet familiar shapes, bearing enough resemblance to its predecessors to know it continues a similar train of thought while featuring plenty of novelty to freshen things up and keep everything as engaging as possible. “Adonis”, however, closes its narrative in the same vein it opened with, offering an interesting feel to the album’s circular leitmotif of life and death.

The fourth and fifth songs are rather intertwined since they present the story of Icarus and his father Daedalus, as they are both titled after each. I would assume that the tragedy of Icarus is quite well known. “Icarus” is a rather monotonous song when compared to the others, as it is a loosely layered, slowly expanding, ambient styled track. However, it is accompanied by a spoken word delivery that narrates with a calm cadence and tone, the very denouement of Icarus’s mythical story.

From what I can tell, the recited text does not seem to pop up anywhere, leading me to believe the band made their own narration for that segment. Even so, the song makes for a nice interlude track, giving some welcome dynamics, as well as a little bit of breathing space to the journey. “Daedalus” continues to explore variations of the beautifully flourishing sound that has been previously developed, managing to craft even more novelty within those boundaries. Along with the other songs, it feels like it does a good job of encapsulating the way Daedalus toils away at his maze commissioned by King Minos of Crete to trap the Minotaur, in which he is eventually imprisoned as well.

Metempsychosis is a spectacular showcase of instrumental prowess, conceptual depth, lush, emotive composition, and many other things. hubris. have already reached a level of overall musicianship that some bands don’t even come close to over the course of their entire career. It’s a real shame that the words aren’t as descriptive as the sounds on this record, because there is just no other way of transmitting the genuine awe that lives inside of it except by listening to it. This is one of the best rock albums I’ve ever had the pleasure of hearing, and I am very much looking forward to hearing from this band again as soon as possible. This might be a bit of a stretch, but I think we can close post-rock for 2020, as I don’t think anything can come close to Metempsychosis.